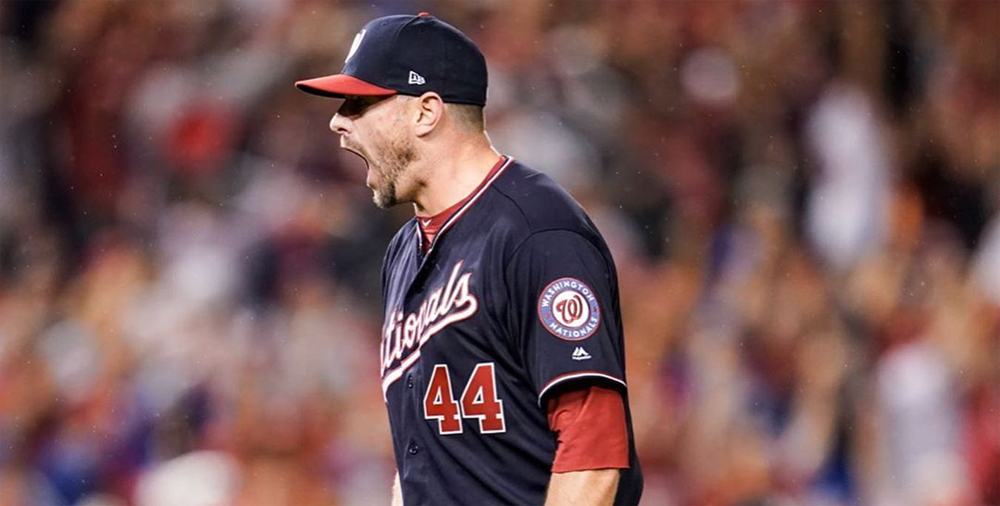 Former Blue Jays pitcher and current Washington Nationals reliever Daniel Hudson missed Game 1 of the NLCS playoff series to witness the birth of his child. This itself was a minor item in the MLB news cycle, but a select few turned this story and spun it into a referendum on paternity leave for baseball players.

There were some idiotic takes, but these two by far were the worst. Former Miami Marlins president David Samson called Hudson’s absence “inexcusable” and Jay Greenson of ESPN Radio advised Hudson to say: “Go get ’em mom and get photos.”

These tweets are getting ratio’d into oblivion. As of this moment, these tweets from Samson and Greeson have over 4,500 combined replies. 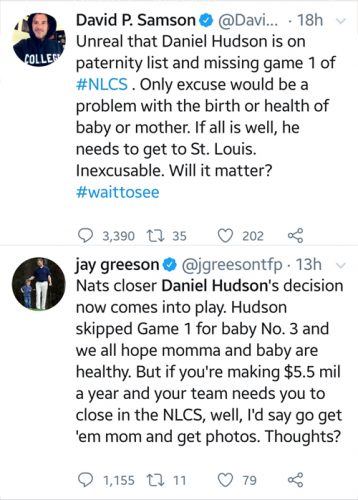 Even if you aren’t a parent (Samson and Greeson both have children), these opinions are grossly misinformed and self-centred.

Some people said that Hudson put his team in jeopardy because he was by his wife’s side for the birth of their third child. Anyone who insinuated that “he already has a couple kids, he can miss the birth of this one” lacks any empathy for parents.

Yes, Major League Baseball players have a profession that thrusts them into the limelight. They play 162 regular season games, several spring training games, and if they’re lucky, they make it to the postseason.

Because these athletes are in the public eye, onlookers might feel like these players somehow owe them something or these players owe it to their team to put their lives on hold. They do not.

Since they’re playing in the public eye for six months or more of the year, that’s a lot of exposure between fans and players. MLB players spend the bulk of the year away from their families, travelling on the road, and stationed in a different city.

Baseball players (and athletes in general) play a game for a living. In the grand scheme of things, baseball is inconsequential. It’s played for entertainment. But that doesn’t mean baseball players aren’t allowed to live their lives outside the field.

i love baseball more than most. playoffs are a huge deal. but there are some things in life, like the birth of your child, that are much more important.

if you are arguing that it’s wrong for daniel hudson to be taking paternity leave, you are the one that is wrong.

They are not slaves to their team or their fan base. These are real people with real feelings and real families. They take paternity leaves and bereavement leaves, and no one should question why they do it or how long they’re absent from their team.

It’s just a job like any “normal” person’s occupation.

For anyone to suggest that Hudson should have foregone his paternity leave to stay with his team is asinine. Some players might try to time things so children are born during the offseason, but parents can attest to this; life happens and plans change.

If the shoe were on the other foot and your workplace demanded you miss the birth of the child to stay at work, how would you feel? “Hey, I know your wife is due any day now, but we need someone to hop on a plane tonight to close a deal tomorrow. You’ve already had a couple kids, so you can do it, right?”

This makes as much sense as expecting an MLB player to miss the birth of their child, just because their team is playing the postseason.

Daniel Hudson skipping Game 1 should be a lesson for everyone. Chances are if the Nats can get by without him for a day, your office can get by without you for a day. Go do life stuff. Take a mental health day. Keep your cough at home. Everything will be fine.

Thankfully, the Hudson’s baby was born healthy, but what if there were complications? How would’ve Hudson felt if he was away from his loved ones for a family emergency? Just because the stakes are high for Hudson’s team in the playoffs, doesn’t mean the stakes aren’t high for his family at home.

It makes zero sense in everyday life and the same applies to professional athletes. This instance with Hudson’s family underscores the complete lack of empathy and compassion from specific members of the media.

Back in 2015, former Blue Jays reliever Aaron Loup was in a similar situation as Hudson. With his team in the postseason, Loup unexpectedly went on paternity leave as his wife went into labour and their son was born prematurely.

At that point, baseball, the playoffs… it’s irrelevant. The only thing that matters in that scenario is your family. Anyone who fails to see that is way too self-centred or out of touch to understand how sympathy works.

The next time you have the urge to put a player on blast on Twitter about taking a paternity leave, stop and think… would you miss the birth of your child for your job?

Some of these athletes come with a superhuman aura, but they’re regular people. Many of them excel at their job, but what they do on the field does not define them as a person. In most cases, family comes first and baseball comes second.

The birth of a child always take precedence over what happens on the field, even if it takes place during the postseason. There’s always somebody else who can fill in at work. Hudson is replaceable on the mound. In the delivery room? That’s a different story.