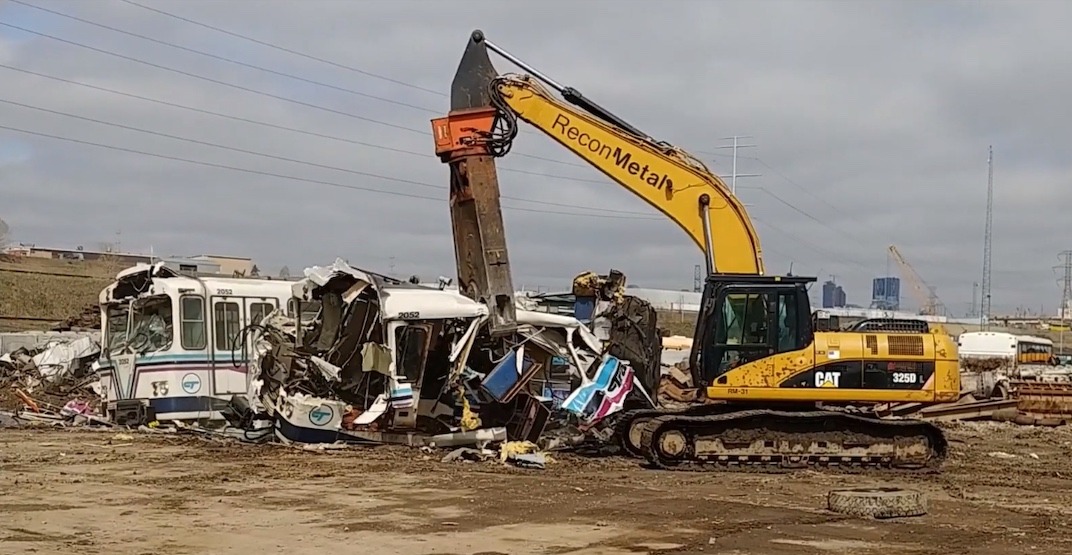 Retired CTrain cars being disposed of and crushed. (YouTube screenshot)

It is so long and farewell to the first LRT train cars of Calgary’s CTrain system, dating back to the 1980s.

Calgary Transit is well into the process of retiring and disposing of its oldest Siemens U2 trains, which were built in Germany. To date, roughly three dozen of 83 old generation cars have been retired, and they have been replaced by new generation Seimens S200 cars, which are slightly longer and wider than the original models.

The U2 cars were originally designed for the Frankfurt U-Bahn system, before being also adopted for the fleets of the LRT systems in Calgary, Edmonton, and San Diego.

A video posted on YouTube shows how the municipal government is getting rid of this old fleet, with the cars gutted and separated from their bogies before being trucked to a junkyard to be crushed.

While the cars have been mainly scrapped, some of their parts have also been saved as spares for the U2 cars that are still in use in Edmonton.

Over the years, a number of cars — both the U2s and newer cars — have been sent to early retirement following collisions that render them totalled.

Many of Edmonton’s U2s are expected to remain operational through the 2020s following a mid-life refurbishment in 2013.