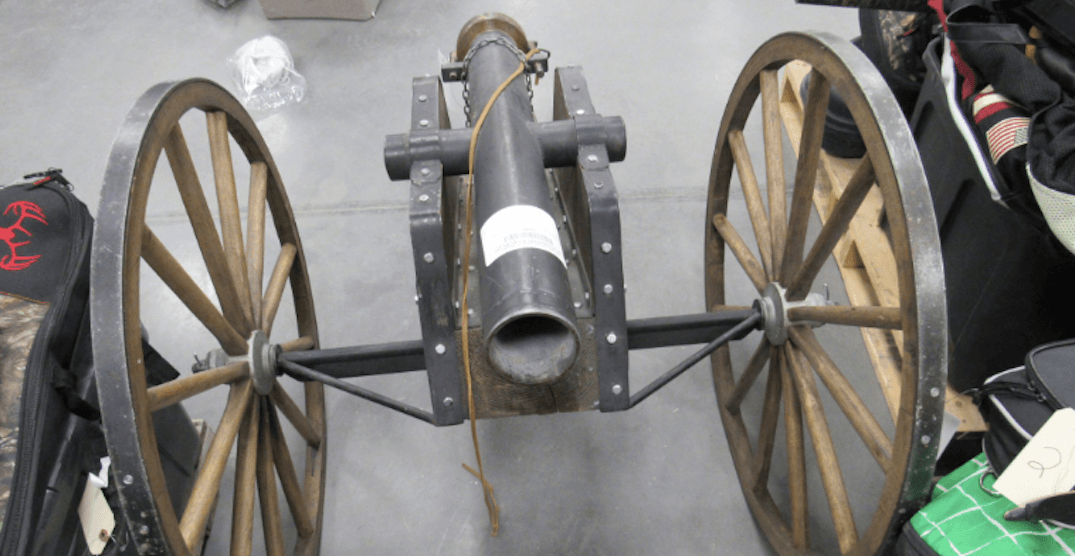 A cannon that was stolen in Calgary (cstshaw/Twitter)

The Calgary Police Service is looking for the owners of some bikes, a bag of hockey gear, a fur coat, and a huge metal cannon.

Jeremy Shaw, a Communications Director with the Calgary Police Service, has been at work on Twitter trying to track down the owners of a wide variety of stolen stuff.

While the bikes, and even the hockey gear (we are in Canada, after all), are nothing out of the ordinary, when making a public Twitter post about the cannon, Shaw couldn’t help but note how unusual a situation it was.

“Last week I posted about some stolen/recovered goalie gear. I still haven’t found the owner. Now things are getting weird though. I’m also looking for the owner of this cannon!”

Last week I posted about some stolen/recovered goalie gear. I still haven’t found the owner. Now things are getting weird though. I’m also looking for the owner of this cannon! (Case #18545114 / 4676). Anybody? #Calgary #yyc #stolen pic.twitter.com/UsI18MfKK6

Anyone with information on who the cannon may belong to is asked to contact the Calgary Police at their non-emergency number of 403-222-1234.

According to Shaw, police are also looking for the owner of a luxurious fur coat, a total of 15 recovered bikes, and that set of goalie gear — though fraudsters be warned: You’ll need to properly describe the goalie helmet before he hands it off to you.

Do you recognize this Charlebois Furs coat?

To claim the coat, you will be required to describe a feature of it that is not shown in the photos pic.twitter.com/s92r9LOTlo

Not nearly as interesting as a cannon, but I do have 15 stolen bikes that are looking to find their way back home as well. #yycbike #yyc #Calgary pic.twitter.com/dVR83NBfQ5

Anybody live in the community of #Varsity and have some goalie equipment #stolen? Describe your mask and have I got a deal for you! 🙂 cc: @VarsityVca #yyc #Calgary pic.twitter.com/b63YK5mjcH