The Calgary Police Service has been busy at construction zones this year, handing out roughly 36,000 more tickets than they did back in 2017.

According to data released by CPS, construction zone enforcement between January and June saw a total of 39,968 tickets given to Calgary drivers, with 10,443 of those being in zones where workers were present.

The same timeframe from 2017 saw 3,785 tickets for marked constructions zones, with 1,448 in areas with workers present during the same span of months — resulting in an uptick of more than 1000% between the years.

The increase, according to CPS, is not due to police increasing enforcement resources, but rather due to there simply being more construction zones around the city this year. 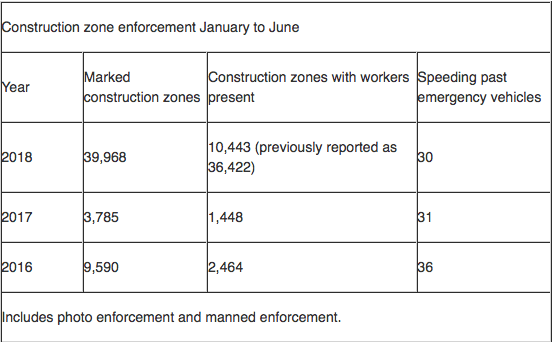 There has also been better coordination between police officers and construction managers, the release states, leading to CPS being able to access otherwise unsafe areas.

If you’re hoping to avoid becoming ticket #40,000, you should keep in mind that reduced speed zone signs are typically installed at the start of the construction zone, but if there aren’t any signs, the default speed limit is 50 km/h.