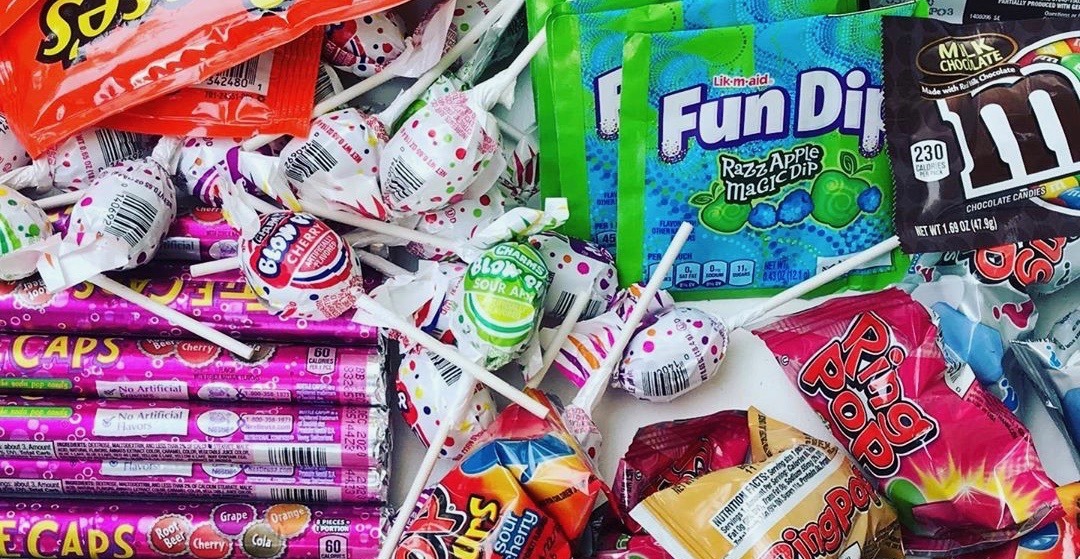 As a kid, was there anything more gratifying than biking to the local variety store, loading up on candy, and devouring sugar until your stomach hurt?

Ah yes, the innocence of childhood.

That’s why candy is so nostalgic, it transports us to our “happy place”’ the days of VCRs, cassettes, and hours of our daily lives not wasted on social media.

Tasting candy from your childhood is like taking a trip back in time.

Hop inside Doc Brown’s DeLorean with us as we rank the very worst and best childhood candy.

One of the weirder candy phenomenons from the last few decades, these gummy burgers and hot dogs were nothing special.

This is the “soap gum” that everyone was tricked into trying at least once. A fun experiment for a few seconds, but then it tastes like you licked a Dove bar.

A bizarre candy trend from the 90s which hasn’t seen a resurgence since. Gee, I wonder why?

Weren’t these just pounded down, flattened out, stretched versions of Laffy Taffy? Airheads may have had more pull (literally) and clung to your teeth like a needy cousin at a family reunion.

To the untrained eye, these just looked like Flintstone’s Vitamins in a toy garbage bin. Minus the Iron, Calcium, and Vitamin B, that’s essentially what these were.

A close cousin to Airheads, Laffy Taffy came in an absurd amount of flavours. For the most part, the flavours were faithful, but there were never any standouts from the bunch.

Weren’t Warheads a mild form of punishment? Take a handful of these, pop them in your mouth, and your sense of taste was altered for at least a week.

It was more about the lore of Pez and the art of dispensing because the Pez candy itself was nothing to write home about. At least that painstaking process of loading a Pez dispenser was some weird form of candy portion control.

Ah yes, dentists of the 90s profited off the popularity of Jawbreakers.

Sort of like Popeye Sticks, the weird similarities between this and tobacco are a little concerning. But as a kid, you had no idea what chewing tobacco was, so let ignorance be bliss and enjoy a wad of Big League Chew like everybody else on your block.

If you can combine Big Feet in concert with another gummy candy-like Fuzzy Peaches, for example, *chef kiss*. As a solo candy, Big Feet are a little underwhelming, but they don’t taste like feet, which is good.

Unadulterated sugar. So simple and yet so good. And there was no pacing yourself with these things… just pour the whole damn tube down your throat and wait for your eyes to bug out.

It’s crazy to think it was acceptable for kids to wave these things around back in the 80s and 90s.

Chop up some bubble tape, pulverize a few pieces, dump it in a container, and you’ve got Bubble Jug.

Never was it so fashionable to wear candy as an accessory. Some of the best memories from your childhood might involve pulling the string from a friend’s candy necklace and biting the pieces off, only to snap the string back. That’s what friends are for!

There’s something inherently soothing about a bottle. The makers of Baby Bottle Pops tapped into this philosophy, filling a baby bottle with powdered sugar and using the bottle nipple as a vehicle to eat the sugar.

There’s a bit of a masochist inside of people who enjoy partaking in Tear Jerkers gum. While these may have been a little more popular than War Heads, they didn’t pack as sour of a punch. Once you got past the puckering sourness, it was nothing but sweetness.

Whether it was small scale or the big boys, Sour Keys married the sugary-coating and gummy underbelly in key form, much to the delight of kids everywhere.

Very similar to Sweetarts, but Bottle Caps came in pop flavours, so Bottlecaps get the edge here.

With Gobstoppers, you get the satisfaction of having a mini-Jawbreaker, while not having to chip your teeth to work away at these things. There was always a nice treat in the middle, which was a small reward for chewing on these things for minutes (or hours) on end.

At some point, everyone’s proposed to the love of their life with a Ring Pop. Whether it was your Kindergarten crush or your steady Grade 12 partner, the relationship was always sealed with a Ring Pop.

A super solid candy still available today and stands up after all these years.

Either bite-sized or stick form, Jolly Ranchers wreaked havoc with teeth, but somehow, the pain was worth it.

As the name suggests, the perfect pack of sweet and tart.

Everyone knows the urban legend of mixing pop rocks and coke. It in fact does not blow your head off, but dammit if kids didn’t try.

Lotsa Fizz are unlike any other candy on this list. The “fizz” effect is still one of the great confectionary mysteries of the 90s and somehow felt like a sweet baking soda exploding effect in your mouth. According to Candy Wiki, ” The chemical reaction that occurs when the dry acid and dry base are mixed with the moisture in the candy-eater’s saliva produces a fizzing sensation inside the mouth.”

No one form of peaches altered the way we look at peaches than Fuzzy Peaches. It exemplifies the artificial-tasting peach phenomenon, but if you can suspend disbelief for a moment, Fuzzy Peaches aren’t all that bad

You could always tell which kids were the patient ones by how fast they devoured a Push Pop. If they made it last all day, they’re likely the courteous type. But if they just attacked the Push Pop from the get-go, it was a sign of kids that just want to get it over with.

By far, this is the best iteration of gum on the list. Whether you wanted to snap off a small piece or stuff the whole thing in your mouth, Bubble Tape was where it’s at.

If you were lucky, you could find these in the $0.25 machine at your local grocery store. For other kids, getting your hands on a box of these was the holy grail of the summer candy haul. The perfect mix of flavours (although there were always way too many orange and cherries, not enough grape and banana).

The fact is there are hundreds of Jelly Belly flavours, so there’s bound to be something for everyone. Add the fact that you can combine flavours to create Jelly Belly concoctions, and it took these jelly beans to a whole new level.

Nerds were the Pandora’s Box of candy. Sealed in their home, they’re stable and manageable. But once they bust outside those cardboard walls, forget it… mess everywhere.

Rip off the top, lick the stick, dip, lick, repeat. That’s how you create pure joy with a Fun Dip. The candy stick was pure genius as a vehicle to eat the powdered sugar and included not one but two flavours per pouch. It’s one of the simplest candy concepts and yet one of the most ingenious. That’s probably why people look back so fondly on Fun Dip to this day – because it’s the best.