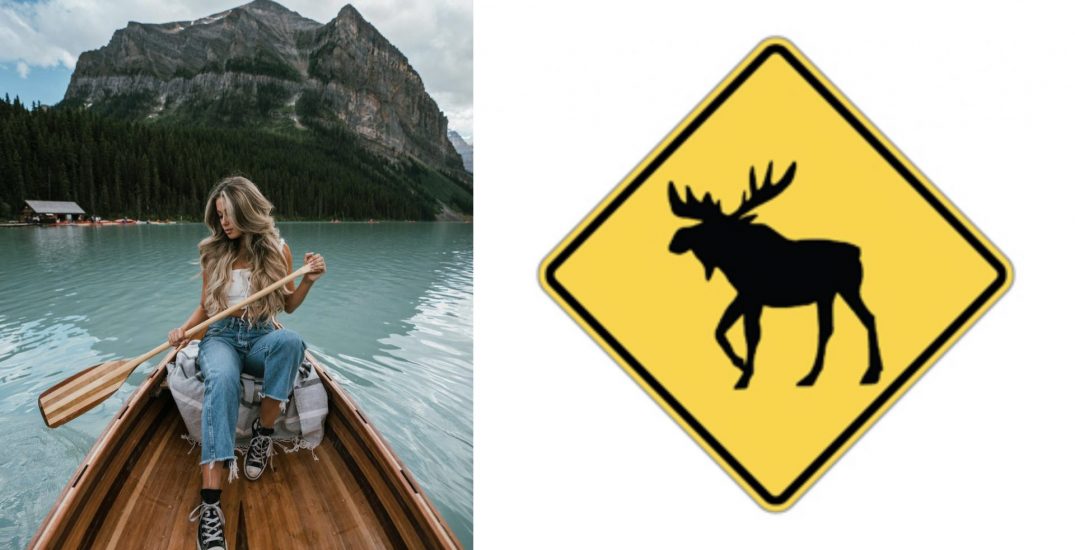 As one of Canada’s most recognizable animals, we think the moose deserves a little respect.

Social media creator and TikToker Chloë Chapdelaine seems to agree. When she was 18, Chapdelaine regularly saw moose crossing signs on her drive to work, and she decided the animal depicted could use a bit of an update.

This inspired Chapdelaine, who wanted to be a designer at the time, to draft a new look for the road sign.

Chapdelaine describes herself as being “super ambitious,” and she wrote an essay about her proposed change to the moose crossing road sign. She says she mailed paper copies to as many departments of transportation and the government as she could.

In her essay, Chapdelaine noted that the current moose on the road sign appeared as a “floppy-looking animal,” and she wrote that the current design did not portray the majestic creature that’s a symbol of Canada, stating, “We need to change it.”

She compared the animal to an elephant seal, a shark, a stick, and a number of other animals, and proposed her new design in Sharpie.

In her video, Chapdelaine announces that it took Canada about four years to accept her design, but they have officially accepted it.

Transportation Association of Canada (TAC) says on their website that Chapdelaine’s proposal was handed over to their organization by Alberta Transportation. From there, her proposed design ended up being included in TAC’s sixth edition of the Manual of Uniform Traffic Control Devices for Canada, which was released in June after a six-year-long project.

The website notes that Canada has a great deal of wildlife and, not surprisingly, many animal warning signs on its road networks. Larger animals, such as the country’s noble moose, increase the severity of potential collisions.

“In areas where wildlife is known to regularly cross a road, wildlife crossing signs may be displayed to warn road users of the potential crossing hazard,” says TAC, adding that the moose crossing sign indicates to drivers they are approaching an area where the animal is often seen crossing the road.

“Chloë’s contribution to the new Moose Crossing sign offers a more deserving representation of the moose, and its use on Canadian roads will give drivers a more accurate impression – and fair warning – of a possible approaching encounter,” says Sarah Wells, TAC’s Executive Director.

TAC tells Canadians that, over the coming years, the new moose crossing sign will take its place on roads across the country.

Earlier this fall, Chapdelaine released a limited run of moose merch, with T-shirts, long-sleeves, and crewnecks featuring her design alongside the slogan “Makin’ the Moose Out Of Life.”

Sales ran until November 14, and a portion of the proceeds went towards Canadian wildlife rehabilitation.