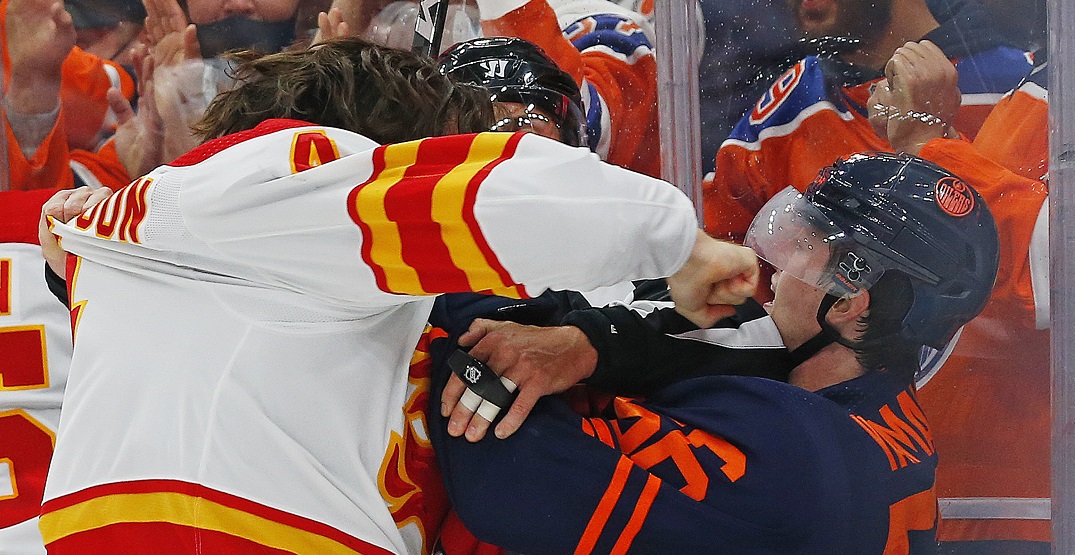 Calls for suspension of Calgary Flames defenceman Rasmus Andersson are coming after an apparent headbutt in Saturday night’s Battle of Alberta.

In the first period of the Flames’ loss against the Edmonton Oilers at Rogers Place, Andersson got involved in a post-whistle scrum with forward Kailer Yamamoto.

Andersson went after Yamamoto, appearing to headbutt him behind the Flames’ net.

Andersson was assessed a double minor on the play for elbowing and roughing, while Yamamoto was not given any penalties.

The Oilers came through with the 5-2 victory on Saturday, paced by Connor McDavid’s hat trick.

(Update: Andersson was fined $5,000 for the possible headbutt, the maximum amount allowed under the NHL’s CBA, meaning no suspension is coming.)

Calgary’s Rasmus Andersson has been fined $5,000, the maximum allowable under the CBA, for Roughing Edmonton’s Kailer Yamamoto.

But his own coaching staff didn’t even come to his defence.

Neither Andersson nor Yamamoto spoke to the media last night.

Unsurprisingly, there were plenty of calls for Andersson to be suspended from the Twitter community.

Head butt by Andersson. Dangerous play. Should be a 3 game suspension minimum.

That was a headbutt by that bum Andersson on Yamamoto.

That better be a suspension.#BattleOfAlberta

It's a clear headbutt by Andersson. Let's not sugar coat this. Suspension worthy and completely unnecessary pic.twitter.com/RZY1w7CC6R