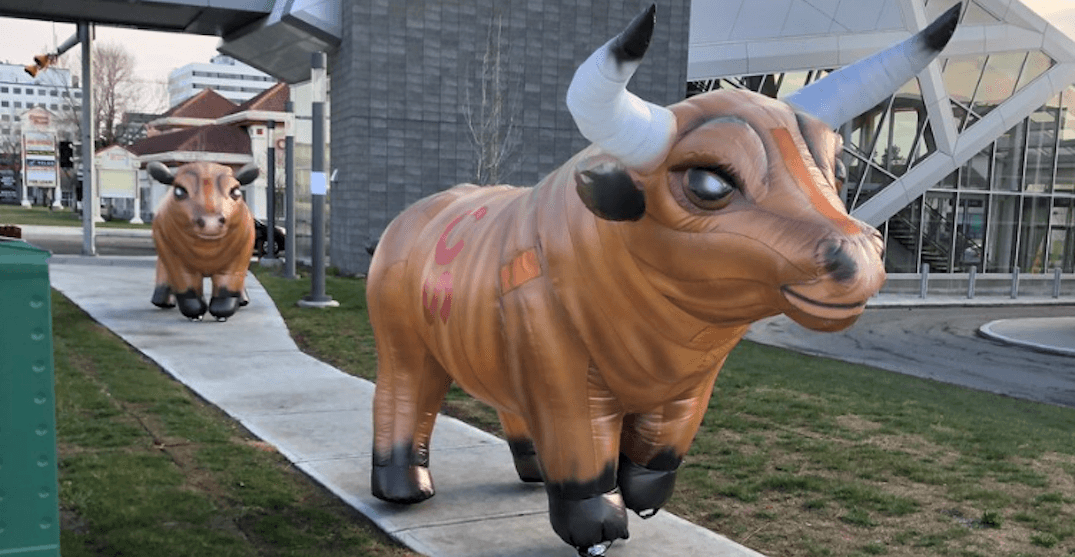 Have you seen any cows wandering around downtown Calgary this morning?

If so, the Calgary Stampede wants to know. The organization released a statement early Wednesday morning to warn Calgarians that six ‘cows’ had gone missing from Stampede Park.

The cows are described in the release as “larger than life with playful personalities” and that anyone who might spot one should take a photo and use the hashtag #foundyourcow to alert their handlers.

A quick search of the hashtag makes it clear that, no, the Stampede didn’t actually lose six real cows, but instead released some air (and person)-filled cattle to parade around the city.

The marketing campaign is being done to stir up some excitement about a “Stampede-time announcement” that is set to take place at the CORE Shopping Centre where the ‘cows’ are expected to be by noon, according to the release.

A previous release from the Stampede stated that the Bell Grandstand Show Reveal will be held at the shopping centre’s Community Stage at noon, so we expect the missing cows to be a part of the big reveal.

While the cows have been spotted by Calgarians around the city, a few people have decided to have a little fun of their own with the hashtag:

Anyone else see some super cool cows this morning?! Could these be @calgarystampede’s missing cows? #foundyourcow pic.twitter.com/OY1CFmgrGg

@calgarystampede little protip for everyone, do NOT take a photo of your partner and use the #foundyourcow hashtag as it may result in trouble on the homefront. #advicefromafriend