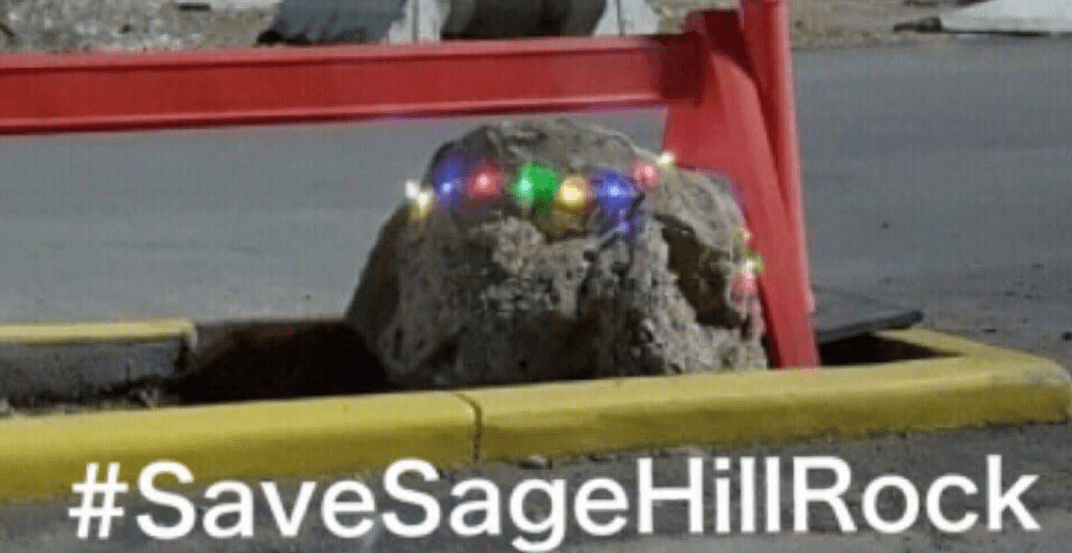 Sometimes even the most stationary of rocks can cause sheer and utter destruction.

Even given its chaotic ways (it hit three cars, after all, the monster), the Sage Hill Rock will be sorely missed by members of the community.

Newly departed from the Sage Hill parking lot on the morning of Tuesday, December 5, the rock did not leave its (blind) spot without a fond farewell.

Calgarians took to Twitter in an attempt to save the fabled rock, after an article from CBC Calgary drew attention to its troubling track-record for trashing vehicles.

As dusk settled on December 4, a red traffic cone and barrier was positioned beside the rock to stop it from harming any other drivers.

People flocked to the rock, even adorning it in Christmas lights in a futile attempt to save it, but by morning the rock was no more.

The rock may be gone from the parking lot, but not from the hearts of Calgarians, as a chorus of farewells was tweeted in memory of the destructive rock, and tributes were made to its legacy.

Some even tried to replace the rock with The Rock.

The #SageHillRock may have been removed, but it has already been replaced with a new installation… #yyc pic.twitter.com/vthLfTlUJq

Country Hills Toyota created a loving video in memoriam to the “gone, but not forgotten” rock, and even placed a Calgary Food Bank donation box where the rock once mightily stood its ground.

RIP #SageHillRock – gone, but not forgotten. 💔 😢We encourage you to channel your sadness over the loss of the beloved rock into something positive. Country Hills Toyota is accepting non-perishable donations for the @CalgaryFoodBank this holiday season! Drop by anytime! pic.twitter.com/8IvPTkDSTt

In the aftermath of all the destruction, heartbreak, and loss, Calgarians are simply left to wonder: What now?

Stand your ground #Okotok (Big Rock)! After #canadasworstdrivers exiled #SageHillRock, they may come for you next. pic.twitter.com/pgyF4dEtxq