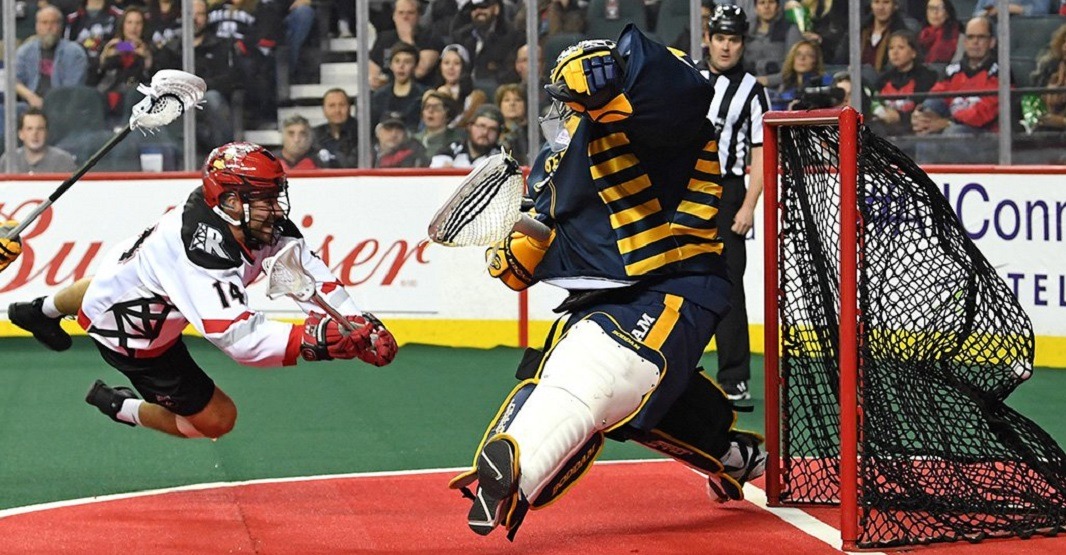 While many think of the Scotiabank Saddledome as home to the Calgary Flames, that’s not the only team in the barn.

The Saddledome is also home for the Calgary Roughnecks of the Natoinal Lacrosse League, who play their games on weekends.

With tons of goals, big hits, and fast-paced action throughout, there’s lots to love about lacrosse.

Here’s nine things to experience at a Roughnecks game.

1. Lots and lots of goals

One thing you can count on at a Roughnecks game (or any lacrosse game really) is lots of goals being scored.

In the 2017 season, the average game had just shy of 25 goals scored in it. The Roughnecks themselves averaged 11.7 goals-per-game, which gives the crowd plenty of opportunities to cheer during a 60-minute game.

Remember that time Dane Dobbie scored 7 goals in a game?

Because of how many goals are scored, a hot goaltender can mean the difference between a win and a loss.

It’s tough to track the ball when players have so many options on how and where they can shoot it. Being a lacrosse goalie is no easy task. You could argue it’s the toughest goalie position of any sport.

That’s something the two Roughnecks goalies, Frank Scigliano and Christian Del Bianco can both attest to.

In honour of Frank’s birthday, we thought we’d share this awesome save with y’all! #HBDFrank pic.twitter.com/ZtXU9UeyUA

For the last half decade, the top goal scorer for the Roughnecks has without a doubt been Curtis Dickson.

So if you go to two Roughnecks games, chances are Dickson will get a hat-trick in at least one of them.

When he can make plays like this, it’s no wonder he scores so much.

4. A memorable moment from Dane Dobbie

Dane Dobbie is in his 11th season with the Roughnecks, having been with the team since the 2008 season.

He stands as the Roughnecks all-time leader in goals with 335, and fifth in all-time games.

He’s learned a thing or two over his years in the league, and you’ll often see him making crafty plays like this one.

In a tight-checking game like lacrosse, you’ll often see players try some crafty moves while cradling the ball to gain separation from the defender and put themselves in a position to score.

Other times, guys can simply release absolute laser beams that the goalies don’t even see coming.

Snipe 🎯@Loewen10 finds the top corner for his first goal of the campaign! #WaybackWednesday pic.twitter.com/wrWva02dMl

One of the best aspects to lacrosse is the contact part of the sport, and you’ll see your share of big hits dished out at any given Roughnecks game.

They’re called the “Rough”necks for a reason.

The Scotiabank Saddledome is a big stadium and the Roughnecks do well to fill it most nights.

Much like at Flames games, you can see a sea of red throughout the stands as the Roughnecks fans dress up and cheer to support their team every game.

Come for the party, stay for the game.

There are both food and drink specials available from 5:30-7 before every home Roughnecks game, so you can get your party on before the action starts.

During breaks in the action you’ll see the Drill Crew come out. That’s the cheer squad for the Roughnecks, and they know how to get down.