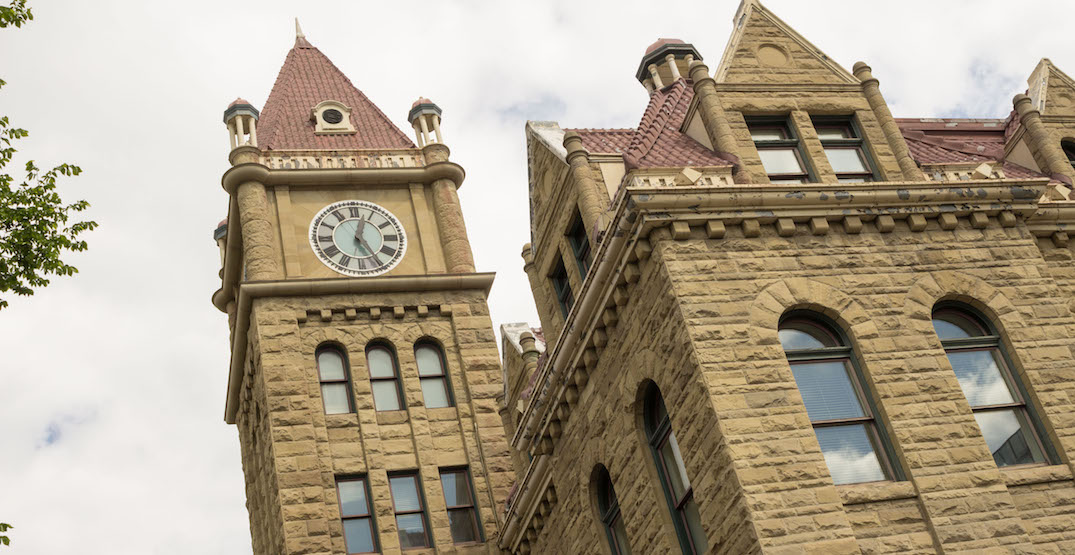 While Calgary is a fairly new city compared to some of Canada’s more eastern outposts, we still have a number of historic buildings that reflect our past.

Calgary was founded in 1875, while places like Halifax, Montreal, and St. John’s were established more than 200 years earlier. This is apparent by differences in the architectural style of Calgary’s heritage buildings compared to older cities.

After the Great Calgary Fire of 1886, many of our early structures were built or rebuilt using sandstone, which can still be seen today in buildings such as City Hall, Memorial Park Library, and the Fairmont Palliser Hotel.

There are a couple of buildings and structures across Calgary that were built in the late 1800s, and many from the early 1900s that are still in use today.

With a little help from Canada’s Historic Places, here are the churches, banks, hotels, and historic homes that make up 16 of the oldest buildings in Calgary.

This upper-class sandstone residence was designed in a High Victorian eclectic style, and Senator Sir James Lougheed and his wife resided in the home, entertaining guests such as the Prince of Wales. Today, Lougheed House is museum and restaurant, often hosting special events in the building and its surrounding gardens.

The AE Cross House is a two-storey building that borders the Bow River in the historic Inglewood neighbourhood. The house was built in 1891, and was acquired eight years later by Alfred Ernest Cross, a prominent Calgary entrepreneur and politician. Nowadays, the building is home to popular restaurant Rouge.

St. Mary’s Parish Hall is known for both the early history of the Roman Catholic Church in southern Alberta and for its reuse as a Canadian Northern Railway station. St. Mary’s is located in Rouleauville, a French community in the heart of the city, and now hosts the Alberta Ballet Company’s studios.

In the early 1900s, the National Hotel was close to the Canadian Pacific Railway station, the brewery, and the livery, and it served as both a district tavern and a hotel for transient workers. Today, Calgarians and visitors alike can grab drinks or a bite to eat at The Nash – an upscale restaurant and lounge on the main floor of the old hotel.

The Grain Exchange was a skyscraper when it was first constructed in Calgary’s early days, however the city has since grown around it, and it’s become one of the lower buildings in the downtown core. The building now acts as a hub for a number of retail businesses, private companies, and not-for-profit organizations.

After nearly a century, the King Edward Hotel was Calgary’s second oldest hotel and the longest operating bar when it closed in 2004. In 2008, the King Eddy was acquired by the National Music Centre and was carefully reassembled, reopening in 2018 as a restaurant, bar, and music venue.

Built in order to keep up with growing municipal services, City Hall originally housed Calgary’s mayor and aldermen, government offices, the police department, law courts, and the municipal telephone system. City Hall was temporarily closed in 2016 to undergo an extensive restoration, and reopened in 2020. 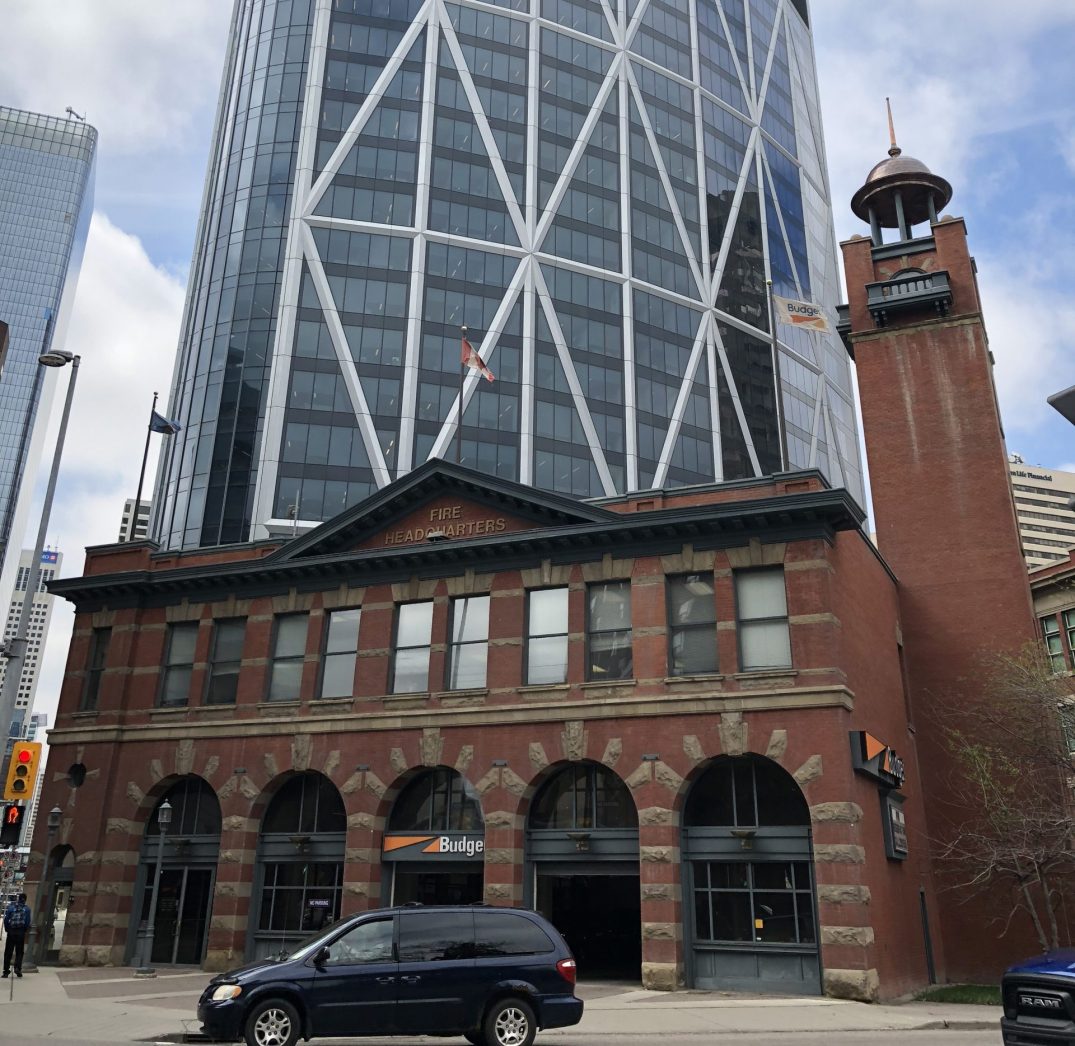 Calgary Fire Hall No. 1 represented advances in fire-fighting that were characteristic of the pre-war boom in Alberta. The fire hall is also known for its connection to James “Cappy” Smart, one of the city’s most prominent fire chiefs. The building was repurposed as a Budget Car Rental in 1989, but has stood empty since September 2019, ready for its next purpose.

The YWCA was originally established to address the housing needs of single women new to the city, and this location was the first one built in Alberta. The building has been used for many social and cultural functions over the years (including a current events club operated by Nellie McClung). It now serves as the Old “Y” Centre for Community Organizations.

Memorial Park Library was the first public library in the province, and it’s still in operation today. The building is located on carefully-landscaped Central Memorial Park in Calgary’s Beltline community.

The Fairmont Palliser was built as the Canadian Pacific Railway grew westward, and the hotel was meant to host the influx of tourists coming into the city by train. Today, visitors can stay in the luxurious property for a Victorian-era experience in downtown Calgary.

Calgary Courthouse No. 2 is associated with the development of the province’s judicial system. It is the largest surviving courthouse from the first decade of Alberta’s existence as a province, and was used as the Calgary seat of the Supreme Court of Alberta.

The Palace Theatre is an extremely rare example of the extravagant style of silent movie theatres known as “movie palaces”, and it was also the site of pioneering radio broadcasts in the city.

In 2007, the venue turned into hockey hub and sports bar Flames Central, in a partnership between the Calgary Flames and Concorde Entertainment Group. The group changed the name back to the Palace Theatre in 2017, and the entertainment venue remains home to everything from concerts and performances to seminars and corporate events.

This Bank of Nova Scotia location operated as a bank in Calgary until 1976, and was designated a Provincial Historic Resource in 1981. Since then, the building has been home to a wide array of restaurants, clubs, and bars. 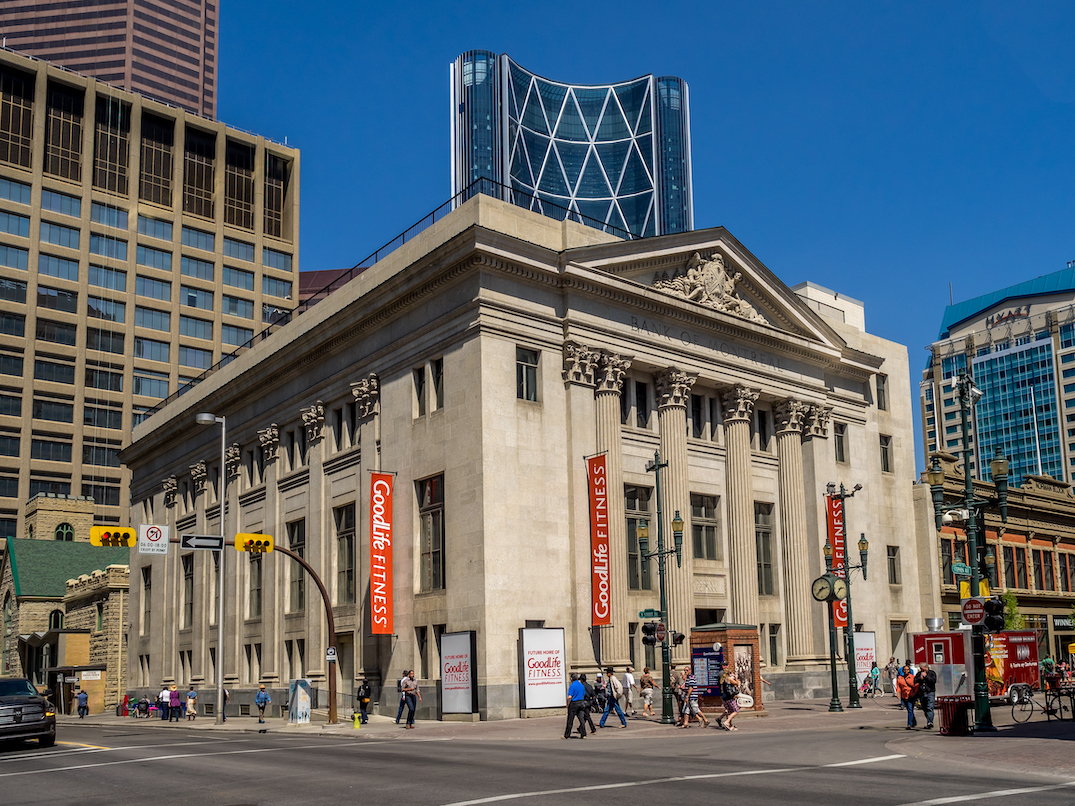 The Bank of Montreal was one of the first financial institutions to establish itself in Calgary, likely due to the westward expansion of the Canadian Pacific Railway, as it was the CPR’s principal bank. Today, the building operates as a Goodlife Fitness centre on the city’s historic Stephen Avenue.