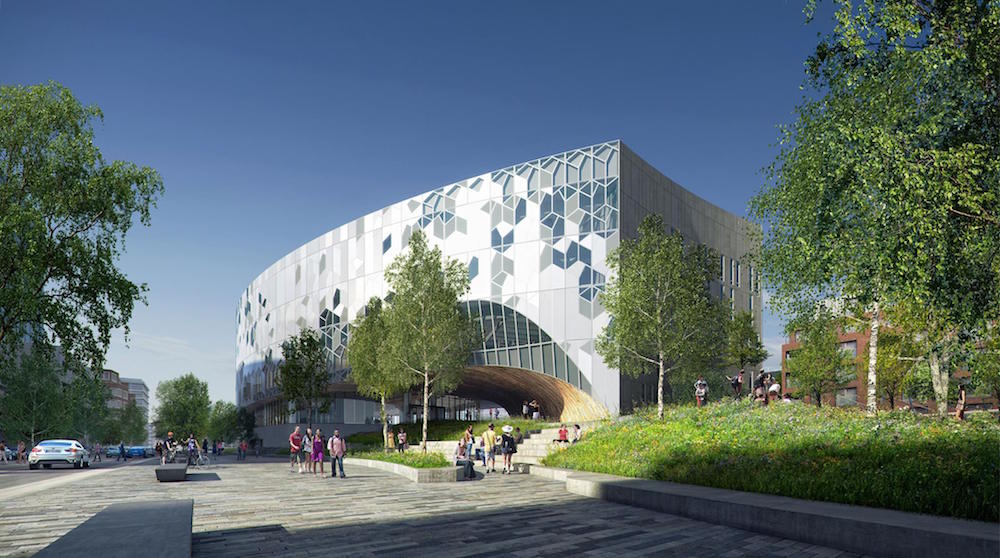 13 years in the making, planning for a new library in Calgary’s downtown began in 2004.

In 2013 February, Calgary city council approved the site in East Village along with a $245 million budget, and assigned Calgary Municipal Land Corporation (CMLC) as the developer.

Construction of the LRT encapsulation started 2014 September, was completed in 2015 September, immediately followed by construction on the main building.

The 5-level library is slated to open late 2018. A city audit will be conducted in July to September 2017 to assess the operational readiness of the facility.

Landscaping is the next project underway for the Calgary Central Library, with a timeline running from June 2017 to July 2018.

Fixtures, furniture & equipment will be on the docket in April 2018.

View of @eastvillageyyc high atop the New Central Library. We just posted a project update video with the architect to our website – link in bio. #nclinev

Here’s a sneak peek at the exposed concrete ceiling inside #NCLinEV. This photo was taken in what will eventually become the children’s area of the library.

The creation of a large curved beam is underway – the formwork is in place and reinforcing steel is being installed. #NCLinEV

This bird’s-eye view of the #NCLinEV site was captured just a few weeks ago on November 24. The roof is finished on the administration building, and the cooling towers have been installed on the roof. The curtain wall is also progressing nicely along the west side (facing City Hall).

Installation of the precast concrete wall panels has begun on the north-east corner of the building! These panels vary in shape and size, but are approximately 1.5 metres wide by 9 metres high, and weigh approximately 5,000 kilograms. #NCLinEV

Here’s a recent shot of #NCLinEV from 8th Ave SE looking west. Eventually you’ll be able to walk right through the underbelly to 3rd St SE and see City Hall just across the road.

Thanks for the amazing capture @nicholasdykstra ・・・ A view of the New Central Library’s curtain wall (designed by #Snohetta & #Dialog) from the inside. #yycarchitecture.

Thank you to all who signed the last steel beam of the building! We are so thrilled that Calgarians came to create a time capsule with us. The completion of the the skeletal steel structure marks the next stage of construction – interior finishing. #NCLinEV

You can really see the progress that’s been made to enclose the building in this photo from March 23, 2017. More of the geometric glass curtain wall has been installed, and most of the glazing around the 1st story is in place on the east side. #NCLinEV

It’s one milestone after another for #NCLinEV! Today we have our largest ever concrete pour in the project – over 2.8 million pounds – and on Sunday we’ll hoist the last steel beam, which over 700 Calgarians have signed.

Here is one of the soffit panels in fabrication. This beautiful wood will form an arched ceiling outside the building’s entrance. We’ll start to see some panels installed next week on the west side. #NCLinEV