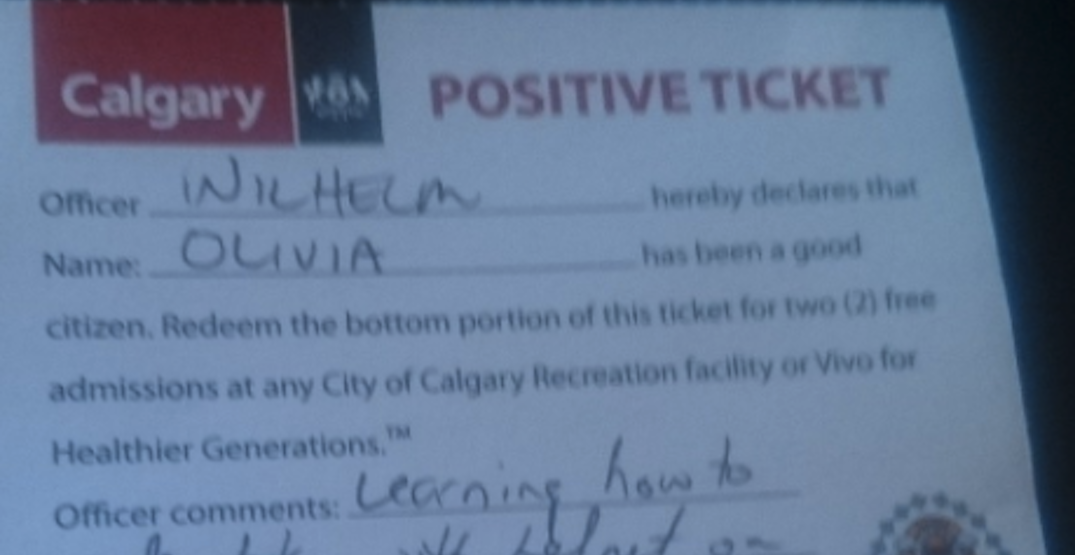 A ticket written by a Calgary Police officer (angie_thiessen/Twitter)

Angie Thiessen was taking her kids out for a bike ride on a sunny spring day when a police officer pulled over to speak with her.

Her children had their helmets on, but the officer still pulled out pen and paper to write a ticket — not for Thiessen herself, but for her daughter, Olivia.

Fortunately, Olivia will not have to go down to the traffic courts to dispute her ticket, or pay a hefty fine, but will instead be heading to a City of Calgary recreation facility with two free admissions.

The officer, as seen in a tweet posted by Thiessen on Wednesday, had actually written up a positive ticket, commending Olivia for wearing a helmet while riding her bike.

“Officer Wilhelm hereby declares that Olivia has been a good citizen,” the ticket states.

“Redeem the bottom portion of this ticket for two (2) free admissions at any City of Calgary Recreation Facility or Vivo for Healthier Generations. Thank you for helping make Calgary a wonderful community.”

Thiessen was evidently a fan of the ticket, stating in the tweet “When the @CalgaryPolice pull over and write a ticket while you’re taking the kids for a bike ride. Such a great idea — Liv was thrilled! And it had all the neighbours calling… #yyc”

When the @CalgaryPolice pull over and write a ticket while you’re taking the kids for a bike ride. 😁 Such a great idea – Liv was thrilled! And it had the neighbours calling… #yyc pic.twitter.com/ECQSIRl2yf

The positive ticket campaign was started in 2016, and in January the program partnered with Mac’s convenience stores to offer youth some positive reinforcement for doing things like wearing their helmets, helping out younger students, or attending all their classes for the whole week.

According to a January release from the Calgary Police Service, approximately 2,350 positive tickets had been given out to Calgary’s youth for positive behaviour.

“This is a great opportunity for officers to recognize positive behaviour and build relationships with youth in our community, which is the cornerstone of community policing,” said Calgary Police Service Sergeant Andrew Critchley, in the release.

Similar positive ticket campaigns have been used in other areas of Canada, including Toronto, Vancouver, and New Brunswick.