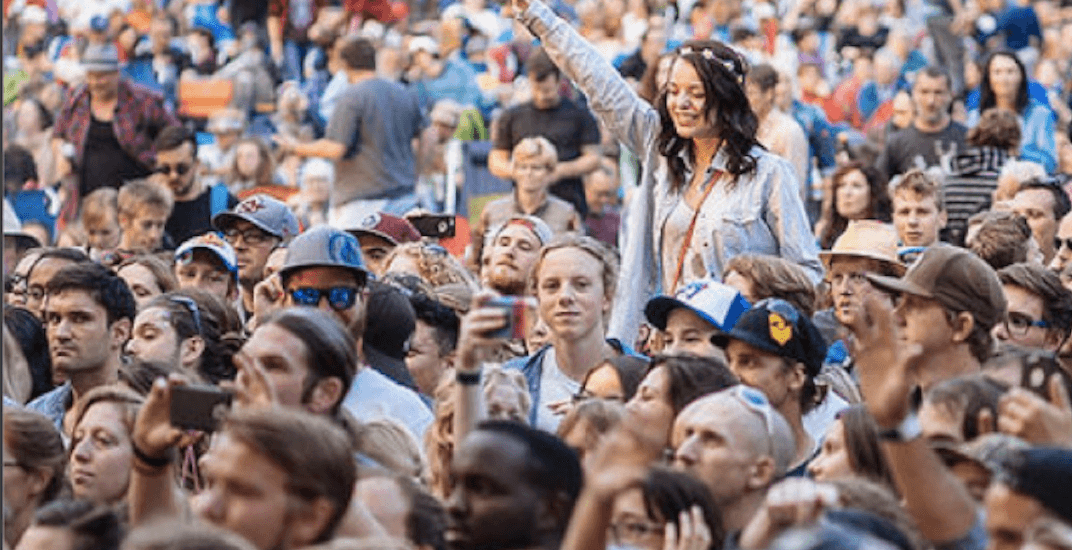 The Calgary Folk Music Festival is back this weekend and for its 38th anniversary, the Fest bringing some incredible acts to the city.

The event is expected to draw more than 12,000 attendees each day and organizers have created a handy app to help fans navigate their way around the park. By downloading the Calgary Folk Music Festival app, you can find out when your favourite acts are performing, listen to songs from CFMF artists, and even purchase beer tickets in advance.

From Coeur de pirate to Holy F*ck, here are 13 acts to check out at this year’s Calgary Folk Fest.

Coeur de pirate’s style varies from ’60s-style French pop to North American folk, bouncing effortlessly back and forth across the Atlantic between time and genre. And although she sings in French, no knowledge of the language is necessary to catch the foibles, frustrations, self-recriminations and inside jokes of the journey from love to heartbreak and back again (although it helps).

A shapeshifter, a cross-genre musicologist who makes nu-soul, not neo-soul. From sparse plaintive vocals to loud foot-stomping blues, listening to Son Little is like taking a journey through the past, present and future of R&B at once. Aaron Livingston emerged on the music scene over a decade ago, providing guest vocals for Philadelphia area hip hop acts, notably the Roots (“Guns Are Drawn” from The Tipping Point), before joining Icebird and then releasing music under his stage name, Son Little.

Before he was one-half of The Civil Wars, John Paul White was a singer-songwriter, though not the tempered-in-the-fire singer-songwriter he is today. After earning a quick burst of fame and a trophy case full of awards, the aptly named Civil Wars infamously imploded in 2013 and a different version of White emerged — one that’s seen what the bright lights can do if an artist isn’t able to protect himself from the glare. The demise of his band left White alone at the microphone, with no onstage partner except that trusty guitar.

City and Colour, the solo project and pseudo-namesake of songwriter Dallas Green, built a devoted following on the strength of Green’s emotive falsetto soaring over stripped down folk-rock and acoustic ballads. Things will be a bit different for his third Folk Fest appearance, though. Instead of the more intimate arrangements of his first few albums, Green will be bringing the revamped sound showcased on 2015’s If I Should Go Before You, a record that largely eschews the acoustic guitar for louder electric sounds, pop melodies with touches of R&B, and even psychedelic guitar.

There’s an irreplaceable kind of satisfaction that comes with unplugging from our data-saturated and mentally scattered world for a moment, getting away from online tweeting to listen to the simple song of a bird. To hear those sounds on a still clear morning is to start the day off right. Birds of Chicago may not be literal birds (though they are literally from Chicago) but they do capture that fine feathered feeling. The band’s combination of intricacy and purity cuts through the stresses of modern life to deliver a direct hit of emotional uplift, speaking to the buried feelings of innocence and bittersweet melancholy that lurks inside all of us.

Holy F*ck makes you dance with rock’n’roll intensity, vibrating your body into rhythm through pure volume and tone. Nothing about Holy F*ck feels remotely produced or computer generated. Every synth tone is organic and analog, some of the sounds are even made with toy phasers or other non-instruments. The foundations of their songs are built up live: looped melodies, distorted guitar, modulated vocals, exploding in massive crescendos, punctuated by momentous musicianship and a circadian rhythm section, leading to moments of furious improvisation.

As kids, the Alvin brothers—Dave and Phil—loved the blues, and would travel to the big smoke to see blues legends Junior Wells, Buddy Guy, and T-Bone Walker. That love of the blues inspired them, and they became the backbone of the legendary roots-rockabilly-R&B band the Blasters, a group that, along with Slash Records label mates X and Los Lobos, shook the LA punk scene in the early ‘80s. Phil’s raspy, blues-shouting lead vocals went perfectly with the retro rockers penned by brother Dave who also twanged it up on lead guitar.

To hear Mbongwana Star is to touch a little piece of the city of Kinshasa, a city whose sense of cultural ferment and cosmopolitanism has been compared to New York in the ‘80s. It was once one of Africa’s great musical epicentres, and its influential rumba and soukous scenes created a galaxy of dance-music demigods. Unfortunately, hard times of war and unrest brought that golden age to an end. Citizens of the immense shanty-village metropolis had to fall back on “Système D”: slang for using your wits and courage to hack out a living at the coalface of poverty.

Mbongwana Star, whose stripped-down combination of beats, samples, guitar and vocals arrest a listener’s attention from the first bar. Theirs is the sound of a burgeoning creative revolution that may not be televised, but will certainly be heard.

Inuk throat singing isn’t an easy sell to the masses living south of the 60th parallel, but Tanya Tagaq has brought it to a wide audience

While Tagaq’s technique certainly is rooted in Inuit tradition, her approach is thoroughly modern and more than a little bit punk rock — the music is unsparingly confrontational in both tone and content. Retribution – the follow-up release to her 2014 Polaris-winning album Animism – is more musically aggressive, political, challenging and spine tingling. It’s not dinner party ambience music; rather an honest, a complex, exhilarating, howling protest and portrait of a violent world in crisis.

After over 30 years together, a Canadian Music Hall of Fame induction, and more than a few songs that have reached anthemic status, how can any band remain as consistently vibrant and relevant as Blue Rodeo? The magic is in the relationship between co-leaders Greg Keelor and Jim Cuddy—the way the two men sing together, interact on stage, and generously lift each other’s songs represents the rarest of musical partnerships. Blue Rodeo’s popularity has never been defined by generation or genre—technically they fall into the realm of country-rock, with guitar-based songs punctuated by flourishes of keys and pedal steel, but whether it’s Cuddy crooning a ballad or Keelor delving into psychedelic rock, every Blue Rodeo number is built around a core of classic singer – songwriting.

Foy Vance was born in Bangor, Northern Ireland, the son of a travelling church minister who, soon after his son’s birth, uprooted the family for a few years to share the faith with congregations in poor churches in America’s south. His music has been used in a variety of soundtracks, including Grey’s Anatomy, and he’s worked with Ed Sheeran a few times, culminating in being signed to Sheeran’s Gingerbread Man label for his third studio album The Wild Swan in 2016. Vance’s musical gifts continue to gain him greater recognition. Perhaps his greatest gift lies in his songwriter’s ability to see the complexities of identity and belonging underneath the national borders, and into the thoughts and frustrations of blue-collar workers, regardless of origin.

Yola Carter’s gift for soulful Americana was first seen on North American shores at Nashville’s Americana Festival last September, from which you might deduce that she’s a musical rookie. You’d be dead wrong. The 33-year-old British singer grew up playing fiddle in a small seaside town in the southwest corner of the U.K., and her childhood was filled with personal and cultural isolation that was relieved mainly by her love of Americana and country music. Autobiographical Appalachian tales and offerings like the O Brother, Where Art Thou soundtrack and the Byrd’s Sweetheart of the Rodeo were Carter’s gateways into old-time music and longhaired country-rock.

Mohsin Zaman is the personification of a hug. This Dubai-raised, Edmonton-dwelling singer songwriter radiates an unparalleled warmth and energy; large and friendly, he has a stage persona you can expect your grandmother to fall in love with. With his big smile and ten gallons of hair, you would expect a singer like Zaman to have a few Michael Franti-esque pop anthems in his pocket, but his music wears a darker cloak. His misty folk songs recount a generous and empathetic perspective, intercut with moments of vociferous self-critique.