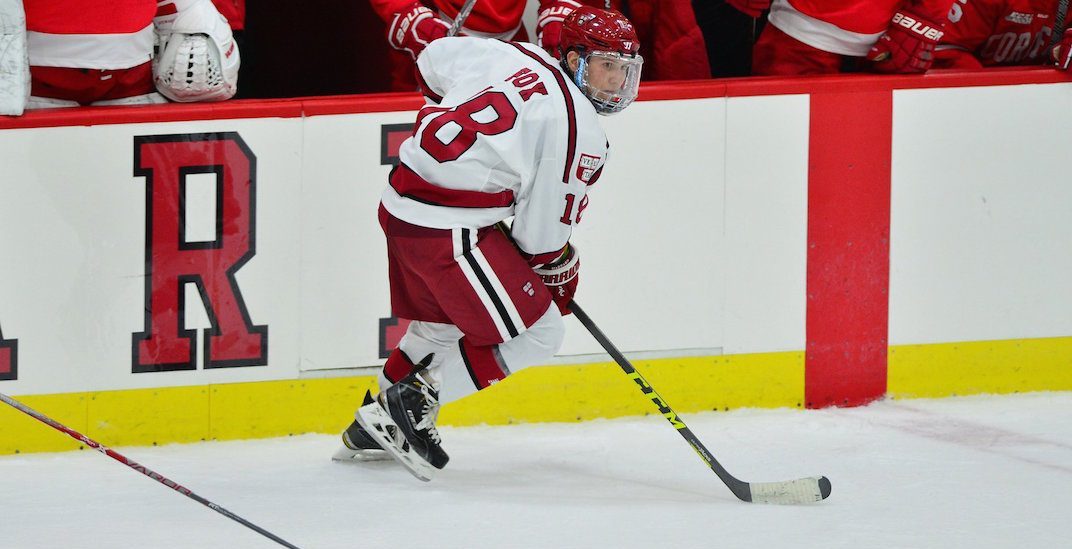 It takes a special kind of player to turn heads as a freshman in NCAA Division I hockey, but that’s exactly the buzz surrounding Calgary Flames prospect Adam Fox.

When Calgary selected the diminutive defender with their third-round pick in 2016, not much was expected out of the gates for the American.

Scoring 59 points in 64 games with the US National U18 Team, Fox definitely had the offensive side of his game up to snuff, but standing at only five-foot-ten and 185 pounds made him one of the smaller blueliners on the squad.

The real test came this past season for Fox, as he began his college hockey career with the Harvard Crimson while trying to climb the Flames’ prospect depth chart.

And what a year it’s has been for the Jericho, New York product.

Any first-year jitters were quickly erased at Harvard, as Fox was one of the top rookies on not just his team, but in all of NCAA hockey.

Congrats to Adam Fox, the #ECACHockey Rookie of the Year! pic.twitter.com/Vnqwg4Mh0m

Through 35 games with the Crimson, Fox amassed an impressive six goals and 40 points and helped Harvard to reach the Frozen Four tournament, where they lost to Minnesota-Duluth in the semi-finals.

Sandwiched in the middle of that campaign was a stint with Team USA at the World Juniors in Montreal and Toronto, playing mostly on the team’s second and third pairings.

Adam Fox has won a World Junior gold, a Beanpot and a ECAC title this year. Two wins away from an NCAA title as well. #Flames

Despite this, Fox was able to post four assists in seven games and walked away with a gold medal alongside fellow Flames prospect Tyler Parsons.

It was the first time many Flames fans got to see Fox’s smooth skating and on-ice vision, which have been a big reason for his success over the last 12 months.

Fox’s climb up the prospect rankings continued this summer, dressing for Team USA at the recent World Junior Summer Showcase in Plymouth, Michigan.

Dressing for five games over the tournament, Fox torched the competition for three goals and nine points.

That included a five point effort against Team Canada in a 7-5 win and was crowned the leading scorer not only for defencemen, but for all players at the tourney.

Heading into the 2017-18 college season, expectations have skyrocketed for the 19-year-old rearguard with plenty of opportunities to shine this winter.

Harvard is expected to field another competitive squad with Fox in a first pairing role, while he’s also pegged to be a key piece for USA’s 2018 World Junior team in his home state this winter.

With the Flames drafting Juuso Valimaki in the first round this year, Calgary currently has a stable of quality defencemen all fighting for limited ice time.

Along with Fox and Valimaki, the Flames also have Rasmus Andersson, Oliver Kylington, and Brett Kulak looking to crack the team full-time over the next few years.

While Fox is still probably another two years off at least, there is an argument to be made that he currently is the most promising talent that Calgary has.

Andersson, Kulak, and Kylington had solid seasons with the AHL’s Stockton Heat, but none torched their competition like Fox did last year.

Valimaki is the one wild card as he is eight months younger than Fox and is on a similar development path, but at this point I would still give the edge to American.

If there was one area to Fox’s game that still needs some work, it would be on the defensive side of the puck.

Like many young defenders who put up staggering points, the two-way aspect can get lost as they focus on point production and generating offence.

If Fox can shore up his play over his sophomore season with Harvard, it would go a long way to solidifying a spot on Calgary’s roster down the road.

This will be a very interesting season for Fox, as now he has some big expectations on his shoulders following a year where was able to fly under the radar.

More minutes with Harvard and Team USA will test his ability to play in high-pressure situations, but will also give him a chance to shine against top talent both in the NCAA and on the world stage.

While he’s still a big of a project player with NHL aspirations a few years out, there might not be a Flames prospect with a higher ceiling than Fox.

The NHL today suits players with speed, vision, creativity and skill, all aspects that point to Fox being the next cornerstone defenceman for the Flames.