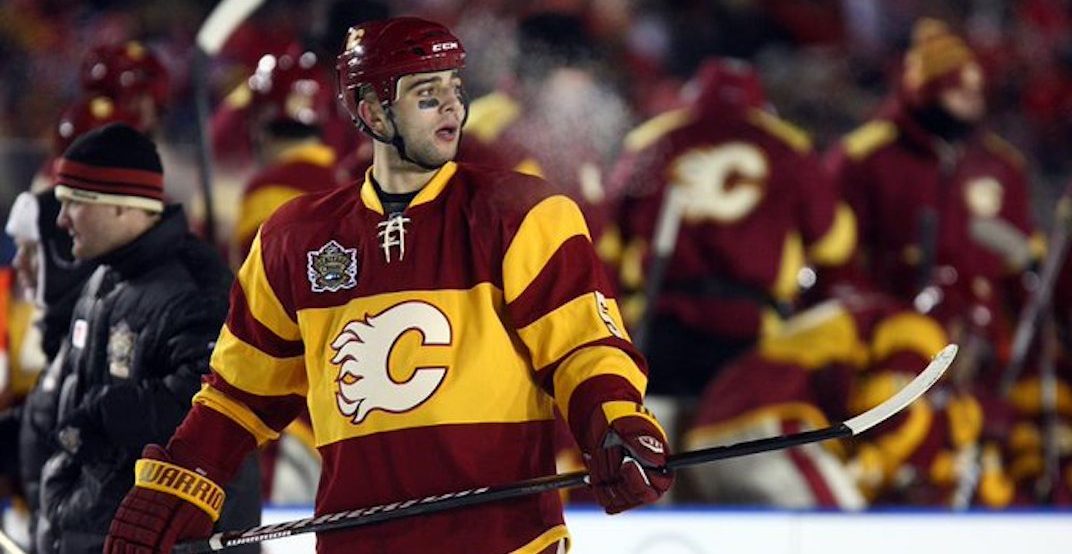 For most players on the Calgary Flames, Saturday’s game against the Winnipeg Jets will be an absolutely foreign experience at the NHL level.

Set to take to the ice at Mosaic Stadium in Regina, the Flames will be playing just the second game in franchise history in the great outdoors for the 2019 Heritage Classic.

Core players like Johnny Gaudreau, Sean Monahan, and Matthew Tkachuk will be making their outdoor debuts and will be looking to uphold some history.

On February 20, 2011, the Flames and Montreal Canadiens met in just the second outdoor NHL game to ever be played in Canada.

The 2011 Heritage Classic at McMahon Stadium in Calgary was a bone-chilling affair with the Flames earning a 4-0 shutout victory over the Habs thanks to a memorable 39-save performance by Miikka Kiprusoff.

Kipper was on another level in the 2011 Heritage Classic, making 39 saves in the 4-0 win over the Habs in front of 41,022 fans!#FlashbackFriday | #HeritageClassic pic.twitter.com/I6gj4aLpHX

Although it seems like eons ago, the Flames can lean on two familiar faces for guidance in the outdoor conditions.

Veterans Mark Giordano and Mikael Backlund were both on Calgary’s 2010-11 roster and got the chance to each face off against the Canadiens under the McMahon Stadium lights.

Ahead of Saturday’s highly anticipated game between the Flames and Jets in Saskatchewan, let’s jump back in time to the NHL’s second-ever Heritage Classic almost nine years ago.

Hopes of a balmy Heritage Classic in 2011 never came to fruition, as the Flames and Canadiens stepped onto the McMahon Stadium ice for the first time in sub-zero conditions.

An arctic front plunged Calgary into temperatures to around -20 degrees Celsius, however it was a more endurable -6 degrees as players hit the ice for warmups.

“The jets flying over after the anthem, being a great atmosphere, the fans standing up dancing and stuff like that,” said Backlund. “Just warming up too was pretty cool, it was almost a full house already.”

Just over 41,000 fans were able to cram into the expanded seating at McMahon Stadium to get a glimpse of Canada’s first outdoor NHL game in eight years.

For Backlund, it was those moments during the warmup that he remembers the most as it was his only chance to really take in the scenery.

“When the puck drops it’s a little more focus on the game,” he said. “It’s all dialled in, I mean between whistles you can maybe look around a little bit and take some in. But, definitely in warmup is a chance to take as much in as you can.”

Following a ceremonial face-off with Hockey Hall of Fame inductees Lanny McDonald and Bob Gainey, the Flames and Canadiens were ready to get the game underway.

The first 10 minutes featured both sides trying to adapt to the ice conditions, which saw many of the players struggle to hand the puck on the rush.

A setting sun and spectator seating set back from the ice also proved to be challenges for the players to overcome.

“I think your depth perception is different because the stands are further away,” said Giordano. “You got to adjust to little things like glare on the ice and stuff like that.”

Calgary dominated the early going with a flurry of shots and were able to take a 1-0 lead eight minutes into the game with Montreal’s P.K. Subban and Hal Gill in the penalty box.

On the ensuing 5-on-3 power play, Alex Tanguay slid a pass to Rene Bourque parked next to Carey Price in the crease and tapped home the game’s opening goal.

Rene Bourque got things started for the #Flames back in 2011 🙌#FlashbackFriday | #HeritageClassic pic.twitter.com/V4TDC08PYr

With the sun now gone and temperatures plummeting to -21 degrees with the wind chill, ice crews quickly decided that using a Zamboni would damage the playing surface.

That forced crews to use a high-pressured hose and shovels to resurface the ice during the first intermission, something that would become a key memory from the 2011 outdoor contest.

Players on the Flames and Canadiens benches were kept as warm as possible as the second period began, but unfortunately that didn’t extend to Kiprusoff between the pipes.

“My toes weren’t frozen because we had heaters on the bench,” said Backlund. “We just put our feet into… there’s holes in the bench where you can put the heels in and heat them up. But, I remember Kipper didn’t like it as much because he was out there being cold the whole time.”

Luckily for Kiprusoff, he was able to keep warm with a flurry of Canadiens shots coming his way in the second period, making 21 saves in the middle frame alone.

Calgary was able to turn that defence into offence, as Curtis Glencross picked up the puck shorthanded in the Montreal zone and set it on a platter for an Anton Babchuk one-timer with 7:16 left.

BOOM! BABCHUK! The blueliner scored a shorty vs. the Habs in 2011 😍#FlashbackFriday | #HeritageClassic pic.twitter.com/7fHvIHBD9S

Two minutes later it was Bourque scoring his second of the night, pulling the puck to backhand before going airborne for his 100th career goal and a 3-0 Flames lead after 40 minutes.

BORK BORK BORK! 1⃣7⃣ picked up his second goal the night in the second period at McMahon Stadium!#FlashbackFriday | #HeritageClassic pic.twitter.com/lBYg17wpfU

As the third period crawled along, the wind became more of a factor at McMahon Stadium and dropped the temperature even more.

But as Giordano recalled, both the players and the fans were in it for the long haul.

“Last time it was really cold and I remember the warmest spot was on the bench, where you don’t want to be,” he said. “I remember the worst part was for the families sitting in the stands, the wind was pretty tough.”

Calgary finally put the game out of reach with 9:07 remaining in regulation, with Jarome Iginla sliding a cross-crease tap in to Tanguay on the man advantage to send the freezing fans home happy.

Kiprusoff became the first goaltender in NHL history to record a shutout in an outdoor game, taking home the night’s first star honours as well.

Calgary and Winnipeg will have quite the act to follow on Saturday night, with the Jets hungry after being shut out 3-0 by Edmonton in their first Winter Classic Game in 2016.

Giordano said that February night in Calgary is one he’ll never forget and is hoping his younger teammates will have those same memories after this weekend’s festivities.

“It’s a pretty cool atmosphere out there,” he said. “To get outside and get your family there, it’s sort of a cool feeling. I’m sure a lot of guys… it will be their first time, so they’ll enjoy it.”