There’s two kinds of lottery talk going on right now when it comes to the Calgary Flames.

Some fans are taking to social media to show off their just-bought tickets for the Flames Foundation lottery, hoping a big win is coming their way.

But many more are discussing the NHL lottery and whether the Flames should continue losing, to improve their odds, or stay the course.

Go for the playoffs or go full tank job? They’re eight points out of a playoff spot, but they’re only two points out of the coveted last-place position. 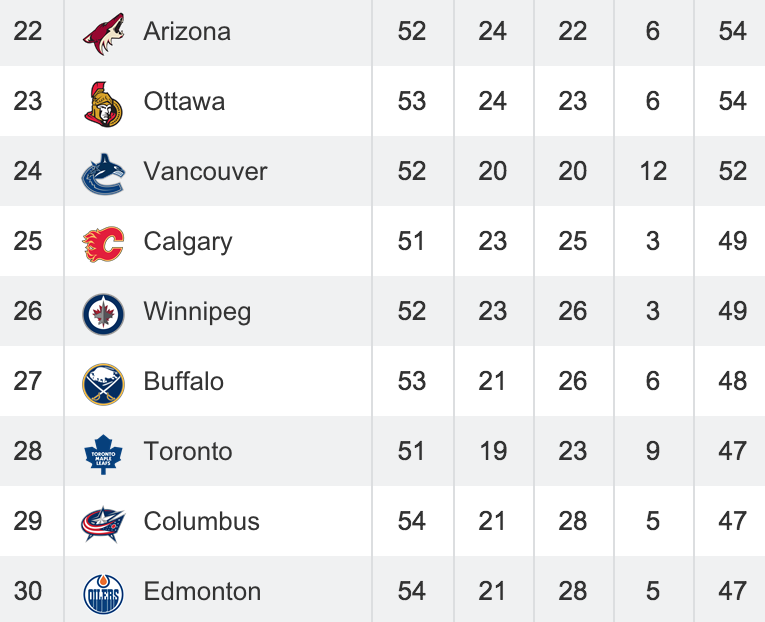 Is it wrong that I'm upset the Flames won last night? #lottery pick. They will not make the playoffs anyway. Might as well get a good pick.

Usually Flames and Canucks fans can only agree that they hate each other but right now the most practical of the faithful in each city agree their teams should lose in the hopes of grabbing the #1 pick and Auston Matthews. Trying to win right now when the playoffs seem unlikely is not smart.

Looking at the Flames’ remaining 31 games it’s likely the losing will come naturally: four games against Los Angeles, three with Anaheim, two with San Jose. Eight of their final 11 games are on the road, which will make making the playoffs difficult even if they are in the playoff race.

But will the Flames lose enough?

9 pts out, do you claw your way into the playoffs or tank like the oil and Sabres for the lottery? #Flames

If they don’t get hot over the next couple of weeks Flames brass is going to have to help things along. Dump as many veteran bodies overboard as you can. Trade Jiri Hudler, Kris Russell, David Jones, either goalie Jonas Hiller or Karri Ramo, and anyone else they can pawn off on another team and call up youngsters from the farm to help expedite losses.

The Flames are going to have to get better at losing, though, because judging by the Canucks’ play Saturday night they’ve already started the process of tanking.

It’s bad enough for Flames fans having to watch the Edmonton Oilers win Connor McDavid and listen to the national media fawn all over him on a daily basis for the next 10 years, imagine if the Canucks get Matthews. They will start getting it from the West Coast too.

Wouldn’t that be enough to convince Flames fans that losing right now is in their best interest?