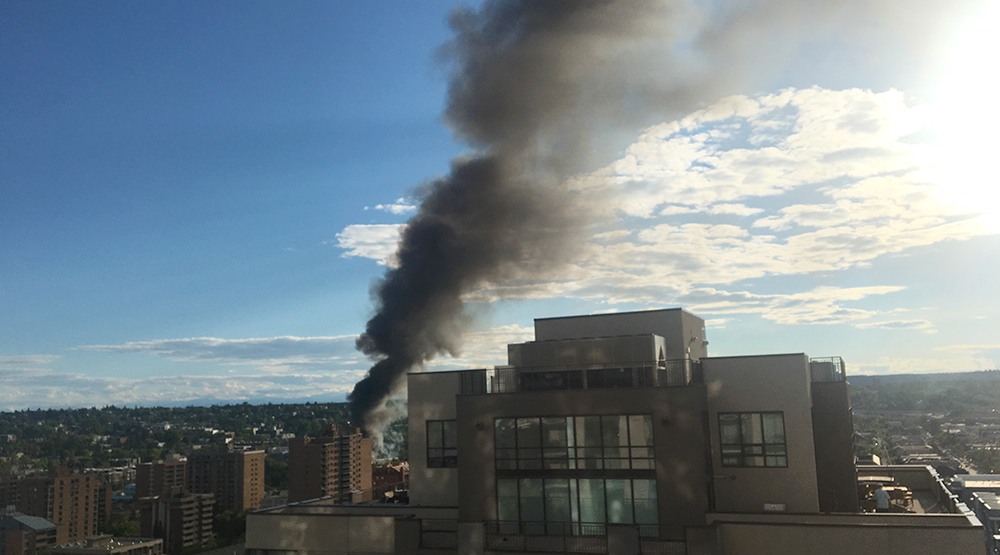 The Calgary Fire Department was called to a fire at a multi story residential construction site at 16th Avenue and 16th Street SW on June 5 around 7:35pm.

Bystanders told the fire department that the flames were reaching 100 feet in the air and indicated that the fire was threatening apartment buildings next door.

The fire was brought under control just after 9 pm and fire crews continued to put out hot spots throughout the night.

The source building was completely destroyed by the fire and the neighbouring apartment buildings containing approximately a dozen units each, sustained significant damage. Residents of the adjacent affected buildings were displaced and will remain without access to their homes until repairs can be made.

If anybody was in the area and has any information, photos or video of the fire especially prior to CFD arrival on scene, please email [email protected]

A large fire has broken out in the city’s southwest, causing a plume of smoke that’s visible from around the city.

Reports are coming in saying the fire is around 17th Avenue SW and 14th Street, in the Sunalta neighbourhood.

Fire crews are currently on scene battling the blaze.

Calgarians are taking to social media right now with pictures and videos.

That does not look good, if someone is making dinner, it’s probably going to be a takeout night. #yyc #Calgary pic.twitter.com/2MhGbSaM18

Hey #YYC, what is this fire close to #Crowchild? It is just to the North of me. I am at Flanders Ave. pic.twitter.com/shdxP1ro1r