The Calgary cycle track program has seen a 95% increase in riders across the city, according to a recent City of Calgary blog post and report.

The report – which is being presented before Calgary City Council on Friday, December 11 – breaks down data gathered from “count points” around the city, to assess the success of the cycle track pilot program. The program tracked 388,000 bike trips in Calgary between June 18 and November 15, finding that – among other things – the city saw a 95% increase in bike traffic along the network, including a 27% increase in female riders. 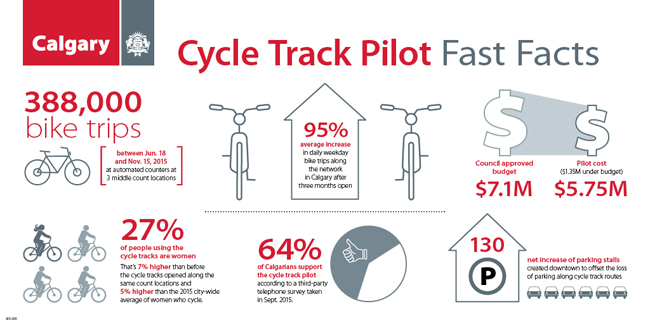 According to the pilot’s planners, the entire goal of the program is to offer Calgarians more options in how they get around the city.

“We’ve heard from Calgarians that there was barriers to biking in our downtown,” Katherine Glowacz,  Active Transportation Planner with the City of Calgary, told Calgary Buzz. “I think that by providing more choices for people, and more of that connectivity within the network for people.”

Glowacz adds that during the program they noted an increase in bike traffic on roads shared with cars, up to an average of 7.6%. However, on certain routes such as 8th Avenue, west of 3rd Street, during the peak hour the percentage of bikes on the road is as high as 46%.

“People[…] are giving it a try over the course of the pilot,” says Glowacz. “[They’re] seeing if they can bike to different destination in downtown, or bike the their workplaces.”

To learn more about the cycle track pilot program, visit the City of Calgary website.