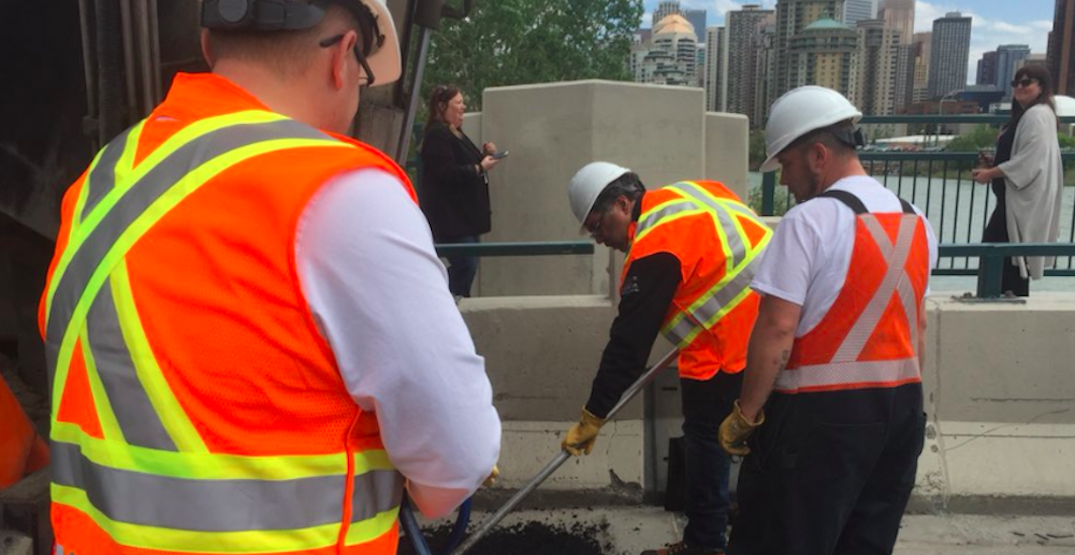 Calgary road crews have been out in force since early April in an effort to repair an estimated 5,000 reported potholes in the city.

And on Tuesday, Mayor Naheed Nenshi visited some of those workers on the front lines, saying he is pleased by their progress.

“I am happy to say our crews are making great progress in getting them filled,” he said.

Approximately 3,500 potholes have been repaired this year to date.

The city said the number of reports it received this year is “slightly higher” than in previous years.

And even though potholes appear in the city every spring, Nenshi said this year’s “harsh winter” made the pothole problem “particularly” difficult.

“As crews were not able to fix potholes throughout the winter this year due to extreme cold temperatures, they have been playing catch-up to get the work done,” said Nenshi. “They are making great progress but we still have some work to do.”

He noted that crews are averaging about 700 pothole repairs per week.

Mayor Nenshi finishes filling a pothole by driving the roller.
(I might as well just fire myself now.) pic.twitter.com/jyXsDuzuub

The city said crews address potholes on a priority basis with major roads being completed first. To identify pavement in need of repair, inspections of major roads are done twice a month and collector roads once a month. In residential areas, however, officials rely on citizens to report concerns.

Residents and motorists are encouraged to help “ensure that potholes are identified and repaired” by reporting them by calling 311 or using the road repair form on the 311-online system.

“We appreciate the patience and understanding from Calgarians as our crews continue to work hard to improve the roads for them,” said Nenshi.

The City has budgeted $6.2 million this year for minor asphalt repairs which include potholes.

Calgary isn’t the only major Canadian city that has suffered from increased pothole problems this year.

True 5,000 potholes might seem like a lot, but it pales to the number that were identified and replaced in Toronto.

As of March, that city had already seen 110,595 pothole repairs since January 1, marking the highest amount in the last five years. The previous record was 87,188 potholes patched during the same time period in 2014.

And in Montreal, one resident demonstrated just how big one particular pothole was by emptying an entire bag of Froot Loops into it to make a point.

All of a sudden our roads don’t look so bad now, right?