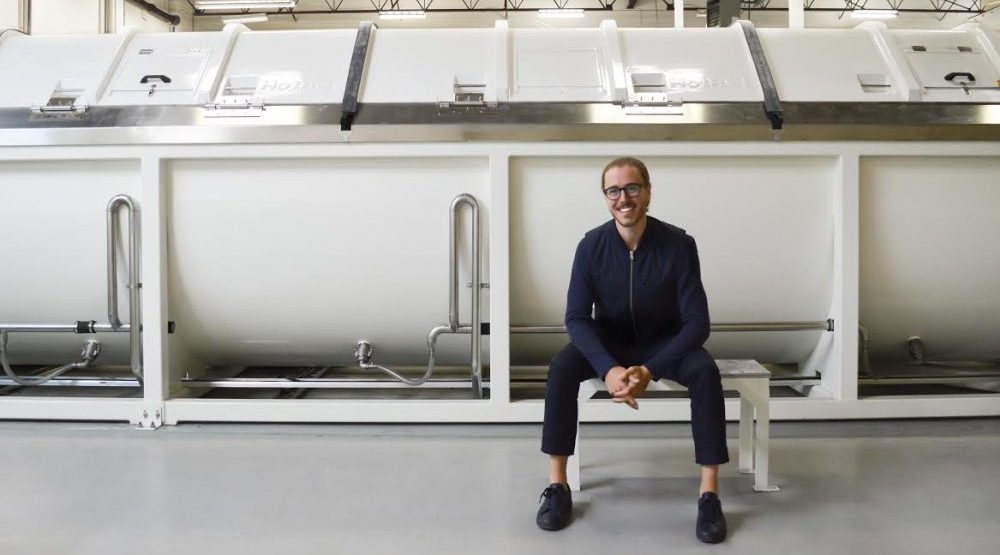 The 24-year-old has already established his composting business, Hop, successfully in Calgary and now he is bringing the environmentally-conscious enterprise to Vancouver.

Davies’ passion for composting came after his family dog, Willie, was poisoned by fertilizer.  “(Willie) developed debilitating pancreatitis and was luckily nursed back to health. But all in all, it was an eye-opening experience for me in just recognizing the dangers of using what is legally labeled as a poison in growing our food,” he told Daily Hive.

So he started to research organic alternatives to using fertilizer and found that organic farms had crop yields 50 to 80%  lower than the farms that use synthetic practices.

He wanted to solve this problem by creating the first “craft” compost, which would boost crop yields and help grow safe, clean, sustainable, produce. What Davies came up with is known today as Hop Compost.

Hop works with local restaurants and provides them with bins to throw away their food waste. The company then collects the food waste and takes it to their compost facility and that is where the magic happens.

“The materials are loaded into the vessels in small batches, about 98% smaller than the industry standard so we can have perfect quality control on the ingredients going in,” said Davies.

The vessel is able to take live readings of the organic material’s CO2 respiration rate, the acidity, and the heat. Using all of that data, the perfect environment is created within the vessel for microbe activity.

“With perfectly harmonized microbe activity what we see is very rapid composting. So opposed to the (composting process) taking six to 12 months, it takes about 11 days,” said Davies. “Because of the quality control, it produces– by third party standards– the most nutrient rich organic compost in Canada.”

Hop was such a success in Calgary, that Davies is moving the operation to Vancouver. The company’s composting facility is located on Marine and Fraser and Hop has already partnered with several restaurants and cafes, such as Royal Dinette, Matchstick Coffee Roasters, and Earls.

Hop’s compost has also been picked up retailers such as Whole Foods. Davies has the goal of establishing closed loop food systems with restaurants and farms.

“By closed loop, what I mean is that food is sourced by our clients (restaurants and cafes) farm to table and that way we are able to return those scraps table to farm. So it is a regenerative food cycle that operates without waste,” Davies said.

Hop will also sell the majority of its product to local farms that supply the restaurants partnered with the company.

After opening in Vancouver, Hop already is at 80% of its capacity and the company is already planning an expansion in the city for early 2017.

“At the same time we double our Vancouver processing facility in 2017, we will be opening up Hop in Toronto. The general (business plan) is to expand every major North American city within the next ten years and create closed loop food systems in every city we operate in,” said Davies.

The company has already saved over 3 million pounds of waste from landfills and has supplies approximately 85% of urban farmlands in Calgary with its product.

Davies is hoping to do the same in Vancouver and expects to save 2 million pounds of food waste over the next 12 months.