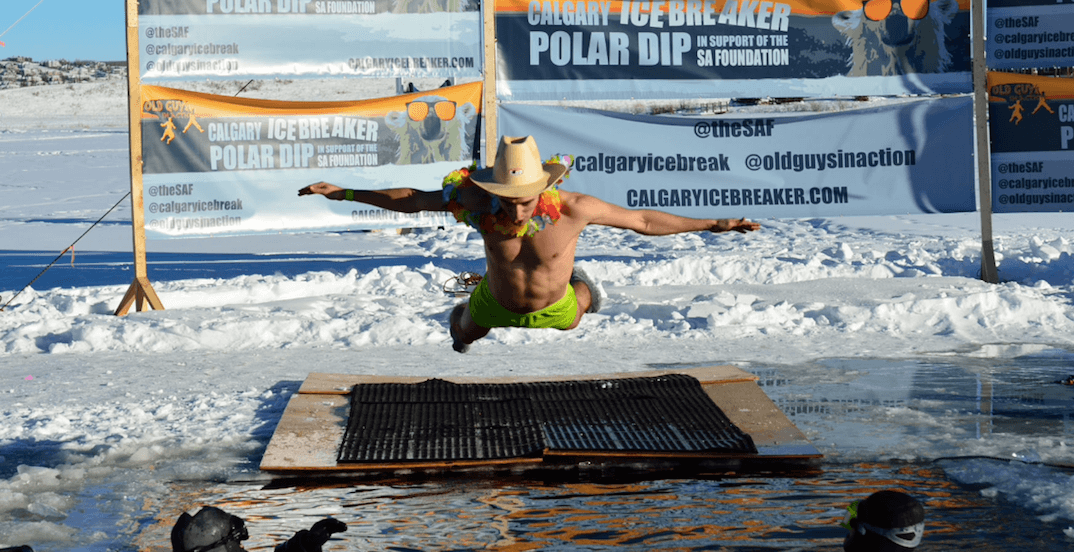 While Vancouverites over on the West Coast may have taken a dive into the Pacific for their Polar Bear Swim, Landlocked Calgarians have to get a little more creative when it comes to starting the year off right.

The annual Calgary Icebreakers Polar Dip was held at Mahogany Home Owner’s Beach this Tuesday, January 1, and the event invited Calgarians out to dip, dive, or donate towards ending human slavery around the world.

“45 million people live as slaves today. 80% are female. 50% are children. Many are forced to be sex slaves. If this is unacceptable to you, then we urge you to #dipordonate,” the event’s Facebook description read.

A group of Calgarians arrived at the frozen lake shortly before 1 pm to participate, and a large square block of ice was cut out, allowing would-be swimmers to jump, walk, or cautiously wade their way into the chilly waters.

According to the Calgary Icebreakers website, this year’s fundraiser raised just short of $100,000 towards ending human slavery, landing at a total of $91,100. Donations are still being accepted through the site and any amount helps.

The 10th anniversary of the first polar dip saw creative costumes, dozens of volunteers, and (thankfully for the swimmers) a relatively warm 2°C day.

Photos and videos of the event were shared on social media, and we’ve collected together a few of our favourites to share with you:

Not a bad way to start the new year!