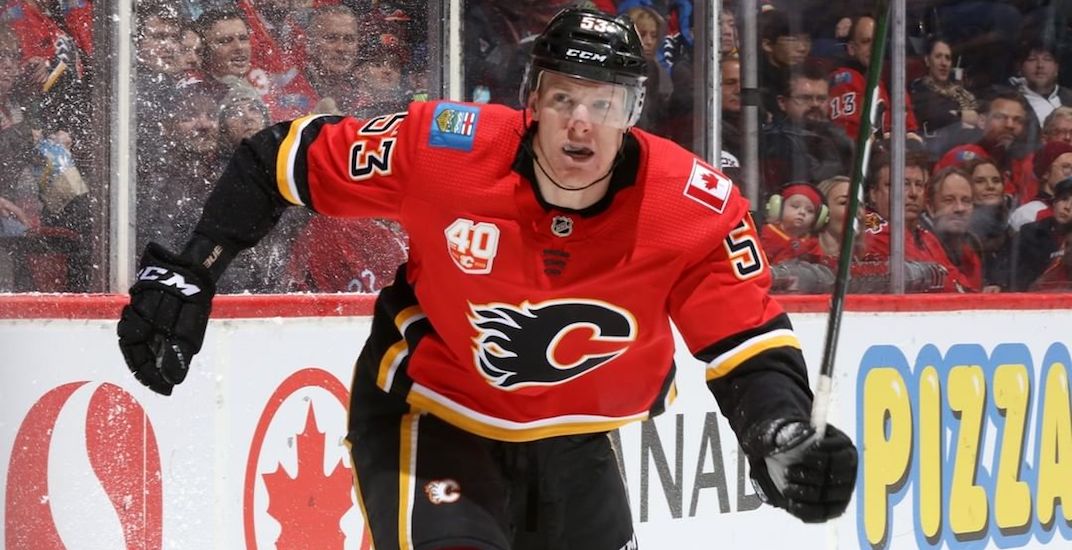 Not too many positives came out of Thursday’s 3-2 loss to for the Calgary Flames, but the night marked a special milestone for winger Buddy Robinson.

After years of toiling in the minors looking for a sustained shot at the NHL, Robinson took to the ice against the Nashville Predators for his fifth game in a Flames uniform.

Although it might not seem like much in the grand scheme of things, that five-game plateau marked a new career high for the power forward.

Not only that, but Robinson is getting the first real look of his NHL career next to two of the team’s most prolific offensive weapons in Johnny Gaudreau and Sean Monahan.

The former of which he shares a unique history with.

Growing up in New Jersey, Robinson attended Gloucester Catholic High School with Gaudreau where the pair landed on the radars of collegiate scouts.

Feel-good story: Johnny Gaudreau & Buddy Robinson were teammates at Gloucester Catholic in New Jersey over a decade ago. Robinson was called up from AHL the other day and was in Calgary lineup alongside Gaudreau last night

It was enough to earn some attention from the Ottawa Senators however, who took a chance on the sophomore and signed him to a three-year, entry-level contract.

Never once hearing his name at the NHL Draft, Robinson spent three years climbing through the American Hockey League before earning his first call up to the big leagues in 2016.

Robinson would go on to tally one goal and two points over seven games with Ottawa, but wouldn’t see another NHL game for close to four years.

Stints with the San Jose Sharks and Winnipeg Jets AHL affiliates would follow, along with over 100 games with Calgary’s farm team in Stockton.

A veteran of close to 500 games in the minors, the now 28-year-old Robinson received his long-awaited call back to the mountaintop ahead of Calgary’s tilt on January 28th against St. Louis.

Speaking with reporters after his first promotion in the Flames system, Robinson said he felt better equipped to handle the rigours of living on the bubble.

“I spent a lot of time in my first couple years worrying about this and that, guys going down and up,” said Robinson to Flames TV. “It takes away from you being able to focus on just your game. So, a few years under the belt I understand how it goes.”

It took a few games for Robinson to find his footing back at the NHL level, but his game fully surfaced on February 1 in the latest edition of the ‘Battle of Alberta.’

While his team was blown out by an 8-3 score on home ice, Robinson had easily one of the most productive game of his pro career.

Just under 13 minutes into the first period, Gaudreau dished a pass to a streaking Robinson who beat an Oilers defender and netted his second ever NHL goal.

That goal was quickly overshadowed a few minutes later however, as Robinson and Edmonton’s Jujhar Khaira decided to drop the gloves in a brief, but spirited tilt.

Although the verdict went firmly in Khaira’s favour, it marked the first career NHL fight for Robinson who had previously scrapped 17 times in the minors.

Since that breakout game that saw Robinson finish one assist short of a Gordie Howe hat-trick, his stat sheet has gone a bit more quiet.

In two games against San Jose and Nashville, he’s put up just one shot in 21 minutes of ice time.

The one area where Robinson has been undeniable has been his ability to cause havoc with his body, putting up 14 hits over his recent stint with the Flames.

Utilizing his monster 6-foot-6, 232 pound frame will be paramount for Robinson in sticking in Calgary’s lineup for the remainder of the season, providing something that very few of his teammates can offer.

🎵 And here's to you, Buddy Robinson 🎵 pic.twitter.com/rBHn25WMXf

Maybe the biggest surprise of Robinson’s last two weeks has been the company he’s been placed beside, anchoring Calgary’s second line with Gaudreau and Monahan.

Most new call-ups to the big leagues will fight for ice time once they first arrive, but Robinson has been placed in a position to succeed by interim head coach Geoff Ward.

Something that Robinson acknowledged to reporters.

“To be on a line with them is something that I’m taking very serious and I’m not taking lightly,” said Robinson. “It’s an honour to be out there with them. For me, to keep that going I need to work hard and create as much space and time for them with the puck.”

Between Mark Jankowski, Tobias Rieder, Zac Rinaldo, and Robinson fighting for space in Calgary’s lineup on a nightly basis, there’s no guarantee the latter will firmly stick.

Dressing for five consecutive games bodes well for the American, but Ward hasn’t been shy in shaking up his lines lately.

A shake up could also come by way of trade if the Flames continue down their path of underachieving, causing more uncertainty for bubble players like Robinson.

But if there’s one thing the undrafted power forward has proven over his career, it’s that perseverance pays off and has helped him defy the odds to reach the show.