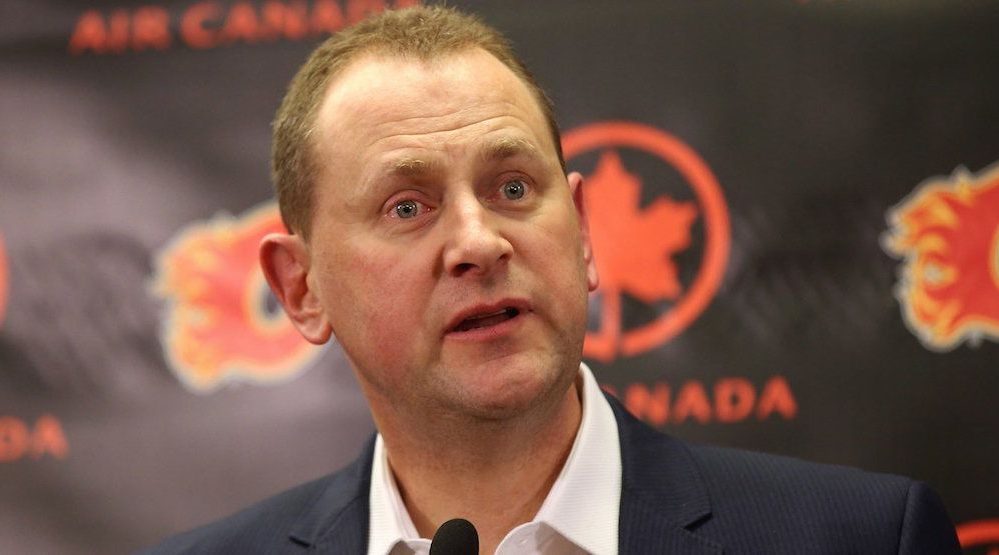 Behind every great NHL team is an architect responsible for assembling a collection of players that can compete for a championship.

Ken Holland, Stan Bowman, and Jim Rutherford have been able to win multiple Stanley Cups over the last 15 years by drafting well, trading smart, and managing hungry players from veterans to prospects.

While he still has a long way to go before entering that conversation, newly extended Flames GM Brad Treliving is on the right path no doubt.

Bouncing around the minor leagues as a defenceman in the early-to-mid 1990s, Treliving retired as a player in 1995 and immediately focused on becoming a hockey executive in helping to found the Western Professional Hockey League the following year.

Before joining the Flames in 2014, Treliving also served as assistant GM of the Phoenix Coyotes for 11 years under current Calgary pro scout Don Maloney.

Over his three seasons at the helm of the Flames, Treliving has been able to help transform the roster from an older, underachieving group to a young squad capable of contending for the playoffs year after year.

Of Calgary’ 23-man roster used during this year’s playoffs, only eight remain from the Flames’ 2013-14 season which included a 27th place finish and saw former GM Jay Feaster lose his job.

From the beginning, Treliving has pulled no punches when it comes to using draft picks as currency. Since June 28, 2014, the Flames have made 15 trades involving draft picks, receiving eight and trading away seven.

The biggest move during his time in Calgary involved three of those picks, as the Flames acquired defenceman Dougie Hamilton from the Boston Bruins in exchange for a 2015 first rounder and two 2015 second rounders on June 26, 2015.

None of Zachary Senyshyn, Jakob Forsbacka-Karlsson, or Jeremy Lauzon have made their NHL debuts, so it’s still unsure who will eventually win this deal.

However, Hamilton’s 93 points in 163 games has provided a huge boost to the blueline, especially for a man who hasn’t even celebrated his 24th birthday yet.

It's not exactly this but you could look at it this way. Flames trade Baertschi, Glencross and a 1st rd pick for Hamilton and a 3rd rd pick.

This also goes the other way, as Treliving hasn’t been shy from trading away roster players to try to gain picks.

Curtis Glencross, Sven Baertschi, Max Reinhart, Jiri Hudler, David Jones, and Kris Russell were all moved by Treliving, with some of the draft picks acquired used to select prospects such as Rasmus Andersson, Tyler Parsons, Dillon Dube, and Matthew Phillips.

Focusing on skill rather than size, Treliving has also made his voice heard when it comes to Calgary being active in the free agent market.

Michael Frolik, Kris Versteeg, and Chad Johnson were staples in Calgary’s lineup this season and it’s likely at least two will be back with the Flames come training camp in the fall.

Of course no GM bats 1.000, as contracts to Troy Brouwer, Mason Raymond, and Deryk Engelland have been panned for their length and amount.

But, where Treliving has been too generous with the Flames salary cap, he’s also been able to ink his core to fairly reasonable, lengthy deals.

Mark Giordano, Sean Monahan, and Johnny Gaudreau are all earning under $7 million per season until at least 2021-22, while T.J. Brodie is on a sweetheart deal of $4.65 per year over the next three seasons.

With young players such as Sam Bennett and Matthew Tkachuk still on their entry-level deals, the Flames will need some wiggle room to fit them under the cap when the time comes for their contract extensions.

Treliving said to Flames TV that the direction of the team is a positive one.

“You always want to make steps and make progress and grow, and we’re doing that both on the ice and off the ice,” said Treliving. “As I look at it, I think we’re in a much better place than we were three years ago. But that said, we know we’ve got much work to do, so that’s where the excitement part comes in.”

It is curious as to why this extension took so long to get done, as his contract expired this off-season and other teams such as the Buffalo Sabres were reportedly interested.

Brad Treliving has been suggested as a fit in Buf. I sense the Flames will attempt to extend their GM's contract as early as next week.

In the end, Ken King and Flames ownership made the smart move in extending their GM over the next few years which helps provide some stability off the ice.

Calgary is just one year removed from firing Bob Hartley, and while Glen Gulutzan had a successful first season behind the Flames bench, losing another piece of hockey operations would have been a tough pill to swallow.

Even with his new extension, the work continues for Treliving.

This off-season will be one of the busiest in recent memory with the Vegas Golden Knights expansion draft kicking off the summer, with the NHL Entry Draft, and free agency period to follow.

Goaltending issues still circle around the team, along with providing reliable depth scoring on a nightly basis.

But, after making the playoffs two of the last three years, locking up their core on offence and defence and building their prospect pool, it’s clear to see the Flames are on the right path again.

And judging by the reaction of Calgary fans on Monday, it seems they too are confident in the builder of this franchise.