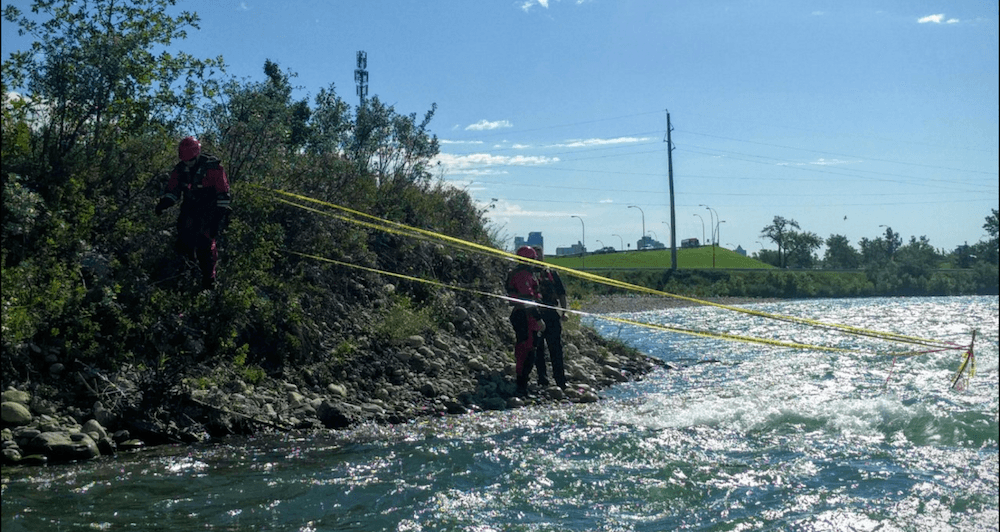 The City of Calgary Fire Department and TransAlta have teamed up to remove hazardous material found in the Bow River over the weekend.

The city and Calgary Fire was alerted to rafts suddenly being deflated just west of Crowchild Trail and quickly put up caution tape to mark the area around the debris.

“We contacted TransAlta utilities to help us. They’re holding water back at the Bears Paw dam until later today so we can go in and clear the rebar,” Calgary Fire Deputy Chief Alan Ball told Daily Hive.

The normal summer river levels are around 100 meters cubed and TransAlta lowered the river down to winter levers around 65 meters cubed on Tuesday.

So far, 80 pieces of rebar have been cut off to leave at least a meter of space from the debris to the surface of regular summer water levels.

Calgary Fire will be attaching a temporary boom around the edge of the island to provide a bumper for rafters. A drone is circling the area to capture photos for the CFD so they can come up with a longer term strategy.

Water levels will be back to normal around sunset on Tuesday.