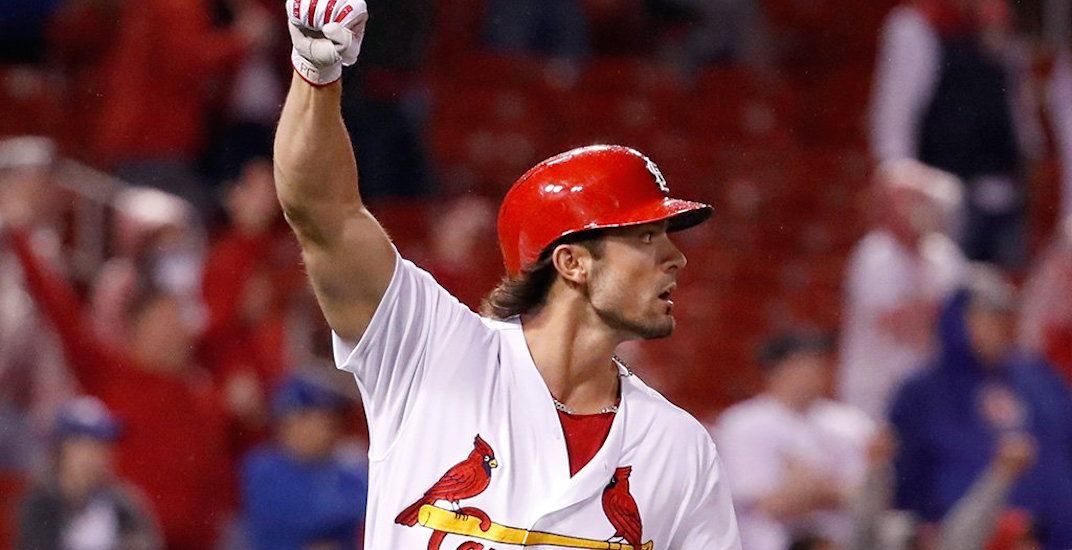 Instead of making a blockbuster trade or signing a high-impact free agent, it looks like the Toronto Blue Jays are going with the “quantity over quality” approach this offseason.

Another day and another trade at a position which the team desperately needed help last year. In a surprising and unexpected move, the Toronto Blue Jays acquired outfielder Randal Grichuk from the St. Louis Cardinals in exchange for reliever Dominic Leone and pitching prospect Conner Greene.

This was the second move the Blue Jays have made for an outfielder this week as they also signed Curtis Granderson to one-year,$5 million deal.

In Grichuk, the Blue Jays get a multi-position outfielder from the Cardinals. The 26-year-old played 107 games in the outfield for St. Louis last year (58 in left, 55 in right, 4 in centre). There’s quite a bit of power in his bat as well, as Grichuk clubbed 22, 24 and 17 home runs over his last three seasons. Surely, moving to the home run-friendly Rogers Centre will only elevate his home run totals moving forward.

The Blue Jays lose one of the mainstays in the bullpen from last year in the form of Leone, but with a bevy of relief options on the 40-man roster, he became an expendable commodity, as relievers usually are. Leone’s 2017 season out of the bullpen was impressive, but considering how volatile bullpen arms are, now was likely the time for the Blue Jays to sell high on him as a reliever.

Speaking of relievers, after a disappointing season in the Blue Jays’ minor league system, many believe that Greene was destined to become a reliever – not the high impact starter as was hoped. He showed some promise in his 2015 and 2016 seasons at Single A and Double A, but Greene took a step backwards in his development during his 2017 season. Despite a power arm with the ability to throw 100 miles per hour, the once highly coveted prospect was shipped as a trade chip to St. Louis along with Leone.

Now with Grichuk in the fold, it gives the Blue Jays a logjam in the outfield. He joins Granderson, Kevin Pillar, Teoscar Hernandez, Ezequiel Carrera and Steve Pearce; not to mention the prospects called up last year – Anthony Alford and Dwight Smith Jr. There’s no way the Blue Jays carry six outfielders on the roster to start the 2018 season, which means Hernandez is likely tagged to begin the year at Triple A Buffalo.

That still leaves the Blue Jays with five outfielders, which means there may be another trade on the horizon. Surely, another shoe has to drop involving a subsequent trade or signing. Considering how quickly and quietly the Grichuk trade took place, it wouldn’t be shocking if the Blue Jays dealt one of their preexisting outfielders.

Pearce, Pillar and Carrera are three names who could be shopped by the Blue Jays in the coming weeks leading up to Opening Day. Although, there may not be much of a market for these players currently, but things can change quickly as Spring Training gets underway.

Getting back to Grichuk, he’s a talented player with some potential upside coming over to the American League and hitting in a smaller ballpark in Toronto. He joins the Blue Jays elusive under-30 club and is under team control for the next three years.

For a player who’s already hit 24 home runs in a season, he has the ability to unlock some 30-plus home run power with the Blue Jays; which is far more than any Toronto outfielder last season (Jose Bautista had 23).

Don’t exactly rush out and get your Grichuk jersey yet, but Blue Jays fans will surely warm up to his name in the coming years.