If Beakerhead, big bunnies and inflatable robot greeting aliens teach you anything, it is that public art can be extremely whimsical. So it’s a shame the kind of art that comes with Beakerhead is only temporary.

Public art really does act to liven up our lives. I’d love to see El Pulpo Mechanico or the Raygun Gothic Rocketship permanently displayed in Calgary as it would be better than most of the art we have in place in perpetuity.

There’s no question that the public art debate has risen from the ashes again. The City of Calgary has mandated that up to one per cent of a development project’s cost be spent on public art. For instance, a $43 million road connection near the airport has led to a $470,000 on a big blue ring and a multi-million dollar water treatment facility includes $236,000 for a display of LED horses.

Public art can be wonderful and enjoyable, but costly. The Mayor has said he won’t re-open the public art debate, he’s fine with it. The city has projects commissioned for new recreation centres ranging from $150,000 to $1.1 million, and there is still $3 million that “needs” to be spent on public art along the West LRT.

Have a look at these conversation pieces in Calgary and see if you agree which are the best and worst public art in Calgary. 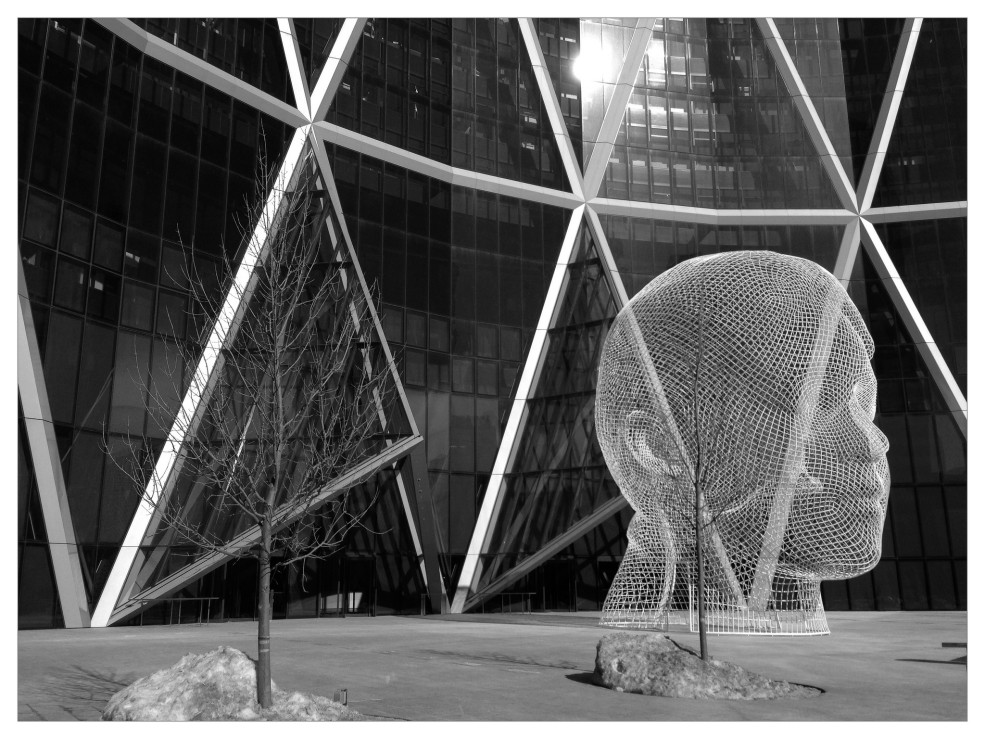 Cost: Commissioned by Encana
Artist: Jaume Plensa
Year: 2012
Location: Bow Tower, Downtown
Why: This piece is a jewel in Calgary’s public art crown. It is simple, it is imaginative, it is a place I stop with my sons each time we visit downtown. This is what public art should be. 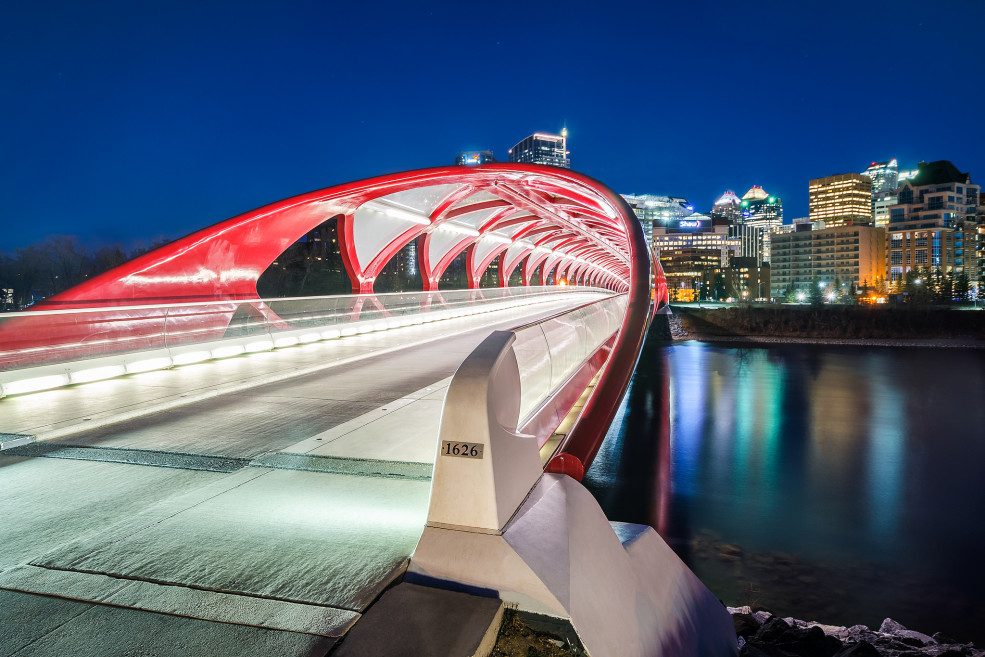 Cost: $24.5 million
Artist: Santiago Calatrava
Year: 2012
Location: Bow River, Downtown
Why: The project was plagued with cost overruns and delays, but it has since become an integral part of Calgary’s skyline. While you could still debate why it was built, you can’t argue with the look of the finished product. It is infrastructure as public art. Perfect.

Cost: $66,500
Artist: Incipio Modo
Year: 2012
Location: Poetic Park Plaza
Why: Every building in the downtown core has some sort of sculpture out front. Many are interpretive swirls, helixes, or shapes. Very few invoke fear. These giant insects in Poetic Park Plaza warn of the rise of machines and the Matrix like future that could await us. Fascinating and very creepy.

Cost: Donated
Artist: William McElcheran
Year: 1981
Location: Stephen Avenue
Why: It celebrates the business history of Calgary while being interactive. You can wonder what they’re talking about and you can interject yourself into the conversation, as Michael Buble famously did. 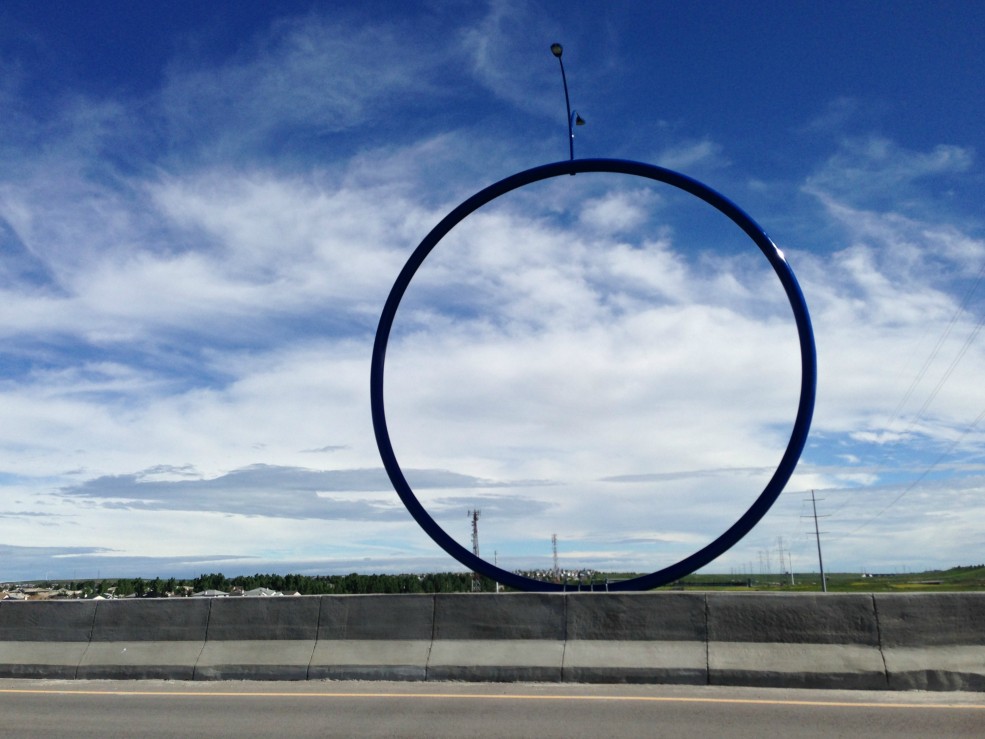 Cost: $470,000
Artist: Inges Idee
Year: 2013
Location: 96th Ave NE
Why: It’s a half million dollar hula hoop. While much public art is a focal point of discussion, this piece became the tipping point. Even the public art defending Mayor of Calgary can’t defend this “awful” piece.

Cost: $236,000
Artist: Sans Façon
Year: 2015
Location: Forest Lawn
Why: They just added coloured lines to the outside of a building now dubbed “The Poop Palace.” Finding good art can be a crapshoot. By definition, this is, crappy art.

Cost: $500,000
Artist: Michel de Broin
Year: 2015
Location: St. Patrick’s Island
Why: This piece is actually wonderful. I think it provides inspiration, is creative and whimsical but it wasn’t fully thought out. Just days after the installation was completed, it was revealed issues were raised about the light pollution from the blooms. “A brightly lit structure right on the margin of the Bow River is ecologically insensitive,” Roland Dechesne of the Calgary chapter of the Royal Astronomical Society told the Calgary Herald.

Cost: $650,000
Artist: Julian Opie
Year: 2012
Location: East Village
Why: Head east out of downtown along 5th Street and you’ll see the people at the Promenade walking over the edge of the overpass. In a province that loves distracted driving fines, how can this be legal? Also, it’s not particularly interesting. It’s just cartoon people hovering over an overpass walking. 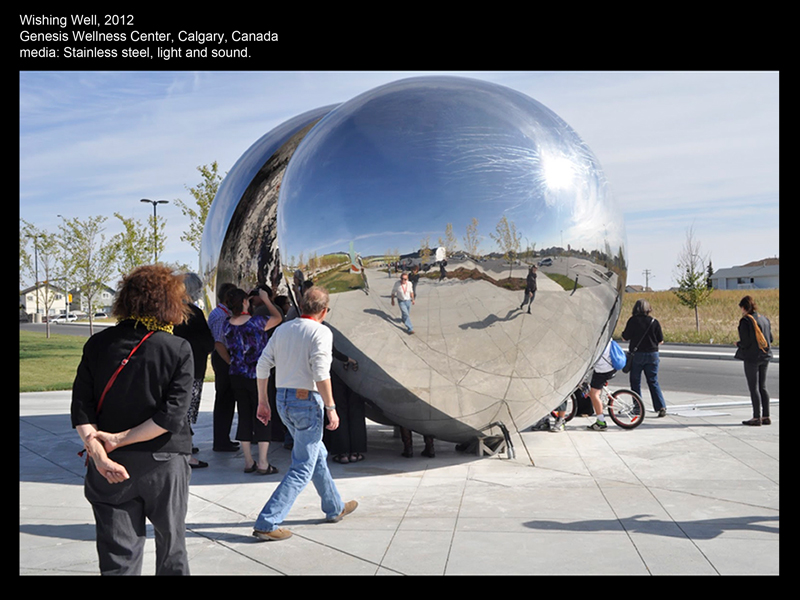 The Wishing Well at the Genesis Centre in 2013. Image by Living Lenses

Cost: $559,000
Artist: Living Lenses
Year: 2013
Location: Decommissioned
Why: This piece at the Genesis Centre was absolutely beautiful, but it wasn’t practical. When it first went up, sun reflections sent a visitor’s coat up in flames and the piece was fenced off for more than a year. The artists tried to re-work the piece safely, but were unsuccessful.

If we’re going to spend public money on public art in Calgary, perhaps the art budget could be part of the original design. No need to go overboard, just create great public infrastructure that inspires – like what has been proposed in Iceland. 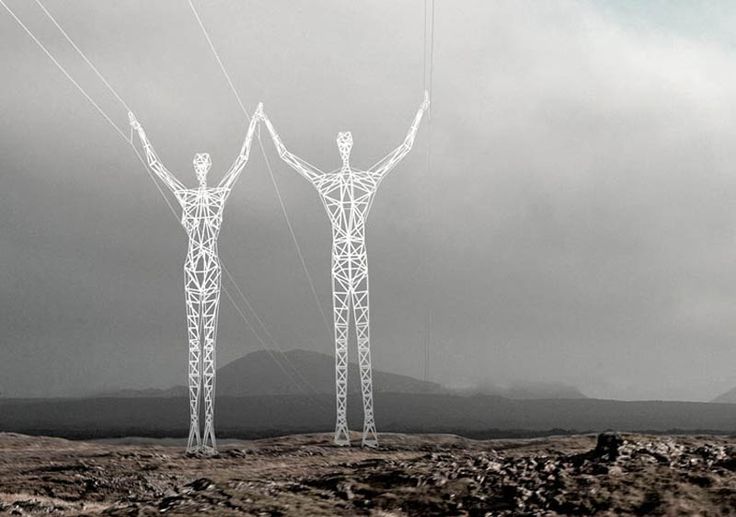