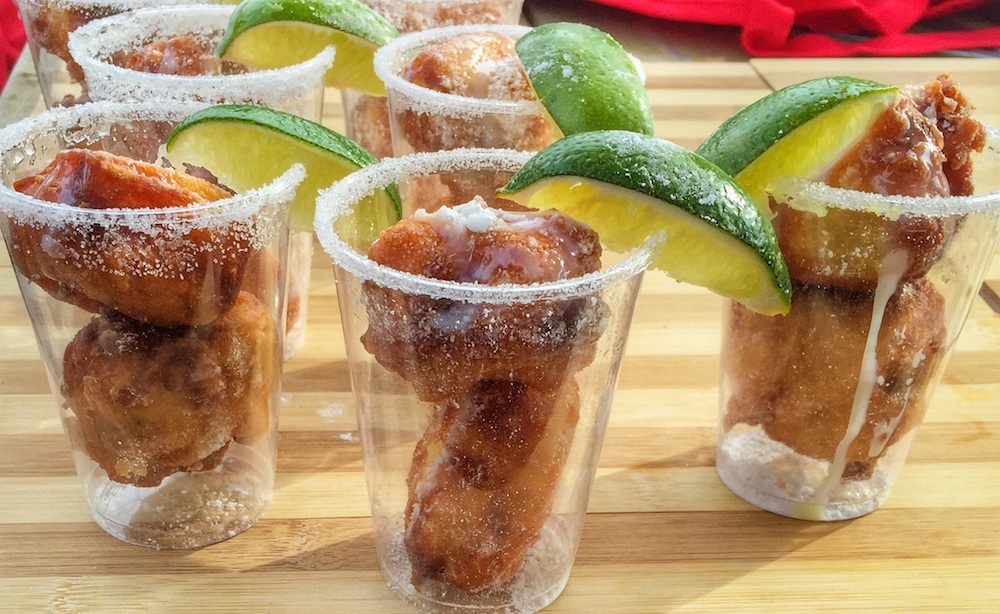 Sneek-A-Peek, the unofficial kick off to the Calgary Stampede, gives everyone an small taste of all the new rides, games, and events at the Midway this year. But let’s be honest, all anyone is ever talking about is all the crazy and zany new foods offered by a variety of vendors on the grounds. Every year, these new additions are put to the test in front of a panel of celebrity judges to crown a winner in both savoury and sweet categories.

This year’s panel of celebrities included a trio of local hockey stars, a pair of Olympians, and even one lucky member chosen from the crowd. Whether by design or not, including someone from the crowd was highly entertaining.

With 34 new culinary creations being offered on the midway this year, trying that many dishes would be a challenge for Joey Chesnut, let alone these judges. The field was broken up into six savoury and six sweet offerings. 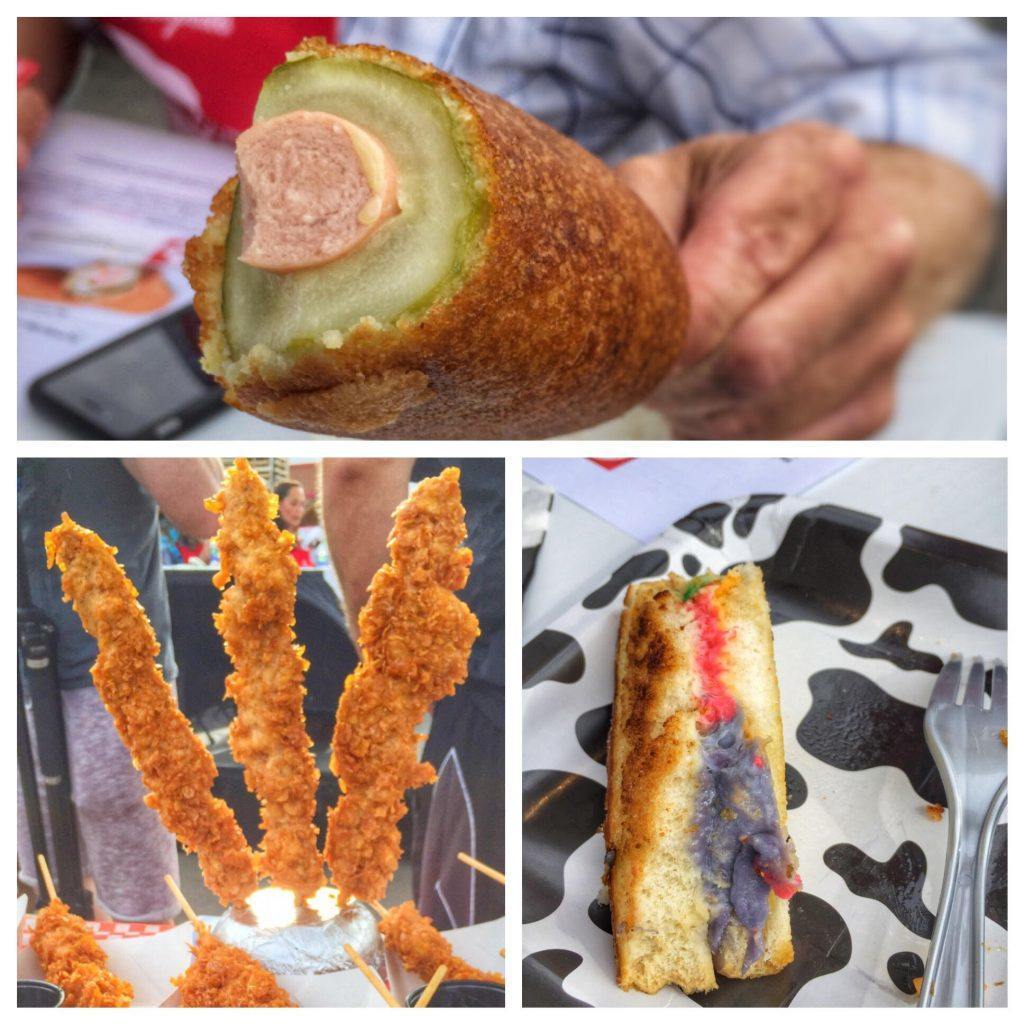 The savoury dishes included the Big Pickle Dog (a hot dog stuffed into a pickle that is battered and fried) which was met with mixed review from the judges. There were two dishes presented on a stick, a Meatball Sub and Cornflake Crusted Chicken, which are always fan favourites.

The colourful Fruit Infused Grilled Cheese Sandwich and the Mac & Cheese Stuffed Burgers challenged the judges in coming up with politically correct comments. The star of show was courtesy of International Perogies with their Teriyaki Chicken Perogies: mini cheese and potato perogies topped with sautéed onions, Sriracha mayo, a ginger teriyaki sauce and crispy chicken. When the judges were polled on their favourite savoury dish, these mini dumplings with an Asian twist was preferred by seven of the 10 judges. 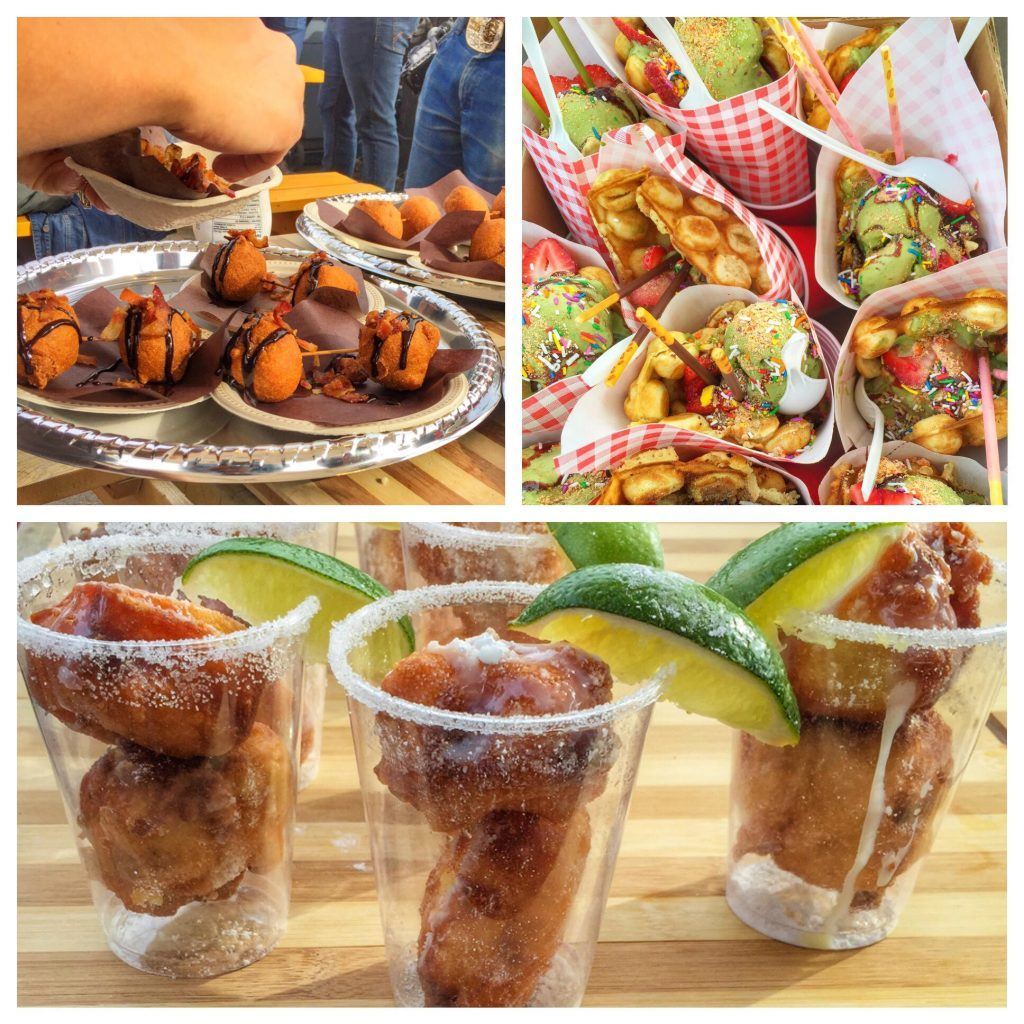 The sweet offerings were filled with deep fried treats such as Deep Fried Tequila Bites, which is a sponge cake batter mixed with tequila and fried until golden and crispy. If presentation points were offered, I think the PB Dumbells would have scored major points. Peanut Butter and bacon battered and fried, topped with a chocolate sauce and bacon and skewered with a toothpick. This sweet treat was delivered by a bunch of gentlemen who definitely lift, which instantly sold most of the female judges.

Another dramatic entry was the Canadian Beaver Balls. These were tossed in cinnamon and sugar, topped with a sticky toffee, deep fried crickets, and meal worms, and, to top it all off, these tasty bites were delivered by Canadian Mounties, on a sled, with mini Canadian flags. Quite patriotic, eh? But the fried creepy crawlers were something not all the judges were interested in consuming; thankfully they were served on the side.

Other desserts included a Hong Kong Style Waffle Cone stuffed with your choice of fresh ice cream, and a PBO Stack, which saw a Reese Peanut Butter Cup sandwiched by two Oreo cookies before being battered and fried. While all of those desserts sounded good enough to win, the winner by the slightest of margins ended up being the Salted Caramel Deep Fried Coffee, which was aptly described as a combination of a Timbit and a cup of coffee, all in one bite.

Safe to say, all of the judges are surely enjoying some Pepto Bismal, Gaviscon, Tums, and Zantac, but hopefully not all combined. Congrats to the winning vendors. Go check out their tasty offerings when you visit the Midway over the next week.

So what are your favourite foods from the midway this year? Let us know on social media by tagging #dhyycfood!

Aadil Fazal is a Calgary food blogger with great passion for the local food scene. Combining his love of food and photography, he aims to provide YYC with a combination of delicious food pictures with his detailed restaurant reviews. You can check out his blog at Beltline Bites.