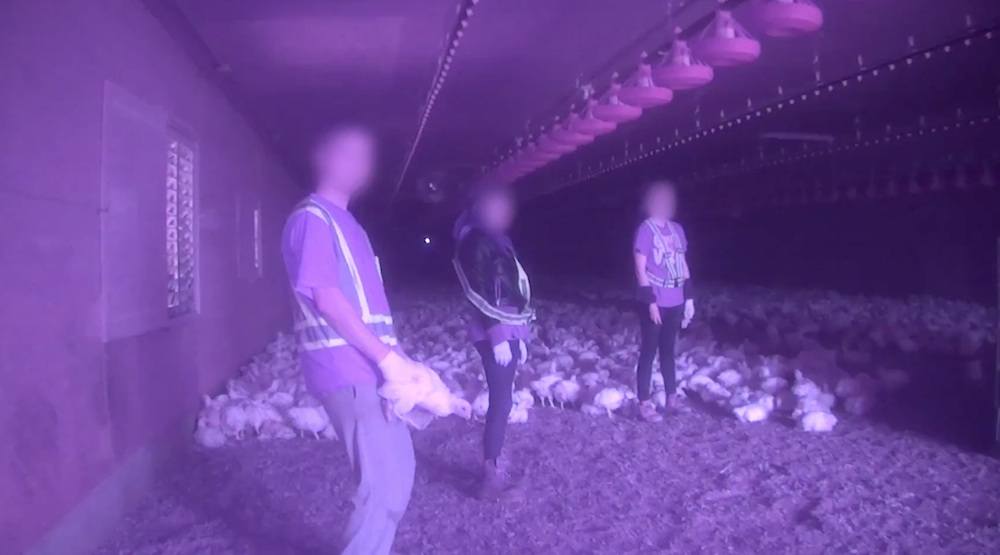 A severe case of animal cruelty is being investigated after the BC SPCA received a disturbing undercover video of workers at a Chilliwack poultry farm allegedly abusing and torturing live chickens.

According to a release by the BC SPCA, the video was filmed by Toronto-based activist group Mercy for Animals between May 10 and June 9 during the operations of Elite Farms Services Ltd., which rounds up and transports chickens to a Port Coquitlam slaughter plant for Lilydale/Sofina Foods Inc. products.

The BC SPCA received the video on Friday, and it reportedly shows workers and even a supervisor carrying out appalling acts, including:

“The video includes some of the most brutal and sadistic acts of violence against animals I have ever seen,” said Marcie Moriarty, chief prevention and enforcement officer for the BC SPCA, in a statement. “It is extremely difficult to watch.”

“The images in this video are absolutely sickening and the individual employees and the companies involved need to be held accountable.”

Moriarty says investigators will be creating a report that will be sent to Crown counsel as soon as possible and will be recommending multiple charges of animal cruelty under both the Criminal Code of Canada and the Prevention of Cruelty to Animals Act.

Individuals and companies involved in the abuse could face a fine of up to $75,000, a maximum five-year jail sentence, and up to a lifetime ban on owning or being around animals.

In the meantime, the BC SPCA expects that the poultry industry will condemn the acts, Elite Farms Service will suspend the workers involved, and all contracts with the company in question will be suspended until the matter is resolved. An industry-wide review on the monitoring systems across the province will also be conducted.

Two years ago, a similar video sting operation by another animal activist group highlighted the abuse of dairy cows in Chilliwack.

An investigation by the BC SPCA led to charges of animal cruelty against the individuals and the company involved. It also sparked widespread dairy industry changes, and Moriarty says a similar path will be taken to protect poultry as a result of the current investigation into the chicken abuse.