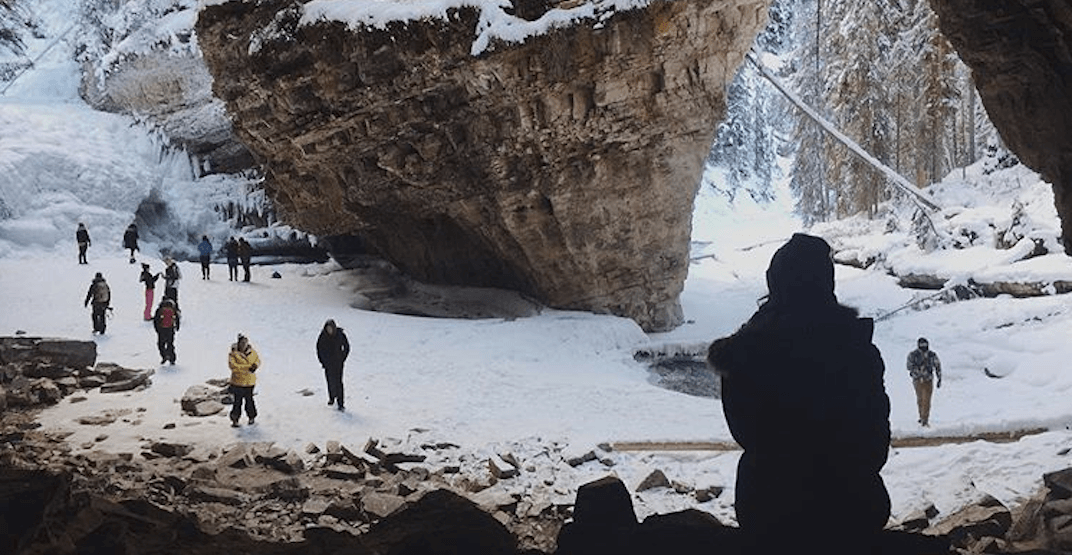 As one of Banff National Park’s most accessible areas, it’s no surprise that Johnston Canyon is popular with locals and tourists alike.

While the cascading waters and lush greenery surrounding the area is a beautiful sight, there’s just something special about the canyon during the wintertime, when the waters freeze and the air is crisp. Time seems to stand still.

Located in the Rocky Mountains just west of Banff, Johnston Canyon feels as though it’s deep in the Canadian wilderness – while really being just a short walk away from the parking lot.

From Calgary, your best bet is to take Highway One west until you reach Banff, then to continue on for another half an hour or so. Once you’re past Banff, just look for signs pointing towards the Johnston Canyon Camp Grounds, and the hiking area will be off to the right. The entire drive will take you just under two hours.

Given the time of year, there’s going to be people… and there’s not really any getting around the crowds for such a popular spot. The best time to check out Johnston Canyon in relative seclusion would be during the autumn and spring months, but there’s a reason it’s such a busy place during winter and summer.

The cascading waterfall freezes over in the winter, allowing adventurers to try their hand at ice climbing to the cliff’s top. A man-made walkway through the canyon supplies support and handrails so almost anyone can enjoy the beauty of the Rocky Mountains.

And you’ll get a few solid ‘grams out of a trip out here, that’s basically a guarantee.