Although there has been a little fluctuation in prices, the ultra-hot Canadian rental market continues to increase across the board.

While some city’s prices for one-bedroom rentals remained unchanged since last month, the most expensive in Canada has now surpassed $2000, according to the latest report by PadMapper.

Not surprisingly, Vancouver and Toronto continue their domination as the top two cities with the most expensive rental markets in Canada.

Last month, Vancouver’s median rent for one-bedroom showed a decline of 4.8%. But one month can change a lot in this market, and the price of a Vancouver one-bedroom has jumped up 1.5% from last month bringing it to $2,020. Two bedrooms have also gone up in the city, and are now renting at $3,160.

In Toronto, rent continues to increase every month as the city saw a 4.3% hike in one bedroom rentals, which are now $1,930. Two bedrooms also increased to $2,440. The most shocking part about rental costs in this hot city is that one-bedrooms in Toronto are up 15.6% since this time last year. Let that sink in for a minute. Actually don’t, time is money… 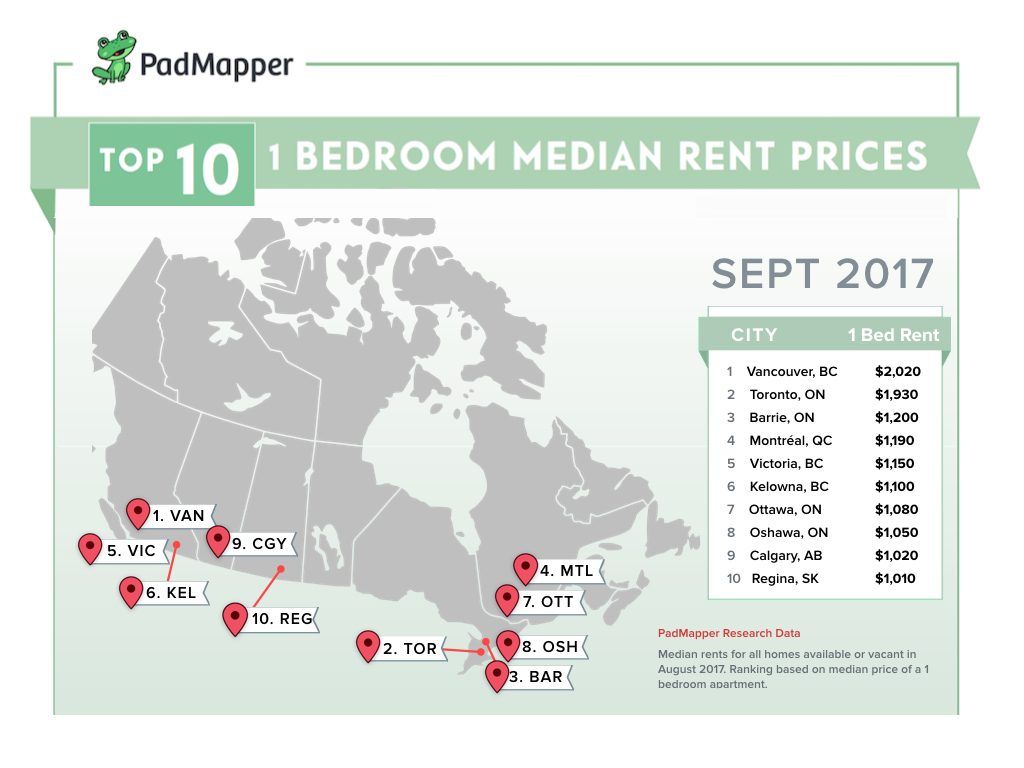 Trailing behind Toronto is Barrie, which also experienced a massive 15.4% annual growth rate over the past year. One and two bedrooms have settled this month with medians of $1,200 and $1,450, respectively, in the Ontario city.

Meanwhile, Montreal remained in fourth place. Rent in the popular Quebec city has experienced a 3.5% hike to $1,190, with two bedrooms now renting at $1,520.

Back to the west coast, where Victoria remains in fifth place with its median one bedroom costs increasing by 4.5% to $1,150, and two bedrooms growing slightly higher than last month to $1,490.

The largest drop in rental in Canada was in Quebec City, where one bedrooms dipped to $810, and two bedrooms went down 5% to $1,130.

But in Ontario, Hamilton climbed up three spots on the list to become the 11th most expensive rental market in Canada. This city’s growth rate for one bedroom units is up 5.3% to $1,000, and two bedroom rent grew 2.6% to $1,200.

Calgary remains steady, as one bedrooms are $1,020 just like last month, and two bedrooms also remain unchanged at $1,300.

The cheapest city to rent on the list is still Quebec’s Saguenay, which jumped a little to $640 for a one-bedroom, and $730 for a two bedroom. It’s probably one of the only cities in Canada where you never have to think about having a roommate these days. 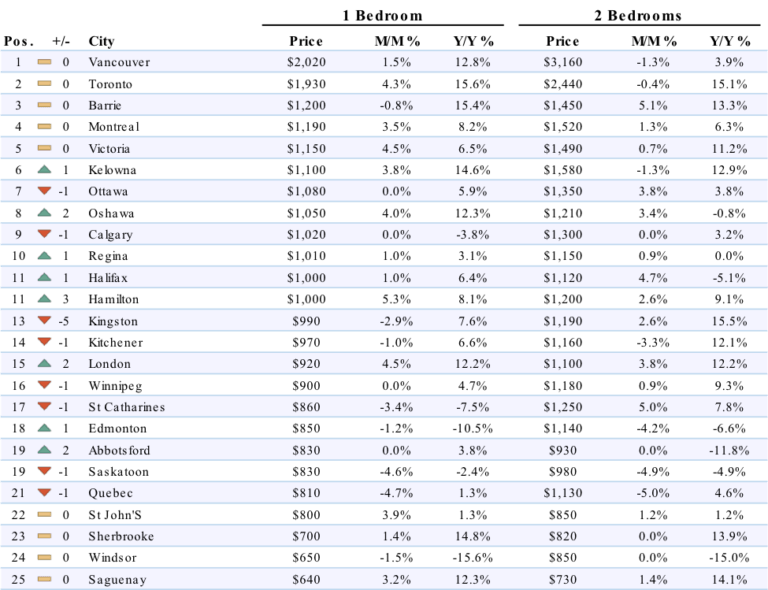