Amazon’s controversial suicide T-shirts, which hit the headlines last week off of the back of a campaign started by a 14-year-old Calgary teenager, have been discontinued after an online petition attracted more than 60,000 signatures.

The man behind the petition is 28-year-old suicide survivor and Canadian Mental Health Association employee Mark Henick. He believes the T-shirts are wrong because they communicate a dangerous message.

“These were created to mock suicide and to make a profit off it and I don’t think it’s right, and apparently 60,000 people don’t think it’s right either,” said Henick in an interview with Calgary Buzz. “This isn’t an issue of free speech, it’s not like we’re advocating that someone doesn’t express themselves.”

Henick believes that Amazon needs to take accountability for the issue.

“Amazon needs to own this, apologize and donate money to people who might be suffering,” says Henick. “This isn’t an issue of bad taste because they’re technically dangerous, when people like me have a history of suicidal ideation, it can trigger someone who hasn’t learned to get rid of that rumination.”

According to Henick, the T-shirts trivialize mental illness and have the ability to trigger vulnerable people. He also credits Amazon’s decision to pull its T-shirts in part to 14-year-old Calgary teenager Maggie Harder and other mental health advocates.

“We for whatever reason think suicide is funny and that’s a product of stigma, we are told from a young age we can’t talk about feelings, that your stuff isn’t someone’s problem,” says Henick. “I think these things are starting to change, people are having more open conversations.” 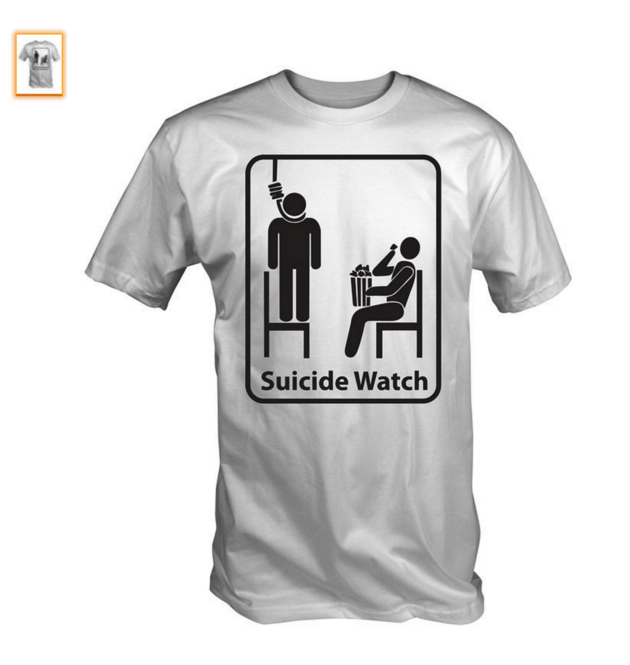