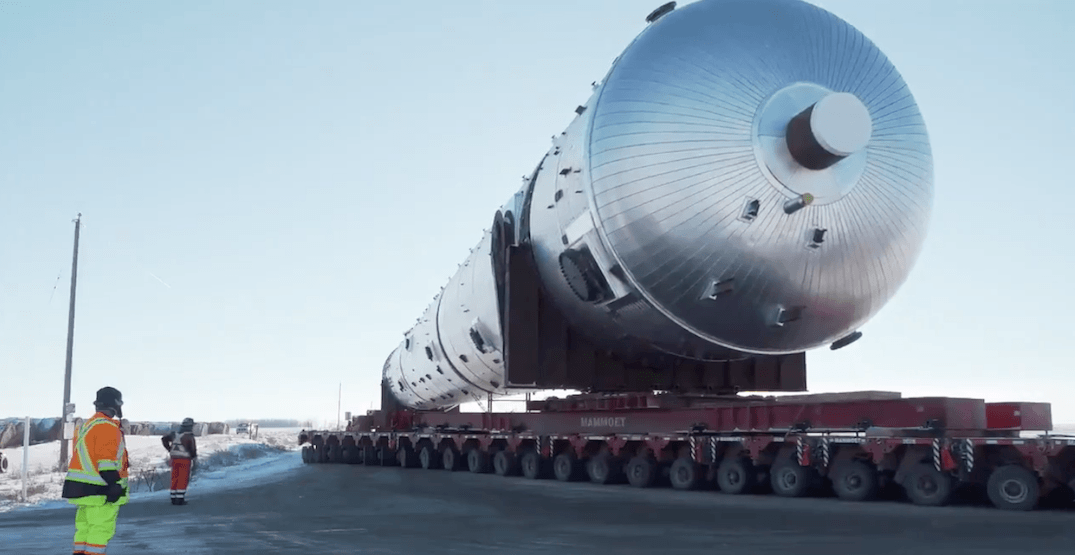 The gigantic load that journeyed north from Edmonton may have made history, but it didn’t do it very quickly.

All told, it took the 820-tonne, 96-metre long payload three days to reach its final destination outside of Fort Saskatchewan, travelling roughly 40 km from the yard at Dacro Industries.

While that may have been a complete pain in the car seat for anyone stuck behind the historically large load, watching the petrochemical splitter move via timelapse is much more satisfying.

Thankfully, our very own premier Rachel Notley has posted a few videos of the hunk of steel in action, being transported under the power of multiple semi trucks.

This is amazing to watch.
It was built by Dacro Industries for the new @inter_pipeline project.
After decades of investment going to the U.S, our government stepped up. Now, projects like these – with thousands of jobs & billions in private investment – are being #MadeInAlberta. pic.twitter.com/sLyD40PFJt

The splitter has now made it to its journey’s end at a site north of Fort Saskatchewan, and we think we speak for all Albertans by saying that we’re glad that thing didn’t roll off the side of the road on its way there.

A HUGE thank you to @ABTransComm @CityofEdmonton @edmontonpolice @EPCOR @MammoetHolding and everyone who helped out or waited patiently for the Splitter to move through the streets of Edmonton. The first night of the move was completed safely and successfully #megamove #YEG pic.twitter.com/bDsxaei872