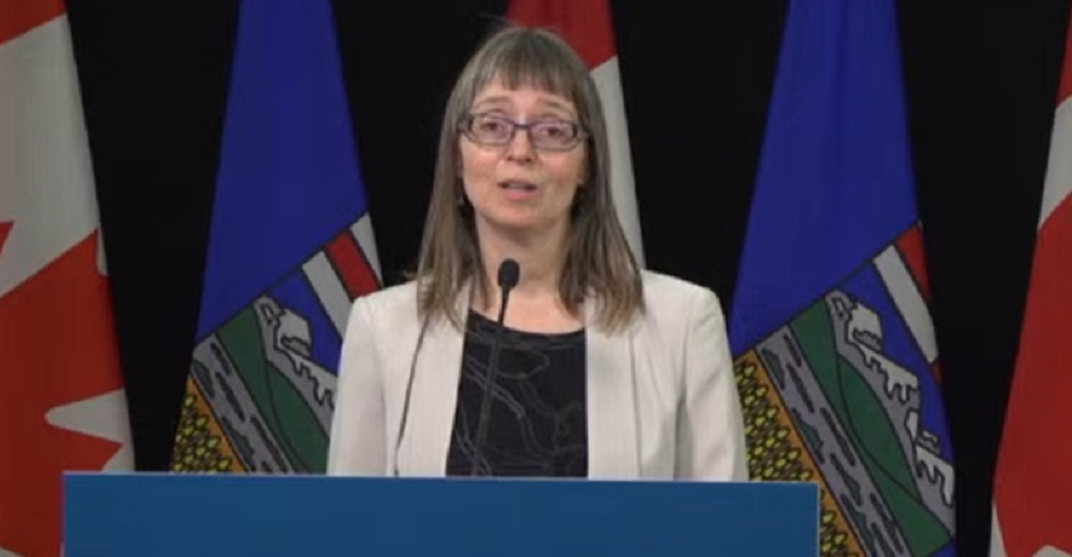 The province reported that 1,429 additional cases of COVID-19 were discovered in the last 24 hours. This is the second day in a row that over 1,300 new cases were found in Alberta.

Of the new infections, 717 were variants of concern, representing more than half of the cases discovered in the last 24 hours.

This brings the province’s active variant total to 5,457, which is nearly 45% of all active cases.

There are now 12,187 active cases in the province. A total of 340 people are in hospital due to the virus, including 83 individuals in intensive care.

Dr. Hinshaw also noted that three new deaths related to the virus were reported in the past 24 hours, raising Alberta’s death toll to 2,005.

The doctor said that, to date, three variant strains have been detected in Alberta that have health officials concerned.

“These variants are still new,” Dr. Hinshaw said. “But what we know from current evidence is that these three variants of concern are more transmissible than the earlier form of the virus.”

She noted that the B.1.1.7 strain seems to be about 50% more transmissible, while P.1 seems to be closer to twice as infectious.

“Each of these variants of concern also have some unique properties,” Dr. Hinshaw continued. “The B.1.1.7 variant seems to be able to cause more severe illness than our original strain. At this point, it’s not clear if the other two variants also have increased severity.”

Dr. Hinshaw said that all three of the vaccines that the province currently has available are effective at stopping the variant that’s most common in Alberta, the B.1.1.7. Evidence is less clear about how the vaccine stands up to the other two variants.

Dr. Hinshaw announced that, due to how common the UK variant B.1.1.7 is now, if an individual tests positive, they should assume that they have B.1.1.7.

“We will be treating cases and contacts of B.1.1.7 and the original COVID strain the same going forward,” she said.

Effective immediately, isolation requirements for both the original strain and B.1.1.7 have been aligned. To learn more about isolation, visit the Alberta government’s website.

Additionally, AHS will begin offering testing twice to close contacts of all confirmed cases, regardless of which COVID-19 strain they may have been exposed to. This is being done to give the province a better chance at quickly identifying new cases and stopping the spread of the virus.

Dr. Hinshaw reminded Albertans that COVID-19 health measures continue to remain in place, even for those who have gotten the vaccine.