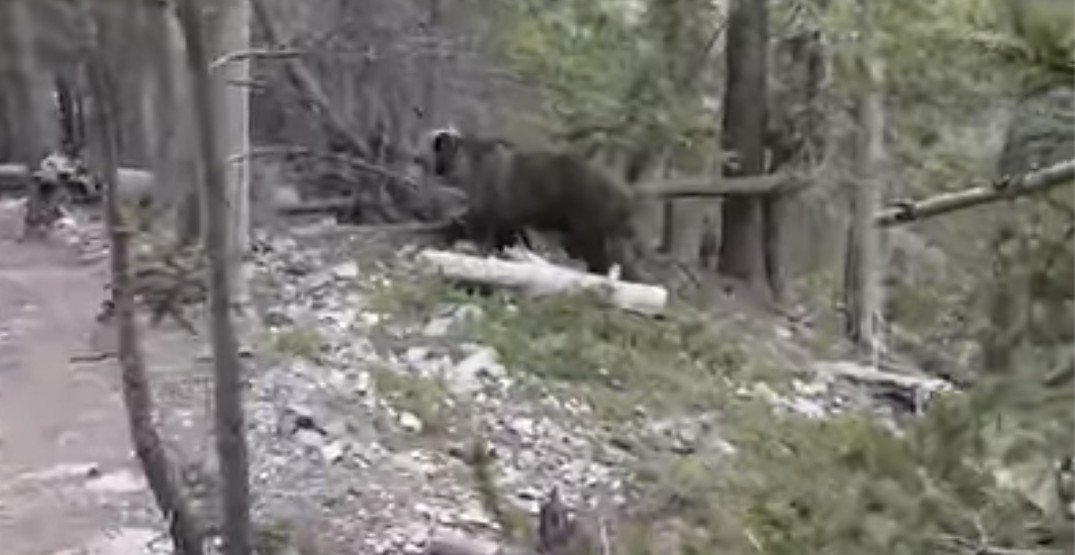 An Australian couple were venturing out on a hike in Canmore, Alberta, when they had a terrifyingly close encounter with a giant grizzly bear and it was all caught on camera.

Dale Boshoff told Daily Hive that he, his wife Jessica, and their friend Jordan Illsley, just began on the hike on the east end of Rundle in early June, when Jordan mentioned he forgot his bear spray in the car.

“I had my bear spray, so we told him to not worry about it because the chance of seeing a bear on such a busy trail was very unlikely!” Boschoff told Daily Hive.

But little did they know they would soon come face-to-face with a grizzly in the woods.

Boshoff said he spotted the bear when Jordan stopped to tie his shoelace.

He alerted both his wife and friend to warn them that they had company.

“I called out to them […] and they could tell by the tone of my voice that something was wrong,” said Boshoff.

“When they looked up, they saw the big grizzly bear walking straight towards them. They slowly backed up and I walked forward to get in front of them

Boshoff said he had his bear spray ready and the group tried their best to stay calm.

“We all backed up slowly and talked to the bear calmly. At first, he was about two to three metres away from us, and he just kept walking straight towards us.”

After about 40 seconds of backing away from the bear, Boshoff started recording the incredible encounter.

In the video, Boshoff can be heard speaking to the bear calmly as the group slowly backed off.

Eventually, the bear went on its way and the Boshoff, his wife, and friend were able to continue their hike.

“Overall, the bear didn’t look interested in us at all. He was a big beautiful bear that just went around us!” said Boshoff.

This was the group’s first up-close meeting with a bear but Boshoff says after the video was posted on social media, many people have asked them how they remained so calm during the encounter.

“We really feel the Lord was watching over us!” said Boshoff.