The Toronto Blue Jays finished strong on marathon day in Boston on Monday, getting to the Red Sox vaunted bullpen in the 8th inning to pull out a come from behind 4-3 win. That win split the series in Beantown which – after the first couple games where I was cursing everything Boston and hoping to never see them again – made for a fairly decent result.

The result moves the Jays back to .500 and, more importantly, allowed fans – myself included – to breathe a little easier prior to the three-game set the Jays are to open tonight in Baltimore.

The record may not be where fans expected, but it is worth remembering that the season is only 14 games deep.

The Jays’ offence will not be this bad forever. Troy Tulowitzki (my pre-season MVP pick as I’m sure people will gleefully remind me) and Russell Martin, despite their negative offensive value thus far, did not suddenly morph into below average players.

On the other side of the ball, the pitching, especially the starters, has been better than expected.

Someone who is putting up great numbers so far, making the spring training chatter that he was destined for the bullpen look absolutely ridiculous, is starting pitcher Aaron Sanchez.

In our season preview I reigned back my bullishness in regards to Sanchez, predicting six and a half strikeouts versus 2.8 walks per nine innings and a WHIP of 1.1.

Thus far, over his three starts, the 23-year-old has been better than I could have imagined, striking out a batter per inning while only giving up 10 hits over his 20 innings for a minuscule 0.85 WHIP.

I’d be remiss to not quickly mention (again) the smallish nature of the sample size but there is a lot to like about what we’ve seen from Aaron so far this season.

Last year lefties crushed him to the tune of a .878 OPS with all nine of his home runs allowed coming from that side of the plate. They also walked more than they struck out, posting a -3.5% K-BB%. It was ugly.

In 2016, we have seen improvement across the board.

The home run per 9 ratio still isn’t great at 1.64 but he’s cut down on the walks while striking out significantly more lefties (25% compared to 10.9% in 2015). The overall power numbers have improved as well with the slugging percentage of those on that side of the plate dropping from .488 to a far more respectable .342.

If you look at how Sanchez is working left-handers so far this season versus 2015 it’s not hard to see why he’s been having more success. 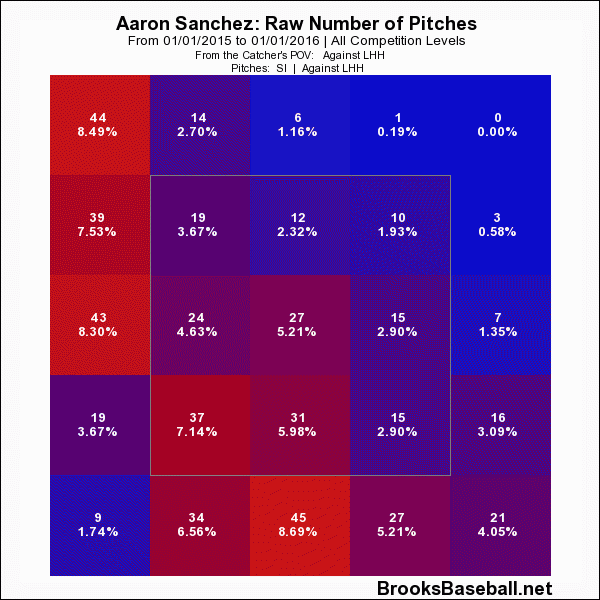 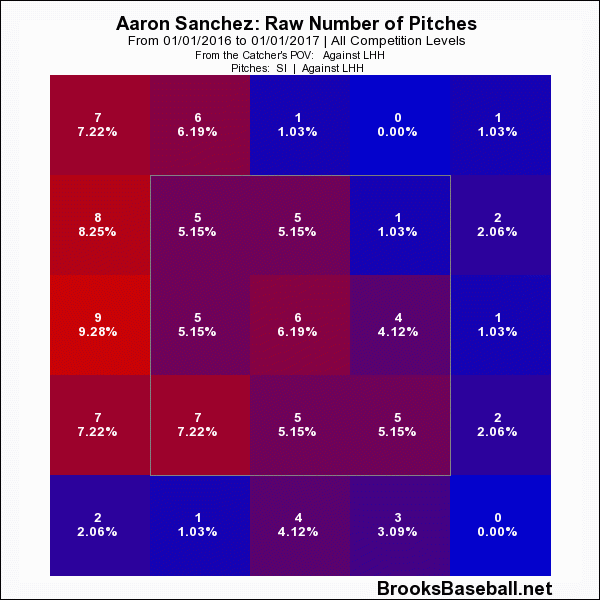 He’s filling the zone with his sinker. Hitters aren’t able to spit on those balls below their knees, waiting for the one in their wheelhouse. And when he is missing this season, it’s in on the hands, limiting the ability for hitters to extend their arms.

I don’t want to beat a dead horse here, there is still a ton of season to come. Teams will get more video on Sanchez and make the necessary adjustments. It will be up to the Jays and Sanchez to react to that.

That being said, Sanchez’ hot start has put to bed any lingering thoughts that he would have better served the Jays as a reliever. It was a non-sensical notion from the get-go.

And if you think the only weapon Sanchez has is the two-seamer, check this out:

I could literally open a beer and watch that for half an hour.