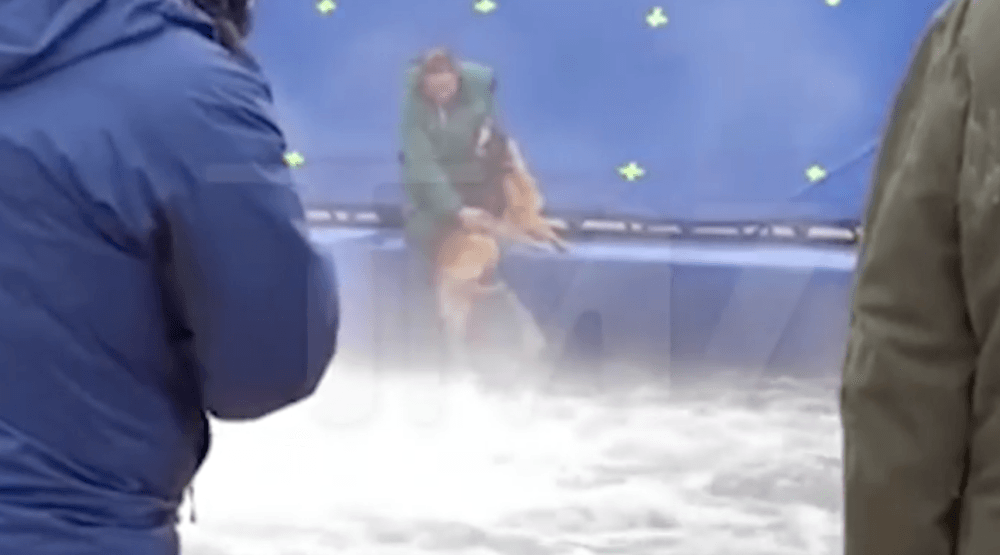 TMZ has released a video from on-set of A Dog’s Purpose filmed outside Winnipeg, Manitoba in November 2015, that offers gut-wrenching footage of possible animal abuse.

The two clips cut together first show a German Shepherd clawing his way off the edge of pool as a trainer tries to coax him into rough waters. Next, a sequence where a handler calls “Cut it” on a scene as the dog is apparently submerged underwater too long.

According to TMZ, “at least one member of the crew was extremely disturbed by the dog’s treatment during this scene”.

A statement from Amblin Entertainment, the production company behind the film, writes that the film is:

…a celebration of the special connection between humans and their dogs. And in the spirit of this relationship, the Amblin production team followed rigorous protocols to foster an ethical and safe environment for the animals.

While we continue to review the circumstances shown in the edited footage, Amblin is confident that great care and concern was shown for the German Shepherd Hercules, as well as for all of the other dogs featured throughout the production of the film. There were several days of rehearsal of the water scenes to ensure Hercules was comfortable with all of the stunts. On the day of the shoot, Hercules did not want to perform the stunt portrayed on the tape so the Amblin production team did not proceed with filming that shot.

Hercules is happy and healthy.

This hasn’t stopped animal lovers from flooding the film’s IMDB page with one-star reviews and negative comments in advance of its premiere in theatres on January 27.

Animal rights group PETA has also called for a boycott on the film, while also splicing finished footage next to the terrified dog during filming.

Director Lasse Hallstrom has responded on Twitter, writing that “I am very disturbed by the video released today from the set of my film A dog” and adding “I did not witness these actions. We were all committed to providing a loving and safe environment for all the animals in the film.”

I have been promised that a thorough investigation into this situation is underway and that any wrongdoing will be reported and punished.

I have been a lifelong animal lover and A DOG’S PURPOSE is my third film about dogs. The animals’ safety was of utmost priority.

Actor Josh Gad who voices the dog in the film has also released the following statement.