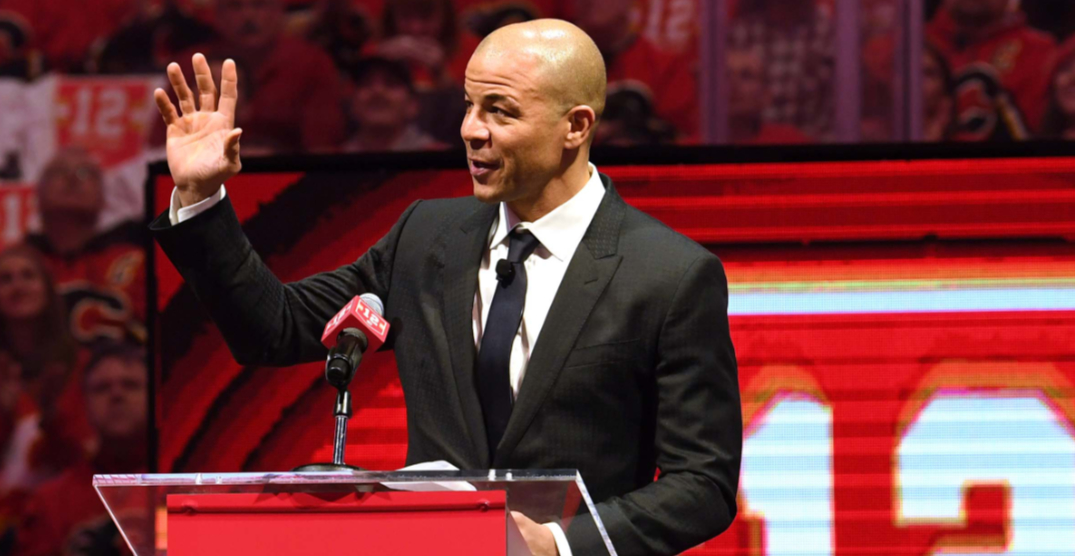 He’s got his number up in the rafters. On Monday, he’ll have his name in the Hall.

Iginla will be inducted into the Hall of Fame in the male player category along with Marian Hossa, Doug Wilson, and Kevin Lowe. Team Canada goaltending star Kim St. Pierre will enter via the female player category, and longtime NHL executive and current Edmonton Oilers general manager Ken Holland is going in as a builder category.

With all due respect to the others, Iginla is the headliner.

Iginla notched an even 1,300 points, including 615 goals, in 1,554 games in the NHL with the Flames, Pittsburgh Penguins, Boston Bruins, Colorado Avalanche, and Los Angeles Kings.

He’s got two Olympic gold medals to his credit, two Maurice Richard Trophies as the league’s leading goal-scorer on his mantle, and an Art Ross Trophy at home as the league’s scoring champion.

He’s deserving of the honour, no doubt.

And his Hall-of-Fame career was shaped by these chronological moments:

Iginla played an integral part of Canada’s first Olympic gold in men’s hockey since 1952, with two goals and one assist in the clincher. His latter tally bounced up and over Team USA goaltender Mike Ritcher and just over the goal line to give Canada a much-needed two-goal cushion with just 3:59 remaining in regulation before a 5-2 final. Iginla had been a late injury-replacement invite to Canada’s Olympic camp just six months prior.

Iginla hits the 50-goal plateau for the first time in his NHL career with a first-period goal against the Chicago Blackhawks, eventually finishing with the NHL lead in goals (52) and points (96) before earning the Lester B. Pearson (now Ted Lindsay) Award as the most outstanding player in the NHL as voted by his peers.

There was no milestone marker in Game 3 of the Stanley Cup Final for Iginla, but his game certainly left a mark. Iginla, captain of the Flames, and Vincent Lecvalier, captain of the opposing Tampa Bay Lightning, dropped the mitts in a heated, spirited tilt just minutes into the affair. It’s the most iconic of the power-forward’s 72 preseason, regular and playoff tussles.

“It wasn’t always about scoring,” teammate Craig Conroy told Postmedia in 2019. “He was going to do anything to change the tide. As we went along in those playoffs, that’s where he went from superstar to legend in Calgary.”

It’s simply referred to by two words: The Shift. A helmet-less Iginla, lost in a physical confrontation with a member of the Lightning, battling all over the ice with a foreshadowing purpose, and uncorking a howitzer that leads to teammate Oleg Saprykin’s overtime game-winner in Game 5 of the Stanley Cup Final. It’s the ultimate summation of Iginla.

96 seconds of vintage Jarome Iginla known as "The Shift" in Game 5 of the 2004 Stanley Cup Final. 👏 pic.twitter.com/fm35QHoij2

Prior to Trevor Linden’s last twirl at Rogers Arena — a 7-1 season-finale loss — Iginla made sure that he and his team gave proper acknowledgement to one of the most iconic players in Vancouver Canucks history. Linden was wrapping a 19-season career that included 1,140 games with Vancouver.

“I think it was a very classy thing to do. I think Jarome is one of the most classy players in the league,” Linden told reporters. “Not only that, he’s probably the best player in the league. ”

An Olympic game-winner came off Iginla’s stick in 2002. Only seems fitting Iginla would return the favour and set up someone else for a golden goal in 2010. Fishing the puck out of the corner in an intense overtime period, an audible “Iggy” can be heard before Iginla centers a pass to Sidney Crosby. The rest, to Team USA goaltender Ryan Miller’s chagrin, is history.

Where were you when Sidney Crosby scored for #TeamCanada to defeat the 🇺🇸?

Streaking down the wing, lifting his leg and ripping a snapshot by a shrugging goaltender. Patented Iginla. And the source of Iginla’s 1000th NHL point, coming in a 3-2 win against the St. Louis Blues. Fittingly, the late-season tally was a game-winner, too.

“I still want to play a lot longer but I’ve definitely been fortunate so far to play with as many good players and have the opportunity,” Iginla said, according to NHL.com. “It just makes me think back and I definitely feel blessed and fortunate.”

It’s not the typical “single-leg-kick wrister screaming down the wing,” but Iginla’s 500th goal will count all the same. He became the 42nd player in NHL history to reach 500 goals when his centering pass hit a pair of Minnesota Wild defenders and careened into the back of the net. At the point of Iginla’s roof-raiser, only 15 players had scored their first 500 with one team.

“It’s something I’ve been very blessed in hockey to have some great moments and memories that will stick with me,” Iginla said. “I’ve been part of different games and scoring some goals but that’s one that I’ll remember. When you start out you don’t really think, ‘get to 500’ or whatever, you just play. Along the way you just keep going. I definitely have to pinch myself. You don’t stop too often to look at things.”

Now a member of the Colorado Avalanche, Iginla became the 19th player in NHL history to score 600 goals during a power play at 13:20 of the third period in a 4-1 win against the Los Angeles Kings. Much like his 500th, Iginla banks a centering pass off a defender and in to celebrate the milestone.

“To score that many, it’s a little bit surreal. When I started, I didn’t think I would get to 600 or 500,” Iginla said, according to NHL.com. “You just play and you want to be in the League. You want to win and you want to be a part of the NHL. As each year goes by you just keep going, keep battling, and time flies. I never would have guessed this. It’s pretty neat.”

Iginla, at age 41, announces his retirement in a press conference with the Flames, finishing his NHL career with 625 goals — 17th-most in NHL history. His 1,300 points registers at 36th all-time, too.

“It’s an amazing job,” Iginla said. “I remember starting hockey at age 7 and going to my first tryout and dreaming about how great it would be, and it’s been even better. These 20 years in the NHL, it’s been better. I’m excited for retirement and to be with my family, but I’m going to miss all of you and all of this. So many great memories.”