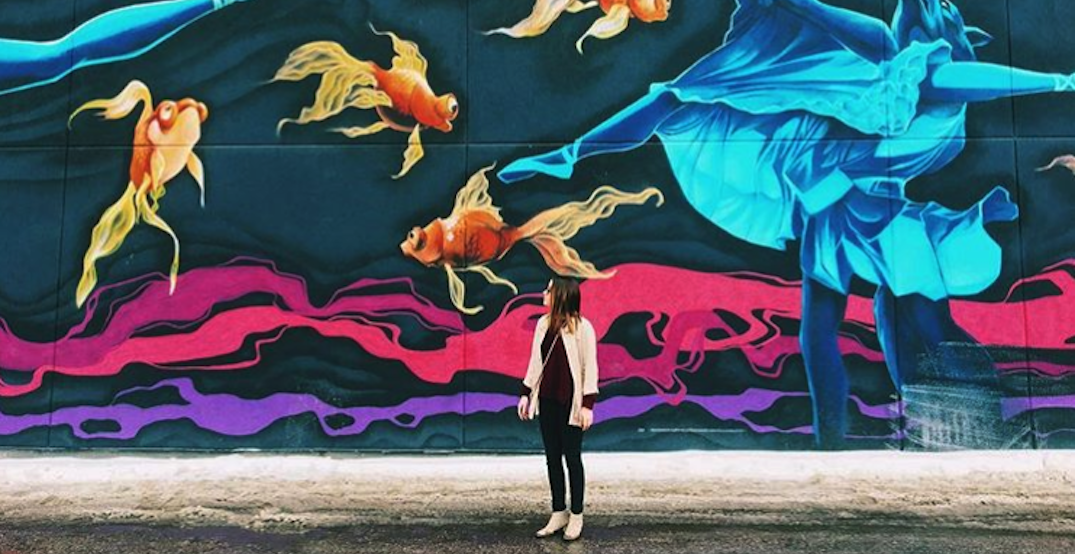 Instagram block is no different, but don’t fret, Calgarians. Our beautiful city is riddled with amazing Instagram spots when you’re feeling a little low on inspiration.

Here are a few suggestions for where you can go in YYC to make that feed look fabulous.

Though somewhat controversial when it was first pitched, the Peace Bridge pedestrian and bike path is a true architectural must-see. The Peace Bridge, designed by Spanish architect Santiago Calatrava, had its grand opening on March 24, 2012. Since then, Instagrammers flock to capture the perfect shot of this truly unique Calgary mainstay.

“Giving Wings to the Dream” Mural

This mural has become a popular background for Calgarians and it’s easy to see why. The mural, painted in 1995 by Doug Driediger, is one of most recognizable murals in the Calgary’s downtown core. Though visually stunning in its own right, Calgarians have come up with creative ways of framing their photos of the art, making it an essential stop on anyone’s Instagram tour of Calgary.

Where: Corner of 7th Avenue SW and 1st Street SE

This is a given, because how could Calgary’s most popular summer event be excluded from this list? From snapping photos of the Stampede food to interrupting the (sometimes aggressive) foot traffic to take a photo with the iconic Calgary Stampede sign, your options are limitless.

The Bow Building and Wonderland structure

The Bow building is a standout piece in Calgary’s city skyline and, quite frankly, Calgary wouldn’t be the same without it. If you plan on making a stop, you’re in luck because there’s a two-for-one special here. In front of the Bow building, there is the equally photogenic “Wonderland” structure made by Spanish sculptor Juame Plensa. An Instagram here would surely turn some heads.

With winter looming, Olympic Plaza is seeing an influx of attention on Instagram, especially nowadays due to the park opening its outdoor ice skating rink. The plaza, which was built for the 1988 Olympic Winter Games, offers ice skating until mid-March, so don’t miss your chance to capture this winter wonderland.

When you want to get a bird’s eye view of Calgary’s concrete jungle, look no further than the Calgary Tower. The tower celebrated its 51st anniversary this year, so what better time to visit this iconic Calgary staple than the present? From the observation deck you can feast your eyes on a 360° view of everything Calgary has to offer.

Located outside Bankers Hall, these sculptures are more than what meets the eye. The trees were actually installed in 2000 to reduce wind gusts on that block. Equally functional and visual appealing, the Galleria Trees are an integral part in the Stephen Avenue experience.

Where: Between 2nd and 3rd Street on Stephen Avenue

If you want to capture the sheer vastness of Calgary’s downtown, Scotsman Hill will give you the vantage point to do it. What’s unique about this view is that you can hit the perfect angle of the Scotiabank Saddledome and Stampede grounds while also getting Calgary’s skyline as your backdrop. Pro-tip: It is also a great spot to watch the Calgary Stampede fireworks.

Last but certainly not least, the Calgary Central Library is the newest addition to the growing list of Calgary’s Instagram-worthy places. Though the library just opened on November 1, the aesthetically pleasing natural wood architecture has already won over the hearts of Calgarians and Instagrammers alike.