On August 16th, 3 teams driving futuristic electric vehicles embarked on a ’round the world road trip to demonstrate that you don’t “really” need gasoline to get you from point A to B and back.

Starting in Geneva, Switzerland and going east through Europe, Russia, Kazakhstan and into China, the Zero Emissions Race pulled into our fair city, yesterday on their way down the coast to Los Angeles where they hang a left to burn past Las Vegas on the way south to sunny Cancun where the teams will stop in to the World Climate Change Conference before zipping back to Geneva to complete the 30 thousand kilometer trip on January 22nd, 2011.

Led by Louis Palmer, (who some of you may remember when he visited us back in 2008 on his epic 54 thousand kilometer Solar Taxi tour) the Zero Racers have set aside a few days here to show off their unique electric vehicles and to talk about their adventures. Yesterday, the Racers visited SFU, where they presented a report of the first half of the trip and they will also present a talk at UBC, tomorrow, Thursday the 11th at 530 PM in r00m 303 of the Frank Forward Building. Admission is free. And if you can’t get enough of the EV action, Come on down Friday the 12th between 9 AM and 11 AM to check out the vehicles themselves at the Quick Charge station at the South East False Creek Plaza (The one with the giant birds, yo). 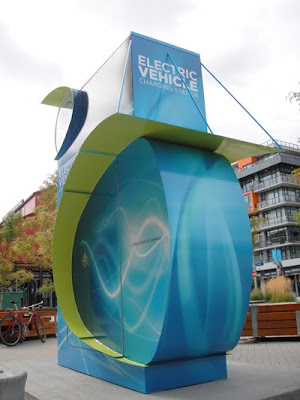