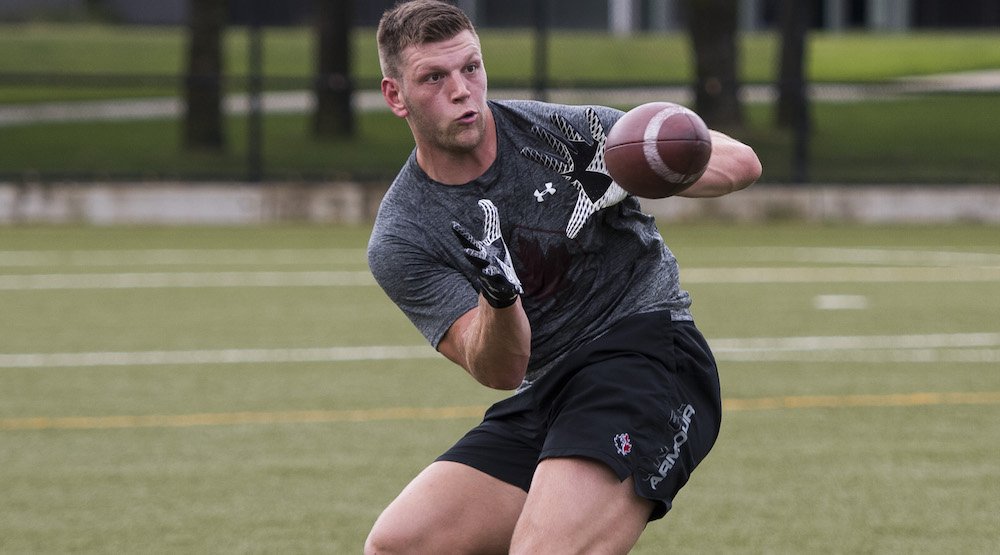 Playing for Canada at the Paris stop on the World Rugby Sevens Series last year, Adam Zaruba made a catch against Wales that went viral.

The catch drew comparisons to Odell Beckham Jr., leading some to wonder if the Vancouver native could transfer his skills from the rugby pitch to the football field.

And it looks like Zaruba is going to give it a shot.

“I just was contacted to see if I was interested in playing some football,” Zaruba said. “I thought it might be a good idea to just pursue some options and see what comes of it. So I’m just kind of out there, catching some balls, getting some footage and seeing what comes of it.”

Zaruba is no stranger to the sport of football, playing gridiron in high school and briefly at SFU.

At age 26, he’s too old to go back to playing university ball. Instead, Zaruba has his eyes on professional football, perhaps even in the NFL.

The 6-foot-5, 260-pound rugby player has the size to be a tight end in the American game.

“The first thing that stuck out to me was his hands. He catches everything,” said O’Connor. “His route running too. It’s good. It’s real good. This is the first time he’s been out in four years. Give it a couple of months and his improvement will be really good.”

While making the leap to the NFL may seem farfetched, he is garnering interest from teams on both sides of the border.

Zaruba often plays the wing in sevens, meaning foot-speed should be an asset for him. He feels he could run the 40-yard dash in the ‘high four-fives.’

The rugby star plans to continue working out with O’Connor as the summer goes on, keeping his options open during the rugby sevens offseason.