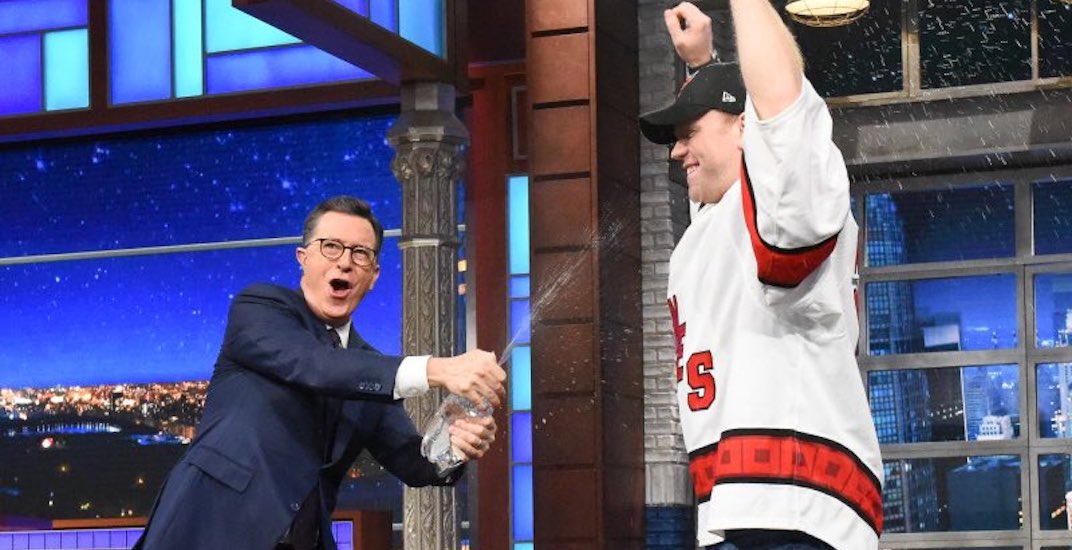 The last few days have been a whirlwind for David Ayres, the 42-year-old former Zamboni driver who got to play goal in an NHL game.

Not only did Ayres play, he stopped all eight shots he faced in the third period and registered the win in a 6-3 triumph by the Carolina Hurricanes. As if that wasn’t good enough, the win came on Saturday night during the feature game on Hockey Night in Canada in the centre of the hockey universe against the Toronto Maple Leafs.

Talk about a dream come true.

It was a huge win for the Canes, who are fighting for a playoff spot in the hyper-competitive Eastern Conference.

Where were you the night Dave Ayres grabbed his first NHL win!? pic.twitter.com/Lpb4HoZdTC

"I told the boys in the dressing room once we come out for the third I'll be settled down and ready to win this one."

Receiving a hero’s welcome from Hurricanes players in the dressing room afterwards, there’s so much to love about this happy-go-lucky guy.

I am the happiest, proudest woman on the planet because my human got to live out his ultimate dream.
…I’m also surprised I still have a voice. https://t.co/qTglhZypG5

Then there’s the fact that he had to overcome a kidney transplant in 2004.

Ayres is getting the experience of a lifetime this week. The Whitby, Ontario, native travelled to New York City on Monday, conducting an impressive media tour that included interviews with the following places:

Wearing his #90 Hurricanes jersey, Ayres also got to sit down with commissioner Gary Bettman at NHL headquarters, and went for a skate outside Rockefeller Center.

Speaking on The Today Show, Ayres was brought to tears after some beautiful words from his mother Mary, who was also his kidney donor.

“Zamboni goalie” David Ayres was brought to tears by his mom on the @todayshow ❤️ . 🎥: @todayshow #dailyhiveoffside

Then on The Late Show, Ayres helped Stephen Colbert finish his monologue:

Ayres fills in for Colbert pic.twitter.com/cOP3pHdQDY

Ayres has been named an honorary North Carolinian by the state governor.

David Ayres had so many astonished North Carolinians, including me, yelling with glee at their televisions Saturday night that we had to officially make him one of us. – RC pic.twitter.com/Sa7VDPLypj

Meanwhile, the Mayor of Raleigh has proclaimed Tuesday to be “David Ayres Day.”

The City will be honoring him with a formal proclamation, naming Tuesday “DAVID AYRES DAY” in Raleigh. I’m sorry I can’t be there to present it but I’m thrilled that @Canes fans will have the opportunity to share this joy. #livingthedream https://t.co/ukk9l3VHa6

Ayres will be present at Tuesday’s Hurricanes home game, signing autographs and sounding the siren before the game.

The team is even selling #90 Ayres T-shirts, with a portion of proceeds benefitting the National Kidney Foundation.

Ayres shirts are available online and in-store, and a portion of proceeds will benefit the @nkf!

Also benefitting the National Kidney Foundation will be sales from Storm Brew beer at the game.

Clearly Ayres is the hero we didn’t know we needed.

David Ayres took the world by storm this week, one appearance at a time. 👏 pic.twitter.com/QhnQR5NytL