The Yuk Yuk’s International Stand Up Comedy may just be what the doctor ordered if you’re seeking out to make 2013 the best year yet. Why not give yourself a boost of endorphins to prompt you on your way to a happy New Year and a happy new you with some facial excercises. Work out those abs while laughing hysterically while enjoying drinks with your friends in a cozy darkened room. A skeptic? Yuk Yuk’s International Comedy guarantees laughter, and you’ll probably get more than you asked for.

Every Week, Wednesday through Thursday, a different stand up comedian takes the stage. Shows usually start at 8:00 PM and 10:00 PM for a duration of about 2 hours.

Yuk Yuk’s International Stand Up Comedy is a chain created by Mark Breslin:

In 1976, Breslin opened the first Yuk Yuk’s, in the basement of Toronto’s Church Street Community Centre. Four years and many sweaty shows later, the Yuk Yuk’s flag ship was moved to 1280 Bay Street in the trendy Yorkville district. Over the next decade, Yuk Yuk’s would expand to its present reach with over 15 clubs across Canada.

More information on Mark Breslin and Yuk Yuk’s beginnings can be found on their website.

I had the pleasure of watching Rob Pue take the stage several weeks ago. Rob’s charming and witty performances skillfully engage the audience into fits of laughter. His candid and humorous take on his own personal experiences, society, family life, and even tragedy, makes his acts not only incredibly funny, but also sympathetic. It’s no question why he won the much acclaimed 28th annual San Francisco Comedy Competition 2003. Rob currently tours for Yuk Yuk’s International Comedy, so be sure to keep an eye out for when he returns to Vancouver. 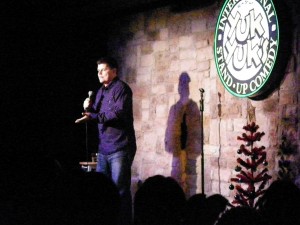 All the comedians who perform at Yuk Yuk’s International Stand Up Comedy Club are guaranteed to make you laugh. My experience was terrific, and the ambiance of the dark room made me feel very cozy and safe to relax and enjoy the very therapeutic act of laughing. I was still laughing like a crazy hyena while on the skytrain, after remembering one of Rob’s jokes. So if you want to wondrous night of drinks, comfort, and  laughter, come on down to Yuk Yuk’s International Stand Up Comedy Club. You’re going to laugh, they guarantee it.

When:  Various, check website for exact dates and times, typically Wednesday through Saturday, 8:00 PM and 10:00 PM

How: Purchase tickets online here, tickets can also be purchased at the door