The City of Vancouver gets good marks from residents on specific competencies, but is clearly not connecting well with the public on others, a new Insights West survey has found.

In the online survey of a representative city sample, residents were asked to rate the performance of the municipal government on 12 different issues.

The City of Vancouver had its best numbers on promoting tourism to Vancouver (79% deem its efforts “very good” or “good”), providing good sanitation services (75%), protecting the environment (70%) and fostering artistic and cultural activities (69%).

A majority of Vancouverites also think the city has done a good job dealing with crime (62%) and enhancing their overall quality of life (55%). Smaller proportions of residents are satisfied with the way Vancouver is managing development and growth (47%), handling the city’s finances (39%) and dealing with transportation (37%).

Only a third of residents believe the city is doing a “very good” or “good” job engaging with people like them (33%), and fewer are content with the way it is dealing with homelessness and poverty (31%) and making City Hall work in a transparent and unbiased fashion (25%). 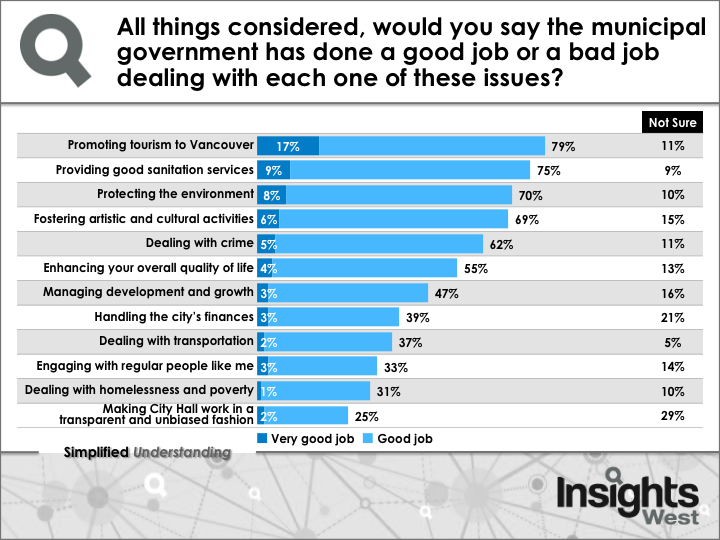 Housing (39%) remains the most important issue for residents, followed by transportation (16%), poverty (12%) and economic development (9%).

The approval rating for Mayor Gregor Robertson of Vision Vancouver stands at 46 per cent, with 40 per cent of Vancouverites disapproving of his performance. The groups that are satisfied the most with Robertson’s performance are women (52%) and residents aged 18-to-34 (55%).

“As we head into the municipal election, the age of would-be voters is a key factor for the governing party,” said Mario Canseco, Vice President, Public Affairs, at Insights West. “Almost half of residents aged 18-to-34 regard housing as the most pressing concern, and they voice the highest level of support for the re-election of the incumbent mayor.”

Two age groups react differently to the main contenders. Residents aged 18-to-34 are definitely more likely to support Robertson (34%) than LaPointe (8%). Conversely, most residents aged 55 and over (59%) say they are unlikely to vote for Robertson this year, and 38 per cent of them would probably cast a ballot for LaPointe.

On the race for City Council, a third of Vancouverites (34%) say they are likely to give at least one of their votes to candidates from Vision Vancouver. The Non-Partisan Association (NPA) is next on this list with 30 per cent, followed by the Green Party of Vancouver with 29 per cent, and the Coalition of Progressive Electors (COPE) with 18 per cent.

Less than one-in-ten residents are currently considering voting for council candidates representing the Cedar Party (8%) and One City (7%).