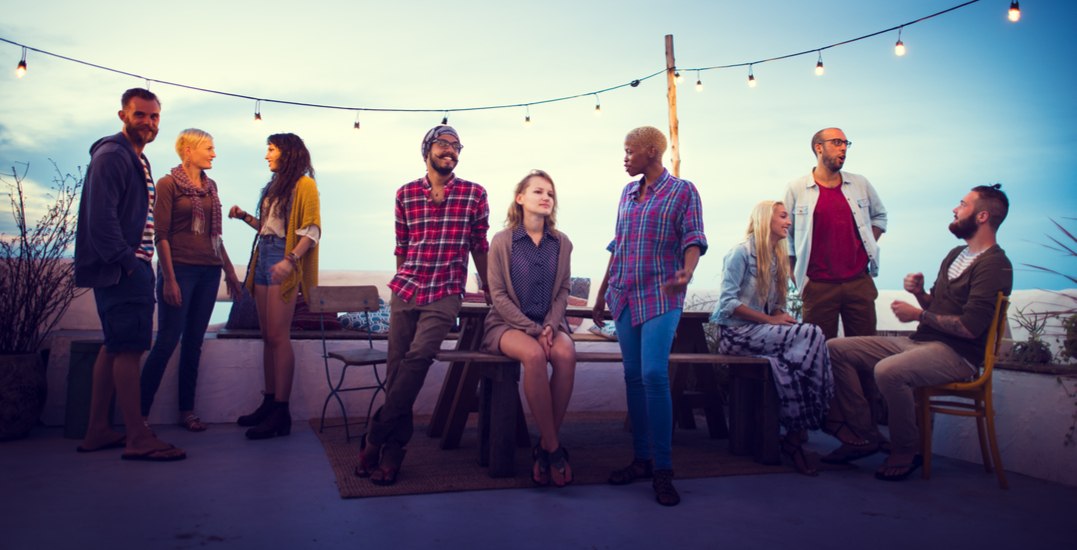 Just over one in seven Canadians born between 1993 and 1988 were considered NEET by Statistics Canada in the past year.

NEET, or Not in Employment, Education, or Training, has been a stat monitored by Statistics Canada since 1998 — and before you get all uppity about how “Millennials are lazy and don’t want to work” — it should be noted that the 15% NEET rate seen in 2018 is actually the lowest it has ever been recorded for Canada.

Even with approximately 376,000 young Canadians both out of the workforce and not actively improving their skills through education or training, the NEET rate is 4% lower than when records began in 1998 (when those who are now aged 45 to 49 were looked at during their time as young adults).

Canada’s current rate is also 3% lower than that of the combined member countries of the  Organisation for Economic Co-operation and Development. 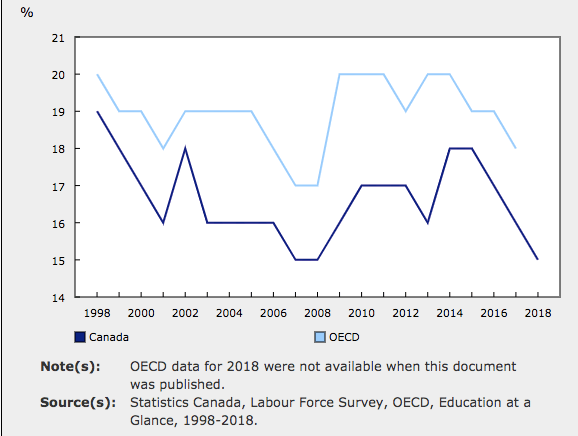 Not in employment, education or training (NEET) rates for 25 to 29-year-olds, Canada and Organisation for Economic Co-operation and Development (OECD), 1998 to 2018 (Stats Canada)

A study titled “The transition from school to work – the NEET (not in employment, education or training) indicator for 25- to 29-year-old women and men in Canada” found that two-thirds of the 376,000 NEET Canadians were not looking for work, while the other third were actively seeking employment.

There are many reasons why a young Canadian would become NEET, with one out of ten reporting that they are permanently unable to work due to health or disability reasons. The responsibility of caring for children could also be a cause of why young Canadians would be out of school and unemployed.

“Young women aged 25 to 29 with children were more than four times more likely than young women without children to be out of the labour market,” the study found. It was also noted in the study “Fertility Rates and Labour Force Participation Among Women in Quebec and Ontario” that policies in Quebec that lowered the price of child care resulted in more women entering and staying in the labour market.

It was also stated in the study that NEET Canadians were more likely to have NEET spouses, and that level of education weighed heavily into the possibility of a young Canadian finding themselves in a NEET situation. 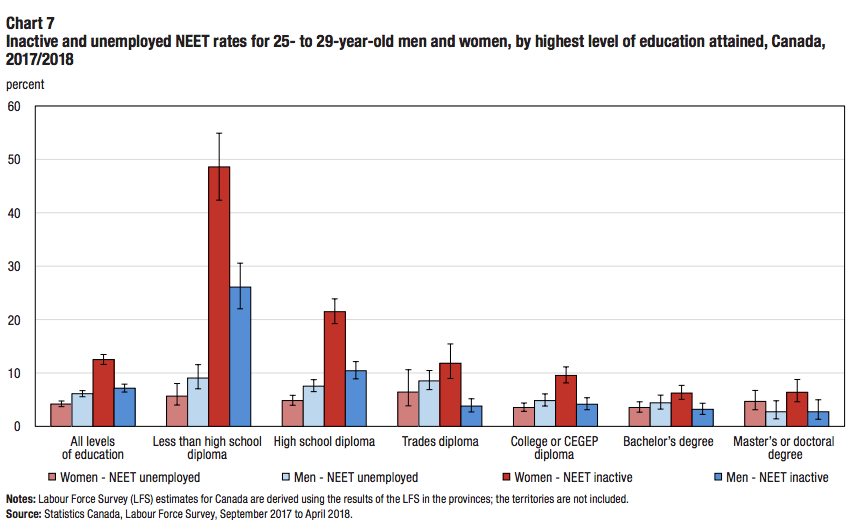 Inactive and unemployed NEET rates for 25- to 29-year-old men and women, by highest level of education attained, Canada, 2017/2018 (Stats Canada)

But then again, who does?