Yero is a nightlife network that lets you connect with people in nearby clubs, colleges and festivals. The location-based app shows you people and venues around you and automatically displays users in the same club, college or festival at the top. No need to check-in or connect to any WiFi networks—just walk inside.

Despite being designed for clubs, colleges and festivals, you can use Yero from anywhere. Open the app any time after 5 p.m and you’ll be asked to join your city’s network. Once you join, you’re connected to your city’s network and any venue network you walk into until 5 a.m the next day.

“One of the things that didn’t make sense to us was having our users remain online forever. There will be nights where you don’t want to be discovered and nights where you just aren’t in the mood to meet people. If you want to meet people in the comfort of your pajamas, there’s Tinder. We’re not trying to be another Tinder—we’re trying to connect people out tonight,” says Matthew Greig, CEO & Co-Founder of Yero.

When you see someone you’d like to connect with, send a whisper to get their attention. If they want to connect with you, Yero lets you add each other on Snapchat, Line or WeChat. 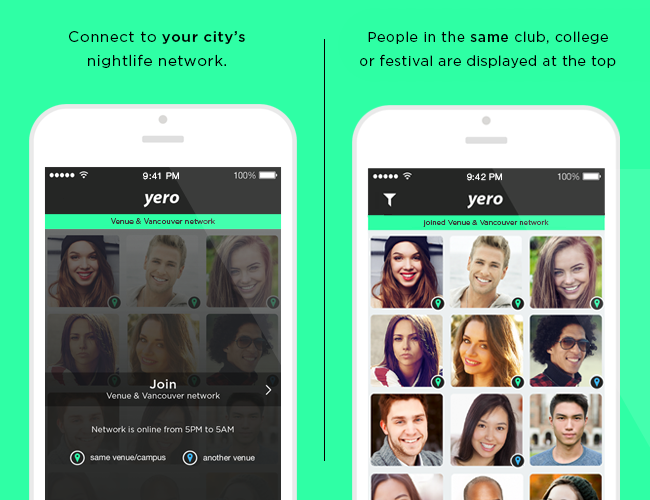 When you decide to join a venue network, you’ll be able to connect with other users inside until you leave or when the clock hits 5 a.m. With user security in mind, only people in the same venue will actually know which venue you’re in—others will only be able to see that you’re in a venue without knowing the venue’s name. Also, since users can be nearby each other, Yero took extra steps to ensure user privacy and security by keeping everyone’s name and age hidden until a connection is made. 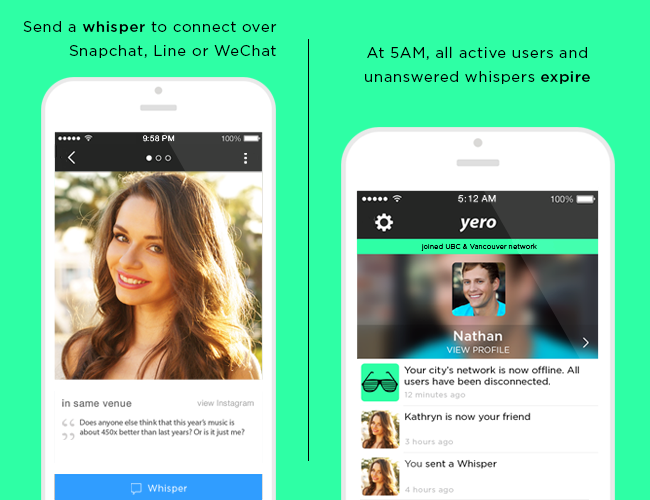 Like Snapchat, Yero is designed to be ephemeral. Joining a network and sending whispers expire at 5 a.m every morning. “I really like the self-destructing nature of Snapchat. The concept of ‘here-now, gone-later’ fits perfectly for an app trying to connect people in the moment. If I’m at a club or festival tonight, I probably won’t be there tomorrow,” says Matthew.

For these reasons, Yero decided to skip chatting altogether and connect users with Snapchat, Line and WeChat. “We’re a startup and startups have limited resources. I didn’t want to build out a mediocre chatting experience only to have users say ‘Hey, add me on Snapchat’. Besides, I believe Snapchat is the best experience for people who just met—there are so many ways to break the ice.”

If you don’t have an iPhone, you’re currently out of luck. However, Yero is planning to support Android in the near future.

You can download the free app from the iOS App Store.