When asked to summarize how close the team was to being a legitimate Stanley Cup contender, Gillis remarked, “not close at all”. 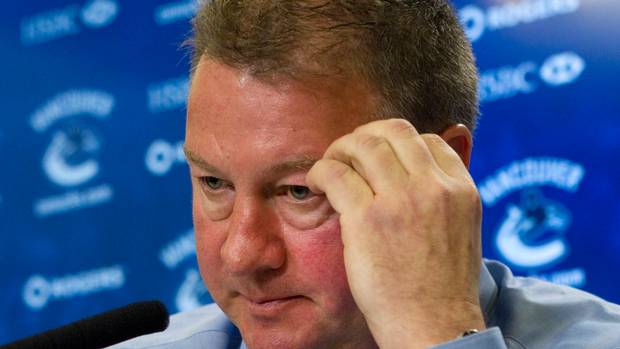 On May 23, 2014, Jim Benning took the organizational reins after a drama-filled, 12th place season that exposed the team as lacking depth, direction and order.

When asked to summarize the team’s outlook, Benning looked at nearly the same core Gillis had assessed six years earlier (albeit older and weaker) .

“I like our core players. I’m not gonna sit up here and promise any changes… I’m gonna get to know the rest of the guys and then we’ll make assessments”.

Both Gillis and Benning represented rookie general managers. Gillis, a well-spoken but often arrogant personality, approached the media with distrust and annoyance. Benning, a seemingly reluctant figurehead, countered with honesty and casual conversation.

Neither, necessarily, were right for the market.

After a catastrophic 2013-2014 season, Benning found similar success, pushing the Canucks to overachieve with a 2nd place finish in the Pacific Division.

But how does Benning’s first year stack up against that of his predecessor?

Despite the subsequent drama,  Hodgson’s pick (over the hyped, but unpredictable Kyle Beach) established Gillis’ desire for quality, character individuals to serve as the foundation for his tenure.

Not to mention, the draft produced Vancity Buzz’s favourite prospect of all time.

@TSN1040 @patersonjeff When is Prab Rai going in?

While the draft class’ success remains to be seen, Virtanen is currently ranked as the 31st best prospect in hockey, McCann projects as a two-way center (with Ryan Kesler-like qualities), and Demko projects as a starter with number-one potential.

In 2008, Gillis pried Steve Bernier from Buffalo in exchange for a 2nd and 3rd round pick, landed Lawrence Nycholat from Ottawa for Ryan Shannon, and added Shane O’Brien from Tampa Bay for Lucas Krajicek. Bernier would score 15 goals  and receive the team’s unsung hero award.  In 2010-2011, none of the players would remain.

In 2014,  Benning dealt disgruntled center Ryan Kesler to Anaheim for Luca Sbisa, Nick Bonino and a 1st round pick. While the return (which largely rests on the development of Jared McCann) left armchair general managers dissatisifed, significant credit should be afforded to Benning for the cultural implications. In dealing Kesler promptly, Benning exhibited a shrewd awareness of the market (and local media), preventing the saga from becoming a continuing, cancerous distraction (see Luongo/Schneider 2011-2013). Kesler’s no-trade-clause and two-team list were also significant factors.

Benning would also deal defenceman Jason Garrison (and four years of a $4.6M cap hit) to Tampa Bay for a 2nd round pick. While Gillis’ regime had high hopes for Garrison’s offensive upside, the blueliner never truly clicked in Vancouver. As a result, his bloated, long-term deal became a buyout target.

As noted by Jason Botchford, Garrison’s trade sent an important message that management’s adherence to no-trade-clauses was subject to poor play. In Vancouver, where NTCs had become a crippling norm, Benning’s stance was significant. 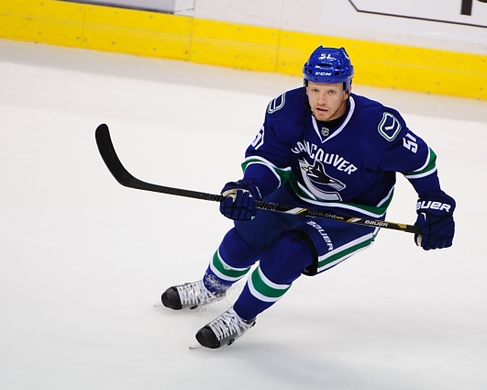 Finally, Benning would swap a 3rd round pick to New York for Derek Dorsett. In addition to establishing himself as a crucial part of Vancouver’s fourth line (notching 25 points and 175 penalty minutes), Dorsett was instrumental in the development of prized prospect Bo Horvat.

“Derek’s one of the guys that took me under his wing. He helped me on what it takes to stay here and what it takes to be a pro — things I should do and shouldn’t do. He was amazing to me ever since day one”.

In 2008, Gillis was active on the free agent market. Driven to rebuild the fourth line, Gillis inked Ryan Johnson (2 years/$2.3M) and Darcy Hordichuk to relatively low-risk, low-reward deals. In an excellent move, Gillis astutely plucked undersized centre Kyle Wellwood from the free agent pile (1 year/$998K). Wellwood would finish the season with 18 goals. Gillis’ signing of Pavol Demitra (2 years/$8M) was palatable after the 2008-09 season, in which Demitra would notch 20 goals and 33 assists.

While Gillis’ five month pursuit (and subsequent acquisition) of Mats Sundin demonstrated an unparalleled commitment to patience and logic, his initial offer (2 years/$20M, making Sundin the highest-paid-player in the NHL) was questionable, at best. So, too, was Gillis’ related vision of establishing Vancouver as a free agent destination (see: every subsequent non-BC born free agent). 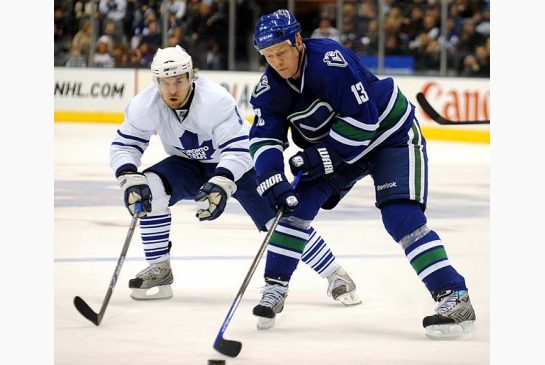 In 2014, Benning produced (arguably) the most polarizing free agent splash in franchise history.

The signing of Ryan Miller (3 years/$18M) angered many of the team’s followers, and committed a significant amount of cap space (mid-rebuild) to an aging veteran.

At the outset, Miller’s signing suggested a 3-5 year assembly-line in goal (Miller, Lack, Demko), mirroring Benning’s previous experience in Buffalo (Dominik Hasek, Martin Biron, Miller). While Miller’s numbers were adequate in 2014-15 (29-15-1, 2.53 GAA, .911 SV%), the impact of his cap-hit on the young roster continues to raise eyebrows.

Conversely, Benning should be lauded for the best signing of the 2014 free agent class, landing winger Radim Vrbata at 2 years/$10M. Vrbata would notch 31 goals, become an NHL All-Star, and receive the team’s Most Valuable Player award.

In 2008, Gillis extended the contracts of Alex Edler (4 years/$13M) and Alex Burrows (4 years/$8M). While neither signing could be fully appreciated at the end of the 2008-2009 season, both players would serve as integral pieces of the 2010-2011 roster. In addition, Burrows’ contract would represent one of the most team-friendly deals in recent memory.

While Tanev’s deal may have been slightly premature (buying out two years of restricted free agency), the 25-year-old defenceman represents a long-term staple of the team’s first pairing and an invaluable component of Alex Edler’s resurgence.

Dorsett would almost certainly be an intriguing target for 29 other teams in free agency, and Sbisa’s signing supports the old-school adage of “defencemen take longer to develop”. Nonetheless, the market’s response has been less than encouraging.

Ultimately, it’s unrealistic and shortsighted to judge Jim Benning’s tenure after one season on the job. With any plan to (effectively) rebuild a franchise, a general manager should be afforded (at least) three years before serious judgment is passed.

While Gillis improved the Canucks in 2008-09, his best moves took place 1-2 years later, following (patient) observation of the roster and a determination of needs. The same luxury should be afforded to Benning, particularly given the Canucks’ strides in 2014-2015.

In fact, Benning might deserve even more than three years.

Throughout (much of) his tenure, Gillis’ role necessitated core maintenance and peripheral additions, with an eye towards the Stanley Cup. In that sense, he was excellent. He gave the Canucks five great seasons.

But that logic doesn’t apply here. Jim Benning shouldn’t be expected to win a Stanley Cup any time soon. Rather, his reign should fundamentally shift the franchise’s direction for the next 10 years. He shouldn’t accentuate. He shouldn’t re-tool. He should rebuild. That requires time, patience and frustration.

After three seasons, Mike Gillis had the Canucks at the NHL’s forefront. After six seasons, the organization was in shambles.

Ideally, the inverse is true for Benning.