A Vancouver man, who’s hoping to transform himself from head-to-toe into a dragon, might have broken the Guinness World Record for longest tattoo session, after going under the needle for nearly 51 hours straight.

Josh Burns, also known as “Burns the Dragon,” wanted to break the world record for practical reasons. He’s a performer in what he calls “freak shows” and since he has plans to have every inch of his skin tattooed, it just made sense to have a marathon session – breaking a world record was just a plus.

“Pain is an issue, but I can get over pain – the world record just helps boost the career,” Burns told Vancity Buzz.

Burns is no stranger to pain, either. He’s had his tongue split, his ears pointed and ridged along the lobe, and his eyes “tattooed” so they appear all black (that involved a syringe and some ink – you can use your imagination for the rest).

Burns also has two silicone implants inserted under the skin of his forehead to look like horns, although he was missing one at the time of the interview after a glass mishap on stage caused one to pop out. 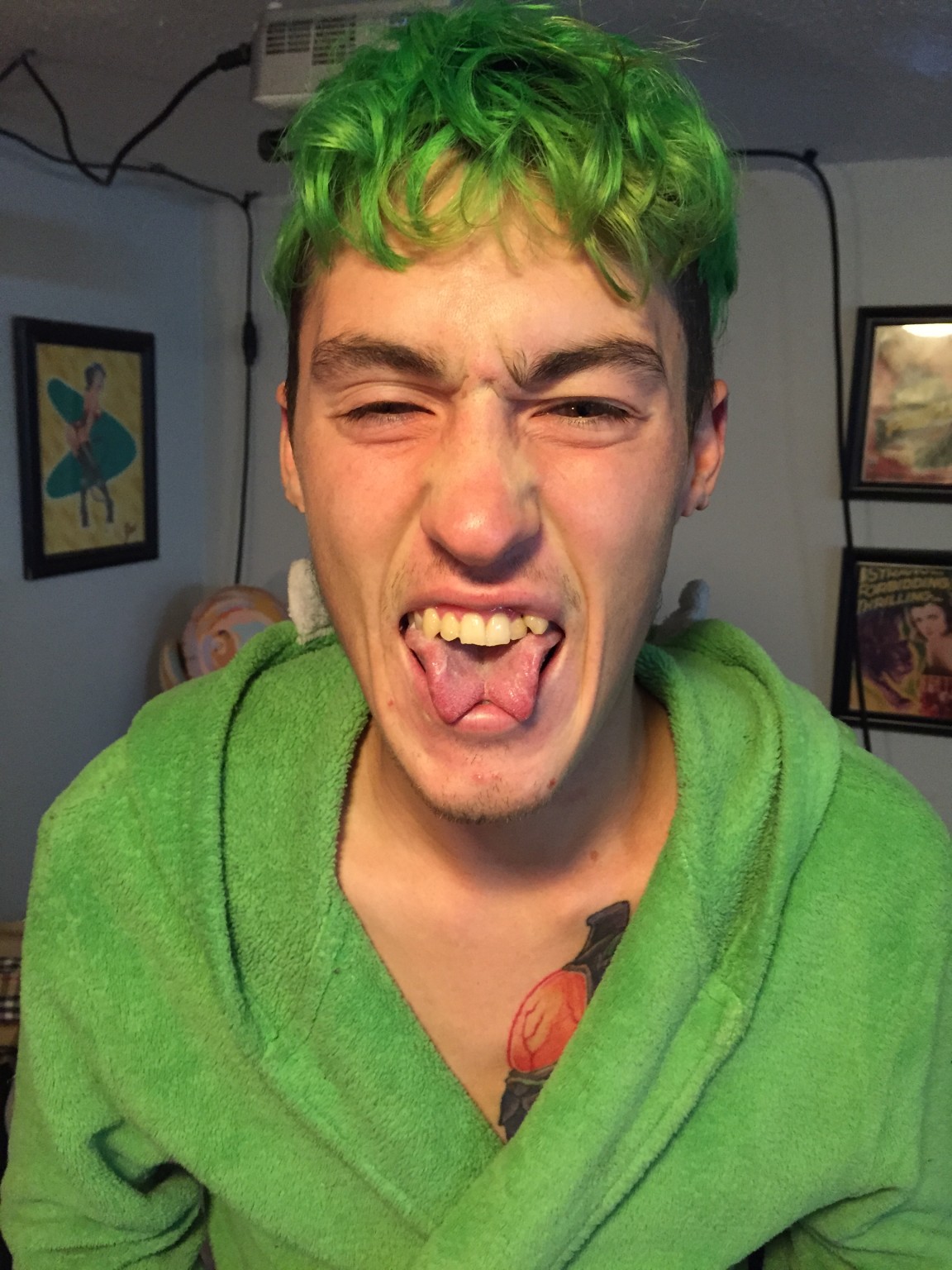 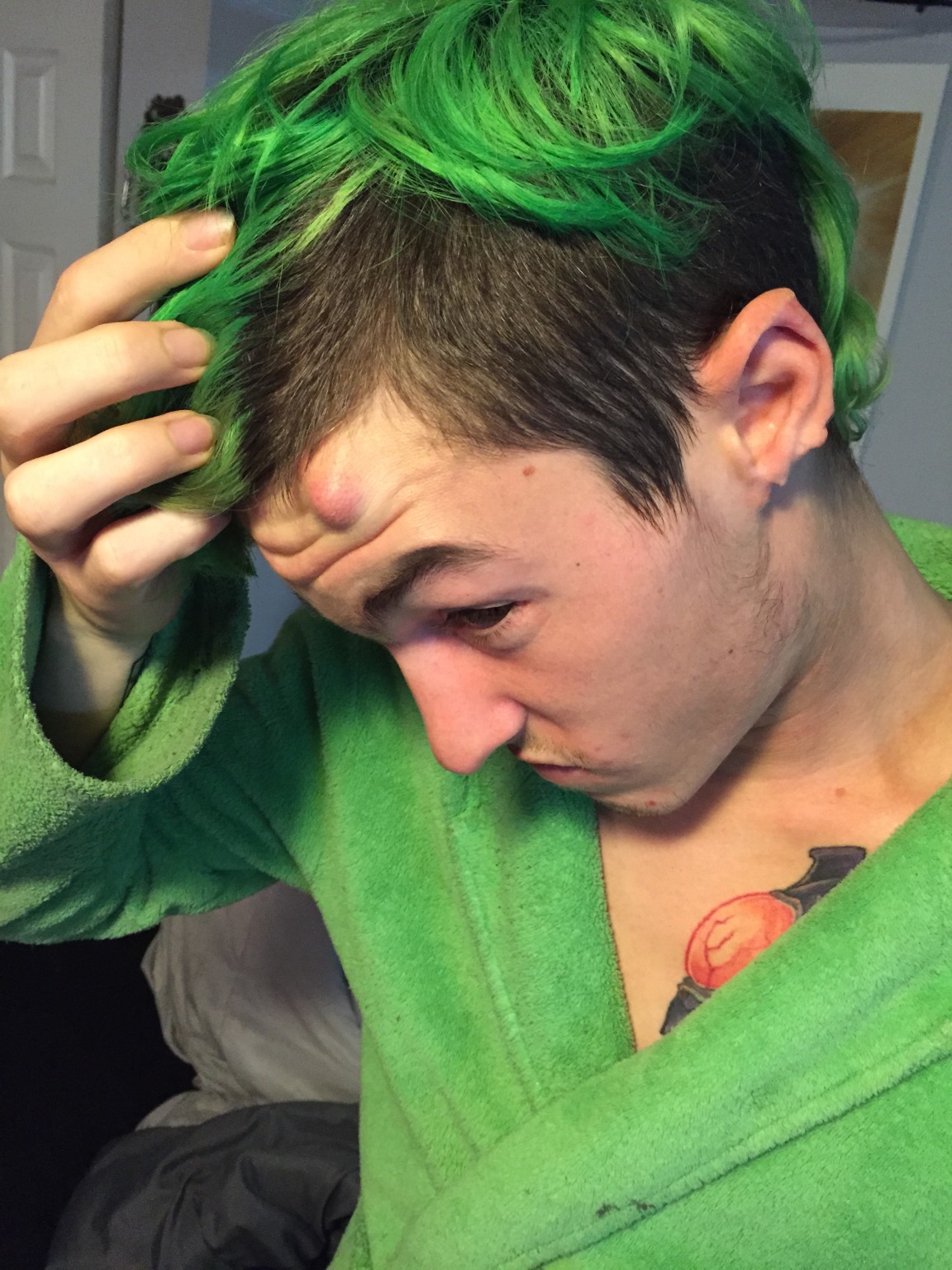 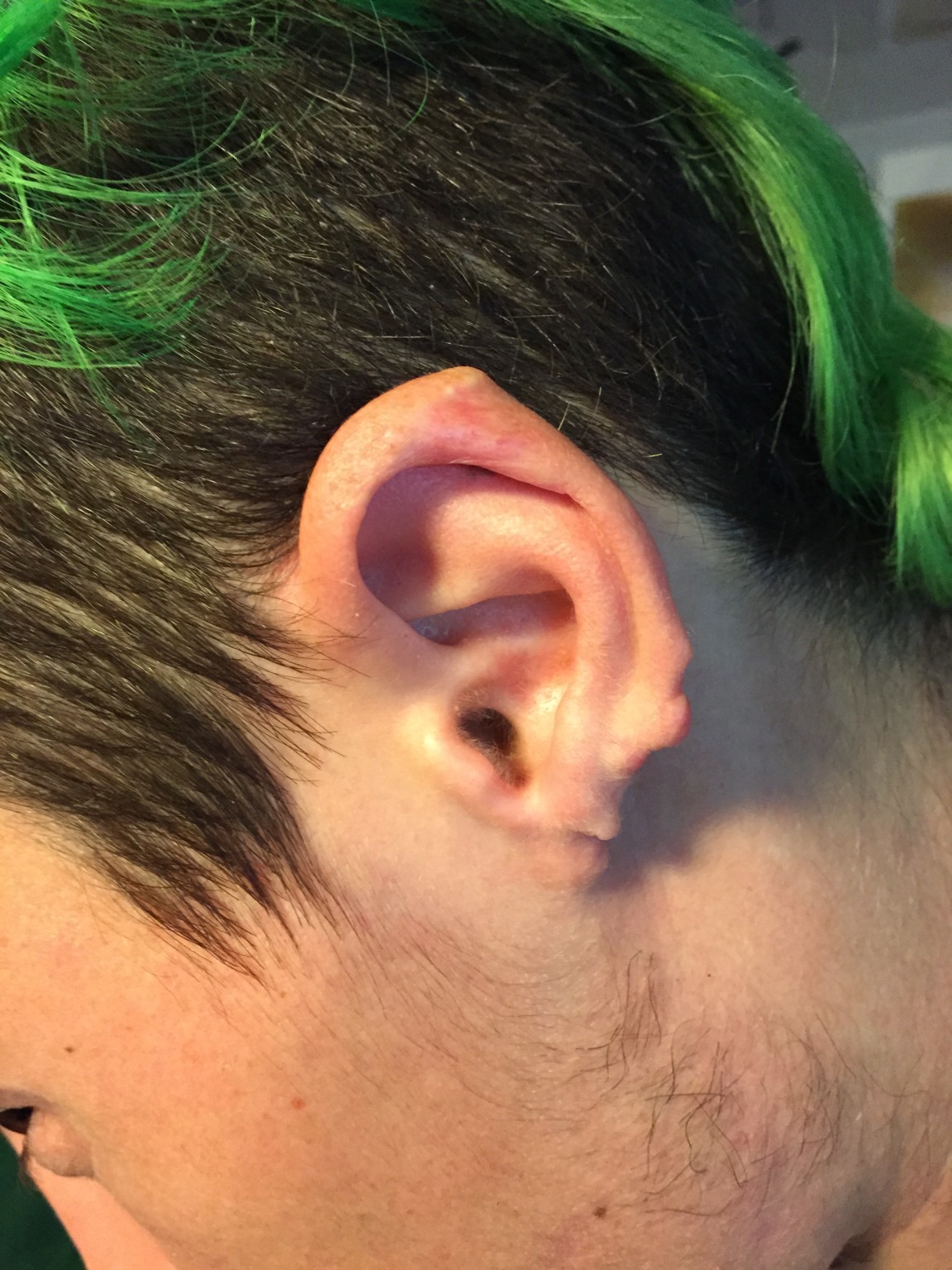 For Burns’ part, he was confident that he could withstand getting tattooed long enough to beat the old record – which was 50 hours and 10 minutes – but he had his moments of doubt.

The tattoo extends across and down Burns’s back, all the way down to his right leg and right arm.

Before it could all become a reality, though, Burns had to get in touch with the right tattoo artist fit for the job – no small feat considering the time commitment required, Burns’s high standards for the quality of the tattoo, and the fact that it’d need to be done pro-bono. He already had one artist bail on him, and he needed someone he could rely on.

Thankfully, Burns was in luck.

He and a tattoo artist from Alberta named Brandon Fancie connected over Facebook just two weeks before the session was scheduled to take place. They started emailing back and forth and decided to meet in Vancouver. The pair met for half an hour and agreed on embarking on the record-breaking journey together.

Fancie told Vancity Buzz he wanted a way to get his name out there and to publicize his work, but it turned out to be a much more arduous task than he had thought – and his body started retaliating against him.

“Around hour 45 my feet and ankles started swelling up and it got pretty painful near the end. There was no circulation from sitting and standing for so long,” Fancie said.

“By the time I walked back to my hotel room, I was literally crawling around my room.” 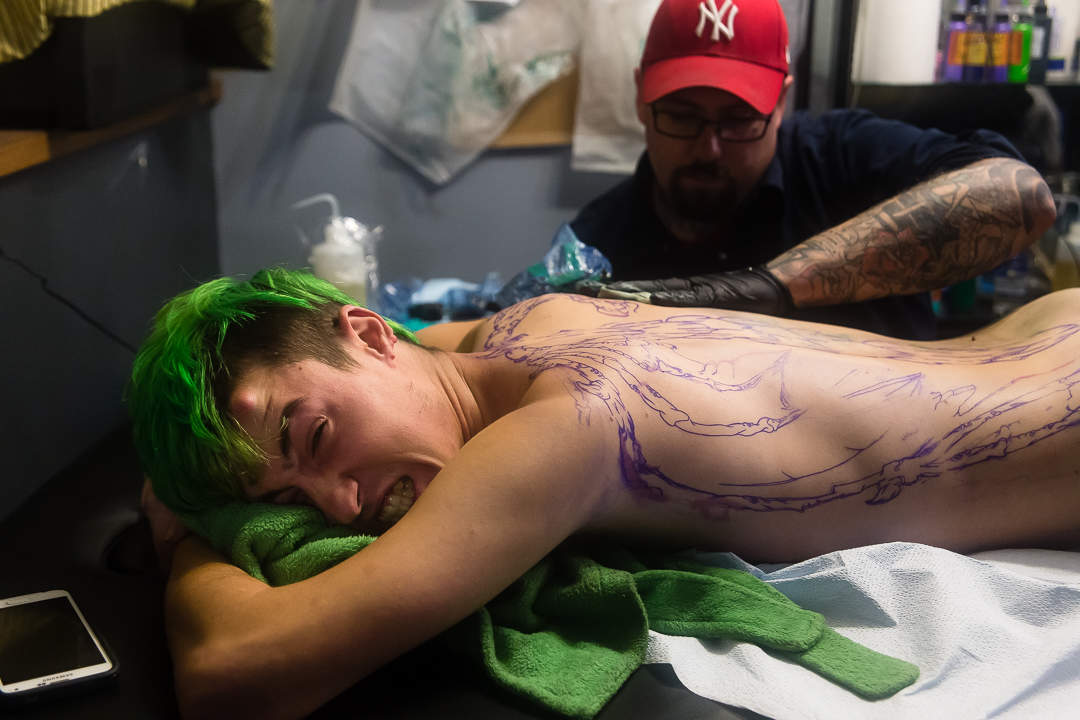 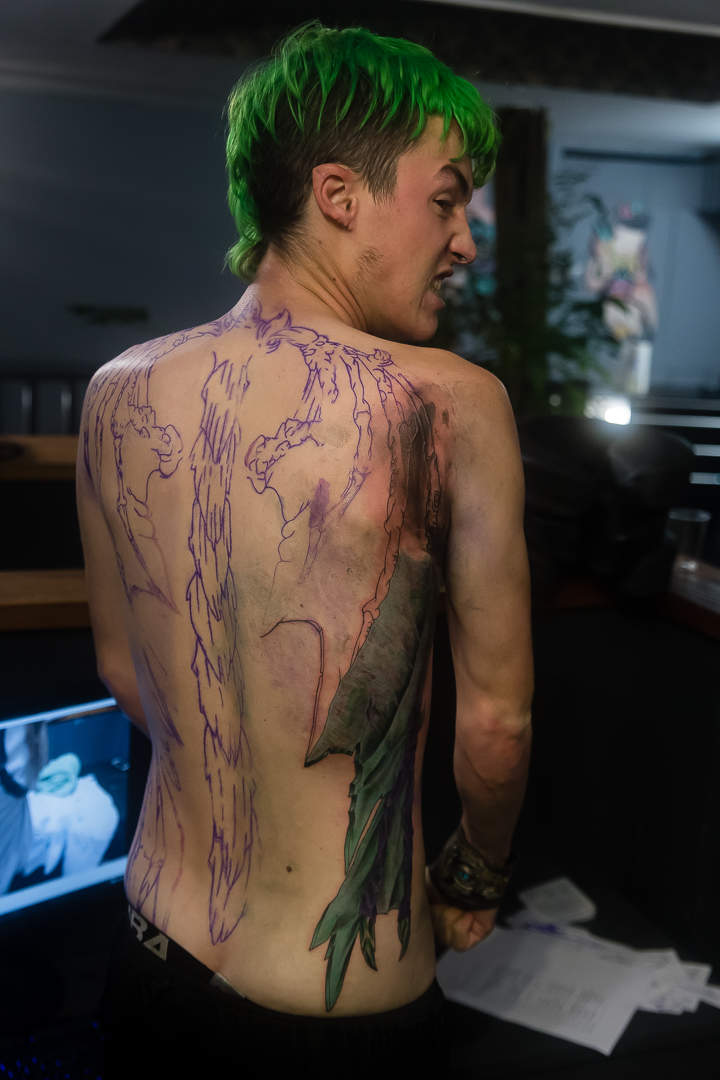 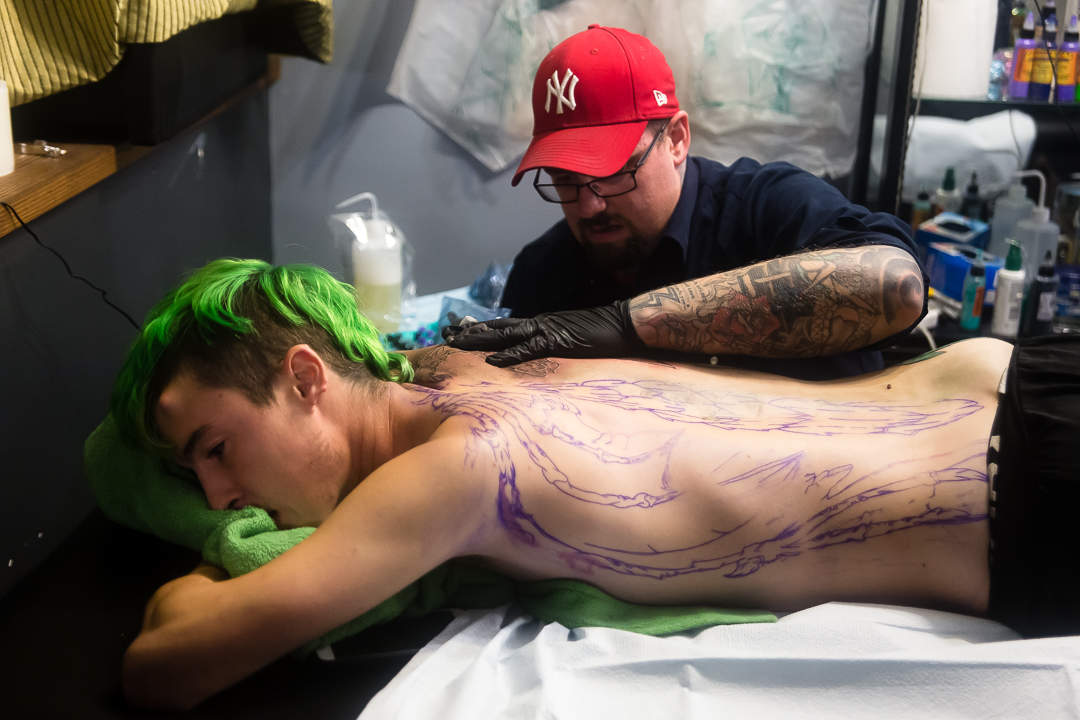 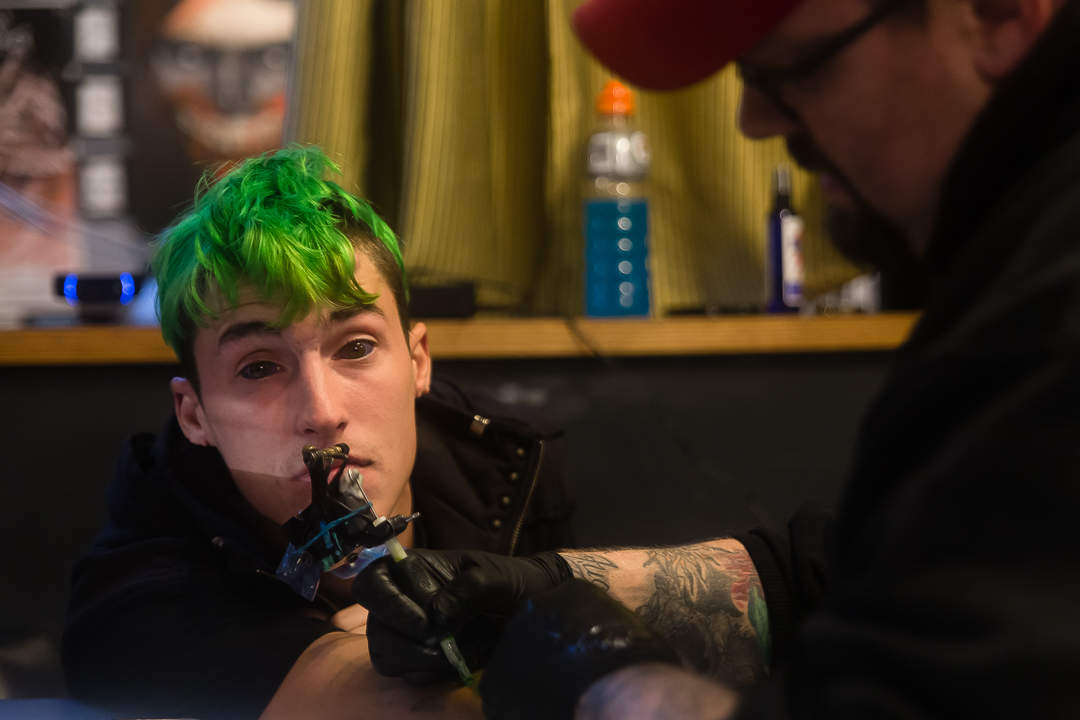 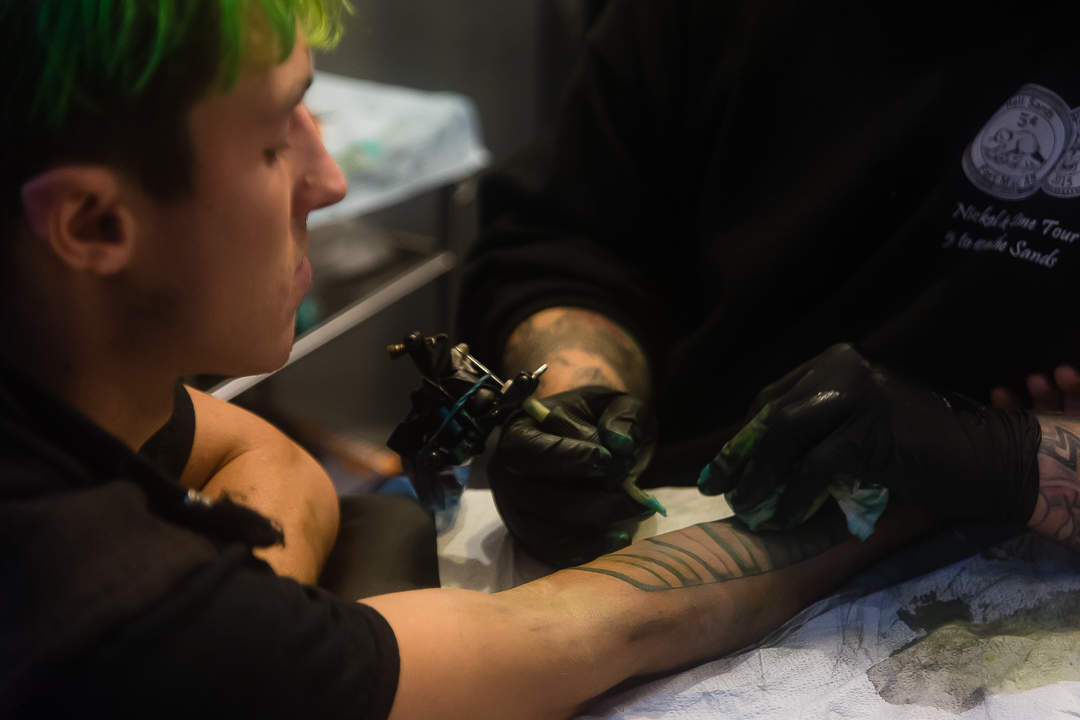 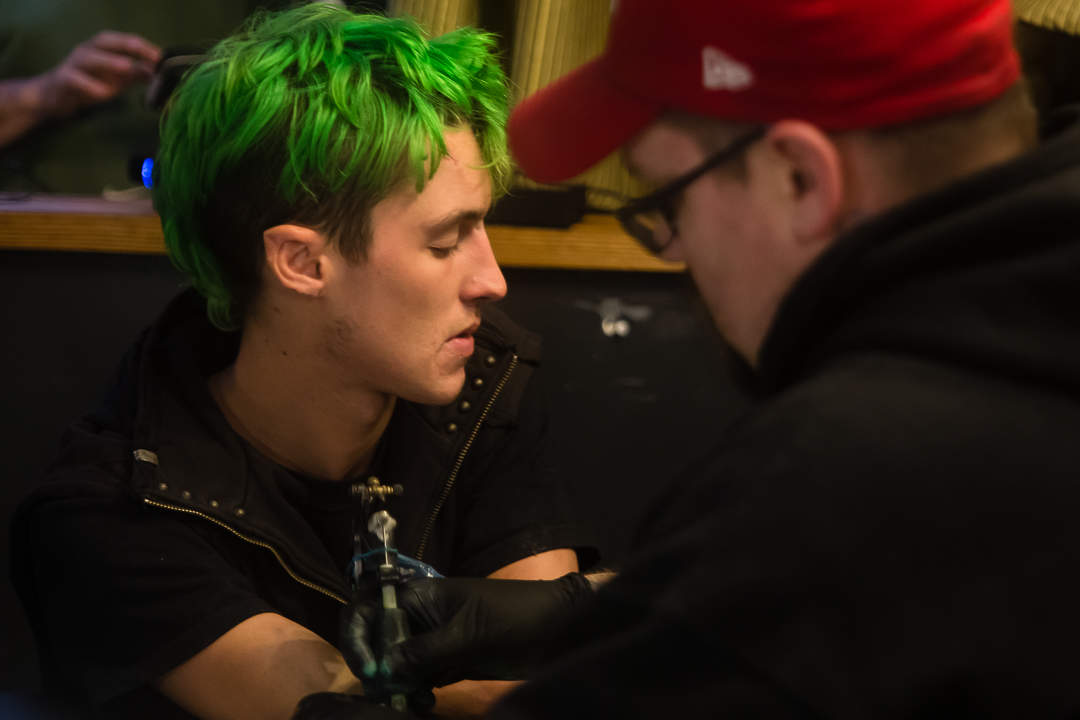 Of course, bathroom breaks are a necessity in situations like these, so the team was granted five minute breaks every hour to snack and use the washroom. If they wanted to take an extended break, however, the team could bank their five minute breaks to use how they please. For example, working 10 hours straight would result in a 50 minute break.

During the session, Burns said he went into shock three times. Thankfully, he had friends on hand at all times who had first aid training, but he admits he didn’t consult a doctor beforehand on the potential risks.

Burns required several witnesses to rotate shifts throughout the session, two timers, and photographic evidence to be able to submit to the Guinness Book of World Records. His submission is in, so now he’s just waiting to hear back – although he’s confident his 50 hour, 57 minute time will be sufficient.

Currently Burns is on tour in B.C., making stops in Kelowna, Merritt, Kamloops and Penticton with other performers. You can catch him in Vancouver at places like Sin City Fetish Night performing his speciality – fire breathing.