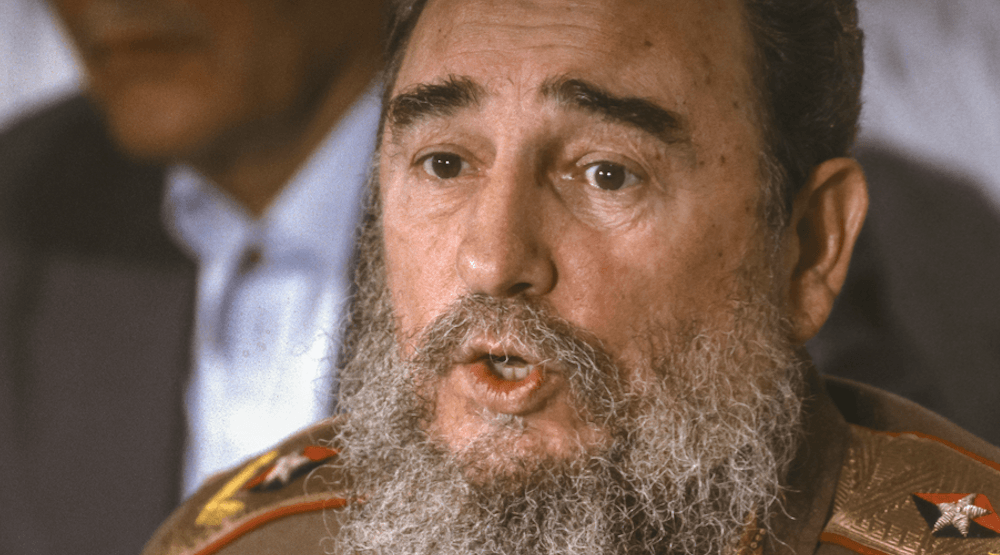 Fidel Castro during a news conference in 1989. (Rob Crandall / Shutterstock.com)

Cuban revolutionary leader Fidel Castro died on November 24 at age 90. Castro, built Cuba’s communist state and battled with the US for nearly five decades over his political regime. Known as a divisive figure, Castro was respected in many parts of the world for being a champion of socialism, while many accused him of brutally suppressing those in opposition to his regime.

Since 2006, Castro suffered from extremely poor health and two years later he officially ceded power to his younger brother Raul, who announced his death on Friday. Castro’s passing has received a mix of tribute and condemnation from across the world.

The Philippines’ police chief Ronald dela Rosa fought back tears and promised to stand by President Rodrigo Duterte at a Senate inquiry on November 23. Dela Rosa, who often goes by “Bato” (Rock), responded to several hours of testimony from Kerwin Espinosa, a confessed drug dealer and son of a mayor who was killed by police while in prison. Dela Rosa responded to the testimony by committing to fix the country’s police system.

“I’m not superman, I’m an ordinary policeman,” he said. “But I’ll do my best to clean the police force even if it will cost my life. We will survive this,” he said.

Over 70 people were killed, most of them Iranian Shi’ite pilgrims, by a suicide bombing near the Iraqi city of Hilla on November 24. The Islamic State (IS) claimed responsibility for the attack. The pilgrims were travelling back to Iran from the Iraqi Shi’ite holy city of Kerbala. They stopped at a gas station that had a restaurant for a break during the journey. Five buses filled with pilgrims were torched by the blast from a truck filled with explosives, according to police officials.

Colombian President Juan Manuel Santos and FARC leader Rodrigo Londoño signed a peace deal on November 24 to end Latin America’s longest war for the second time this year. In October, Colombian voters rejected the first version of the peace deal in a referendum. The new peace deal will go to Congress for approval.

Authorities in Vietnam have seized 619 kilograms  (1,362 pounds) of ivory smuggled into the country from Africa. The ivory was discovered on November 24 at the Cat Lai port in the southern commercial hub of Ho Chi Minh City. The smugglers disguised the ivory by packing it in wax and using wooden nails to avoid x-ray checks.

6. 13 detained in China over construction collapse

Hillary Clinton’s campaign will be participating in a vote recount in Wisconsin led by Green party candidate Jill Stein. Wisconsin’s election board approved the recount on November 25. President-elect Donald Trump called the effort “ridiculous,” adding that it is a scam by the Green Party for an election that has already been conceded.”

Syria’s White Helmets civil defence volunteers apologized for making an “error in judgement” after they recorded a #MannequinChallenge video in order to draw attention to the crisis in Aleppo. The video was created by the Revolutionary Forces of Syria (RFS), an opposition media group, who have since apologized for filming their take on the social media craze.

“This video and the related posts were recorded by RFS media with Syria Civil Defence volunteers, who hoped to create a connection between the horror of Syria and the outside world using the viral ‘Mannequin challenge.’ This was an error of judgment, and we apologize on behalf of the volunteers involved,” they said in a statement.

A powerful 6.9 magnitude earthquake rocked Japan on November 22. There were no reports of deaths or serious injuries but it did generate a small tsunami off the coast of the Fukushima region. A wave of 1.4 meters was recorded off the coast of Sendai (70 km from Fukushima).