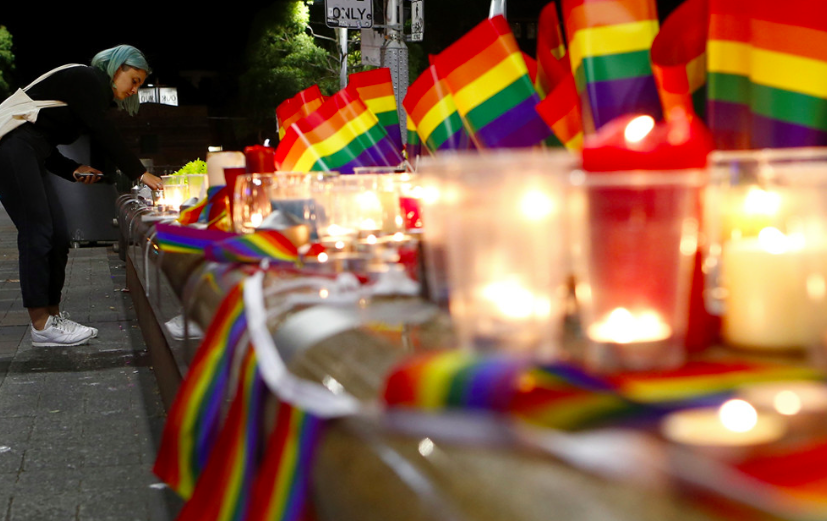 Daniel Munoz/Getty Images
Each week, we bring you a roundup of some of the biggest stories making headlines around the world.

Here are nine things that happened  last week that you should know about (in no particular order):

On Sunday, 49 people were shot and killed at Pulse nightclub in Orlando, Florida. The club was a gay bar and a popular spot for the LGBT community in the area. The killer was identified as 29-year-old Omar Mateen, who pledged allegiance to ISIS before the attack began. Vigils have been held across the world to show solidarity with the LGBT community and in memory of the victims.  This was the deadliest mass shooting in American history.

“Seeking heavy elements in the early Universe is an essential approach to explore the star formation activity in that period. Studying heavy elements also gives us a hint to understand how the galaxies were formed and what caused the cosmic reionization,” said the study’s head researcher, Akio Inoue.

Disneyland officially opened its doors in Shanghai, China, on Thursday. Communist party leaders, Disney characters, park visitors, and Disney CEO Bob Iger were in attendance at the grand opening ceremony. It is the first theme park to open in Mainland China.

“This is one of the proudest and most exciting moments in the history of the Walt Disney Company,” Iger said. China has invested $5.5 billion US into the project, with hopes it will revive the slowing tourism industry in the country. Analysts predict Shanghai Disneyland to be the world’s most popular theme park with as many as 50 million visitors per year.

British Member of Parliament Jo Cox was shot and killed on Thursday. She was getting ready to attend a meeting for constituents in Birstall near Leeds when a man shot her several times. It is still not clear whether the gunman was targeting Cox directly. The 52-year-old suspect is now in custody.

“We are not in a position to discuss any motive at this time, and we are not looking for anyone else in connection with this incident at present,” said Chief Constable Dee Collins of the West Yorkshire Police in a news conference. Condolences have been pouring in for Cox, who was known for her work helping Syrian refugees.

Violence and fighting took over the streets of Marseille, France, on Saturday as fans of England and Russia’s football teams rioted over the game ending in a 1-1 tie. Violence broke out inside and outside the stadium and police used water cannons and teargas to tame the crowds. Sixteen people were hospitalized and at least 36 were arrested for participating in the riots. The UEFA board has warned England and Russia that they could be kicked out of the tournament if the violence and rioting continues.

The body of two-year-old toddler Lane Graves was recovered by authorities after an alligator dragged the boy into a lagoon at Disney Land Resort in Orlando, Florida. Graves was snatched by the alligator on Tuesday evening at Seven Seas Lagoon located near the Grand Floridian Resort and Spa at Walt Disney World. The toddler’s father tried to fight off the animal but it was too strong. Divers found the boy’s body 16 hours later.

“The family was distraught. But also, I believe somewhat relieved that they were able to find their son with his body intact,” Orange County Sheriff Jerry Demings told reporters.

Venezuela police have arrested over 400 people after they were caught looting and rioting during a nationwide food shortage. The country has an inflation rate of 180 per cent, forcing citizens to wait hours in lines for food. At least 100 shops were looted and one person was killed in the riots.

Over 100 Canadians are on an ISIS ‘kill list.’ The Middle East Media Research Institute (MEMRI) discovered the list on pro-ISIS social media accounts. The list contains the names of 8,300 people including 151 Canadians. The Canadians on the list are mostly women from smaller cities across the country. All of the names appear to be picked at random. According to CBC, most personal information on the list, like email addresses, were hacked from sites like MySpace and Adobe. The RCMP will be notifying the Canadians whose names are on the list.

9. Extremists kill Canadian in the Philippines

An extremist group in the Philippines has killed a second Canadian hostage. Abu Sayyaf held Robert Hall captive since September. They ordered the Canadian government to pay them $16 million by June 13. The demand was not met and Hall’s death was confirmed on Monday. Prime Minister Justin Trudeau stood by his decision to not pay ransom for hostages.

“I want to reiterate that terrorist hostage-takings only fuel more violence and instability. Canada will not give into their fear mongering tactics and despicable attitude toward the suffering of others,” Trudeau said in a statement.